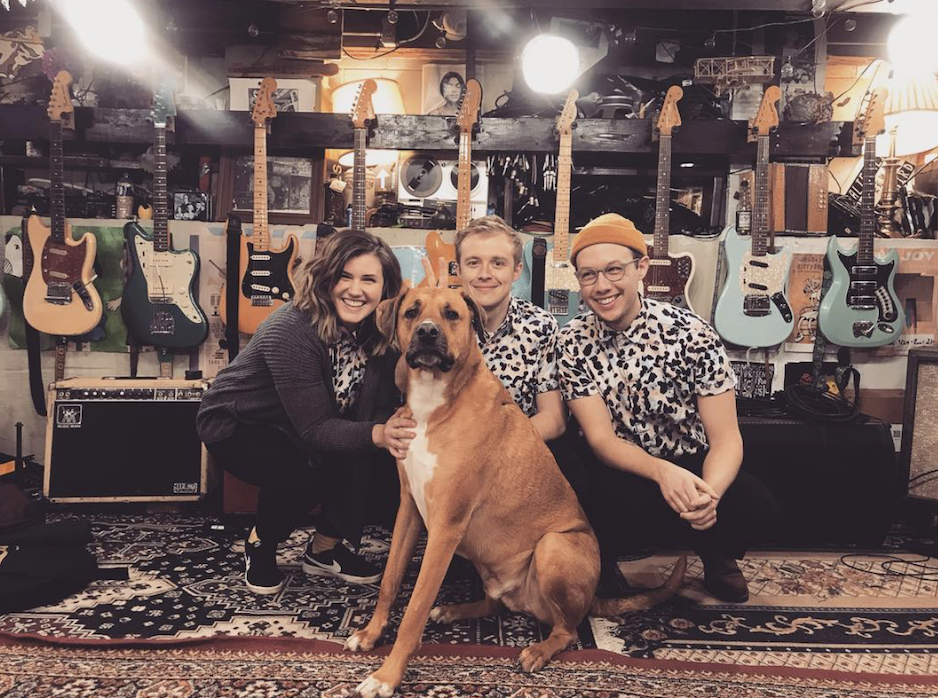 Pregnancy, Profits, and a new EP: A Profile of Siblings the Band

On May 13, 2019, Scapi Radio sat down with the Chicago-based band, Siblings. Some of the following article’s information derives from that interview.

After a deep scour of Siblings’ social media accounts, I’m happy to find the band performs in matching shirts––often collared and haphazardly splotched with a phenom of colors. In their May 28 Instagram post, the trio publicized a retro-filtered, casual image of themselves in coordinated shirts playing at The Newness, an experimental and ever-evolving space in Chicago. It has 48 likes, or 49 if you count mine.

But no matter what picture I see, I can’t stop myself from wondering how their drummer, Sarah Giovannetti, would have looked in the dress code whilst eight months pregnant and recording their EP Revelry last summer. Her bursting belly would have been easily uncomfortable buttoned into the wardrobe, and a then-unnamed baby Luca would have squirmed relentlessly inside her. But she did it.

Their Instagram account, rivaling over 1 billion others for likes, comments, and follows, encapsulates the band’s simple aesthetic all too nicely. They are truly ordinary (I mean, their one female member revels in the struggles of motherhood while attending weekly band practice). “Siblings is Max, Kevin and Sarah,” their Instagram bio reads plainly and sharply.

I would argue they follow no genre, no predisposed idea, and no restrictive direction. “There wasn’t even a theme to the EP,” said Giovannetti cavalierly. “We more just wanted to, as a band, get some work out there.” It’s five songs long, starting with their first ever bop “I Can’t Stand,” which the band defines as its “safety song.” Each time they play it, it’s the same––familiar and comfortable vibrations on their vocal chords and instruments. Two songs brandish grey explicit symbols for the nonchalant swear words snuck into the melodies.

The record’s defining line, the one a listener would scream while singing along, is stereotypically rebellious. I can’t stand how much I wanna drop out of school, the EP’s opening song repeats endlessly. When the memorable lyric joined the barrage of notes and words that complete “I can’t stand,” band member Max Mckenna (a rockstar name if there ever was one) said “it felt like magic.”

But the group, all in early thirties, presumably left school and its hoard of rules years before. The lyric then reminds listeners of their desire to disrupt an industry that melds music and money.

Through the lens of consumers, musicians are often A-list celebrities. Ariana Grande amassed a cult following of ponytail copycats in her rise to fame, and Metallica’s music made them a household name and a team of walking investments. The industry evaluates itself on the number of times a song is listened to and number of concert tickets it sells, because what other ways are there to evaluate? But smaller musicians like Siblings live on, all while making music for pennies (for reference, Spotify and Apple Music pay $0.006 to $0.008 per play).

So Kevin Greene, Mckenna, and Giovannetti work day jobs outside of their musical pursuits. As a result, the “school” in the lyric represents a larger system of heretic work that overtook their lives and originated in a need for money. While enduring the cyclical nature of corporate life, the musicians find time to prioritize their true love: the art. “We are taking it as far we can despite whether or not it’s makes us any money, because it is a really corrupt idea that you need to be financially successful in your art to continue making it,” said Giovinetti. “That is why [the world] is in crisis.”

Siblings arose from the rubble of Beauty School, another Chicago-based group comprised of the trio and their friend who moved to California. The three firmly hold onto their stance that Beauty School is not dead, simply on pause. But when the fourth member fluttered to the West Coast, Giovannetti, Green, and Mckenna assumed they would stay together because of their undeniable musical chemistry.

In the DZ records video of their unreleased song “The Waiter,” this chemistry plays out in effortless moments. There’s Gionvinetti’s smile to the singers at the 19-second mark and the manner in which Mckenna sways to Greene’s breathy singing throughout the song. There’s cohesion.

The Beauty School hiatus ultimately benefited the artists, allowing them to, in the words of Greene, “bring whatever they had cooking up to the table.” Their self-proclaimed hits arise from a “dumping ground” of their creativity after their escape from the old band’s brand. They “rock out harder” as Siblings, a fact the collection of headbanging bridges in the EP proves.

The trio unleashed a sprawl of recordings, riffs, lyrical phrases, and other musical hodge-podge into a Google Doc after gaining independence. Everything from “Jars” with its dainty falsetto to quickly accelerating “Sunbear” began on those virtual pages.

When the Google Doc escapades created five songs they were confident enough in to record, Siblings turned to mixing engineer Dan Tinkler, a tattooed and mustachioed man seemingly manufactured for the underground music scene. In only a day-long recording process, Revelry was born. Now it serves as a time stamp in the bandmates’ lives as well as a musical outlet for their audiences. “What I like about recording is that it’s very much a snapshot of your life during that time,” said Giovannetti nostalgically, almost longing for last summer’s pregnant recording expedition. “I can show my son in the future and be like ‘Hey, you were almost a person here.’”

An unabashed “<1,000” symbol resides below each of their songs on Spotify today, indicating that none of the songs have surpassed a thousand listens. But the numbers are not why Siblings is in the game; it’s because of the age-old story of a love for art and a passion to create it.

“Let’s just keep doing this thing that we love and putting it out there,” said Giovannetti. “And if people like it, awesome. And if they don’t…”

Listen to Siblings on Spotify, Apple Music, and Bandcamp or find out more about them on their Instagram.