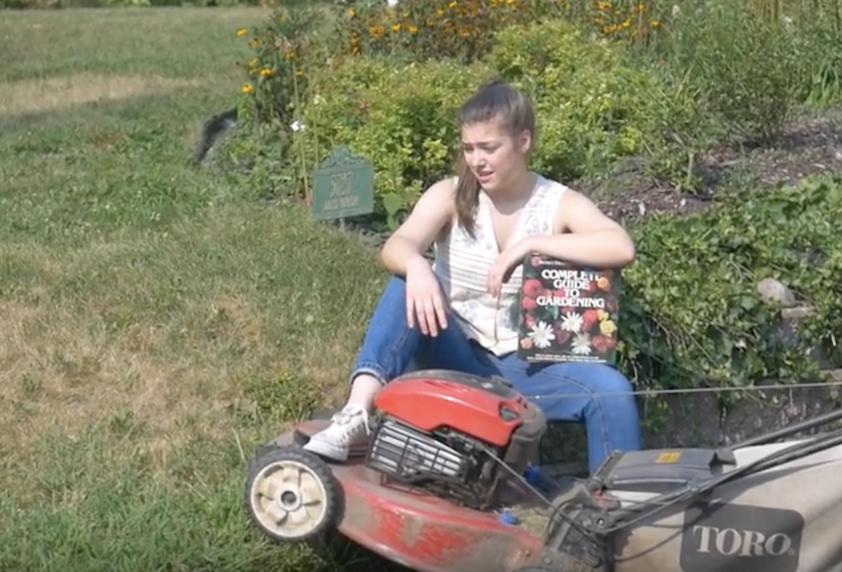 Friendship, Flowers, and a Web Series: A Conversation with the Creators of Garden Doc

Pictured above: A screenshot of Laura Nelson in episode one of Garden Doc

On May 23, 2019, Scapi Radio sat down with web series creators Evelyn Landow and Laura Nelson. Some of the following article’s information derives from that interview.

The urban legend about eating dirt lives on.

Some parents swear kids who digested dirt in their primal youth are stronger and more resistant to the ever present threat of germs now. But in the five and a half episode web series titled “Garden Doc,” Laura, its pigtailed protagonist, eats a mouthful out of sheer desire and an affinity for its gritty taste.

“I love nature,” she screams in episode two after stuffing the palm-sized pile into her mouth.

Her love for dirt resurfaces a few more times in the 17 minute long season. But Evelyn, the cameraperson stooped behind the lens, and Lureena, the kooky garden expert, are quick to brush off her childish urges.

Laura’s compulsion to consume soil captures the innocent nature of Garden Doc, a pseudo-mockumentary style series following a girl with little knowledge of gardening. Laura Nelson and Evelyn Landow, the creators of the web series and namesakes of their own characters, built the story to be idealistic, light, and unaffecting. With a plot laden with geese, sunshine, and finger painting, Garden Doc offers almost no exploration of pain. “We had too much to figure out to make something so serious and personal,” said Landow, the filmmaker of the creative pair. “We needed to make something that’s easy and personal, something that’s still us.”

The characters, Evelyn and Laura, hold steadfast to their goal: film a documentary on gardening. They retain a visible lack of expertise on the subject and never explain the reasoning behind their dedication. No questions on the matter are asked or answered, either on camera or off.

On their first day of writing, Landow turned on the camera for a session of improvisation that sprouted the base of the storyline. The ten minute recording created a few usable bits. The back-and-forth based itself in the pre-existing objects around them: household objects, books, a garden. “From there, it blossomed,” Landow said. Nelson, a graduate of acting from New York University, turned to Landow with her performance instinct to ask for an explanation or backstory after they picked their topic. Why gardening? But they eventually chose not to answer.

Garden Doc fuses the boundary between a real person and a character. Landow and Nelson play themselves in an idyllic world with an all-consuming goal, and they mirror their true relationship in pixels on the screen. “It was just kind of where our relationship was living, where our friendship was living,” said Nelson. “That’s where Garden Doc is.” The creative process crawled forward as their friendship rekindled; the old high school companions drew closer as they delved into the project after reconnecting post-college.

As Laura is derailed in the series by her love for Josh the plastic goose and her intermittent breakdowns over how little she knows about gardening, Evelyn acts as a reasoning force. Once, she mediates the unspoken quarrel between Laura and Lureena. Another time, Evelyn’s conversation with Laura’s sister, Annabelle, reveals the cameraperson may also be the protagonist’s only friend. The characters balance each other out, much like the way the creators did in their writing and filming sessions.

“[Garden Doc] is intimate-comedic,” said Landow when questioned on the series’ genre. With a classification of its own, Garden Doc does not insight laughter, but rather a sly smile when Lureena flaunts her collection of green and when Anabelle chooses laundry over Laura. There are moments of tenderness between Josh and Laura (most notably, their sweet goodbye in the finale), between Evelyn and Laura (their exchanges of doubt), and even between Laura and the audience (like when she admits to the camera that she did not know it was autumn).

The perfectionist nature of Garden Doc’s world adds to the series’ ease. The sun shines endlessly and cooperates with Laura’s pastel wardrobe to deliver a continuous Easter-esque vibe. A peanut butter and jelly on a hot dog bun stands as a viable midday meal. And everyone in the show is gendered correctly by close friends and strangers alike––a vital addition for the series’ often-misgendered director.

“[Gendering Evelyn correctly] was a way of offering up a character into a world and a world into a world in which she’s treated as a person,” said Landow. “It’s nice.”

In addition to its attentiveness to audiences who fall throughout the gender spectrum, Garden Doc accounts for the needs of those who can’t see what graces the screen. Landow and Nelson wanted to make their series enjoyable for everyone and decided offering audio descriptions was a necessity to meet this goal. “It’s kind of the bare minimum thing,” they said. “If you’re making something and you’re trying to make it accessible, then you should do that.” The descriptions take heed from their friend who creates them professionally for local theatre.

Nelson and Landow are edging towards something more serious and connected than the webseries in their partnered future. Garden Doc looped a love for flowers into a story of budding friendship and naive confusion; it rooted itself in symbolism and a sophisticated lack of intricacy. The pair served the series wholly as the founders, writers, directors, and actors (surely, with a considerable amount of aid from other creatives).

The quaint plot arc and unattended ending represented Landow’s debut venture into comedy and Nelson’s only time being responsible for more than her on-screen performance. In their own words, the project “emanated happiness” through every step, from writing and filming months ago to the year of editing that followed.

But as the series reaches a close after six uploads on Youtube, the creators doubt its existence would have materialized in any other way. “This is the only way [Garden Doc] would have happened,” said Nelson. “Because we made it happen.”

Watch Garden Doc here, and listen to the full podcast with Landow and Nelson here.