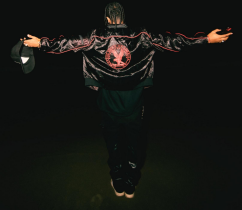 ChoMbae Emerges with New Music Pack ‘After the Party’

Dating back to October, 2018 ChoMbae began releasing singles, including one 4-track compilation project, ‘Skars’ and his most recent release, a two-track single titled ‘After The Party’. With another single due this summer, the artist boasts a solid fanbase with even more consistent quality and progression of sound.

Honing multiple facets of contemporary pop, ChoMbae’s sound has been compared to Trey Songz, The Weeknd, dvsn, Salatiel (Beyoncé’s ‘Black Is King’, ‘Water’) and Chris Brown. His migrational upbringing is prevalent in his music, fusing smooth and catchy beats with lyrics that touch a range of contemporary narratives of love, loss and good times.

“I’ve been making music for three years and [a] half. I always grew up listening to music and growing up in the church so it’s always been a part of my life.” ChoMbae said.

As soon as he could talk, ChoM–a shortened moniker–was singing in the choir at a church in Shashamane, Ethiopia. In his preteen years he and his family moved to Minneapolis, MN–where he now considers home.

“What got me into music was growing up in the church my whole family’s Christian my mom, she would wake me up early in the morning I was part of this choir called ‘Young Voices'” ChoM said.

He reflects on his early years in Shashamane where he learned American Gospel music from Filipino/a and other Ethiopian-International directors in music ministry.

In addition to his mother, ChoMbae also attributes his love for music to his elder brother, Kamawak, an instrumentalist and producer.

“He [was] always, like, obsessed with Gospel music, he loved Michael Jackson, he loves Usher and what’s his name, R. Kelly. And he would play the instrumental, you know, on the keyboard and he would hand me the mic to just kinda like, ‘Sing, something on this!'” he said.

Upon hearing ChoMbae sing, many people encouraged him to pursue a career in music. After a few years of appreciating these affirmations, ChoM finally began writing and recording when his brother began supplying him with instrumentals.

Although the artist is paving a lane in a Pop form, his practice in writing and recording is much like that of the most high concept of artistic processes you can imagine.

“I don’t limit myself to a certain type of sound, if it’s pop you can’t always stick to one sound. I feel like you gotta explore. It’s music and you have to enjoy the process of making different types of music.” ChoMbae says.

This process-centric model of art making is what a lot of us went to school for. ChoMbae further expounds on his process:

“I write music off [of] my perspective. Sometimes I create a character. It can be either from my friends or something that I’ve seen, I just really write about the music and the moments and things that I can see around what’s going on.” He iterates the time-honored principle of writers writing what they know.

Unrelated but @TheOliviaLilley recently wrote an editorial on The Myth of “the Writer”. Writers of all mediums will enjoy.

Upon developing a catalogue which now amasses 9 singles–an LP, EPs and one full-length album–ChoMbae has refined his skills and polished his brand to match that of well-pushed recording artists represented by major labels. Find video content which includes visualizers for select tracks on his YouTube channel.

We asked ChoM about his intentions for mainstream success given his relativity to popular genres. Like most performing artists whose career exposes them to well paying or notable work, ChoMbae believes labelship in music can be an ideal option for a recording artist.

“I don’t think it’s a bad thing. if it’s a good thing for you and you have the right people around you, you know, that care for you as an artist. Do you feel like a family or more just like selling yourself or your soul?” He says.

ChoMbae, who is currently unsigned, is managed by a self-assembled team that he considers family.

ChoMbae’s musical influences include, among others, Chris Brown and The Weeknd. ChoM’s contemporary tenor tone and experience singing gospel music made it inevitable for him to learn and love a number of the artists’ hits when they debuted in the U.S.

The influence the Weeknd has on ChoM is uncanny, having discovered his music as a preteen when The Weeknd was just beginning to take off in the states. Coincidentally, both ChoMbae and The Weeknd are first-generation Ethiopian-North Americans.

With a unique voice of his own, ChoM is sure to attract success in the music industry akin to that of his influences.

Be sure to check out his latest and upcoming releases on your preferred music streaming service this Summer.