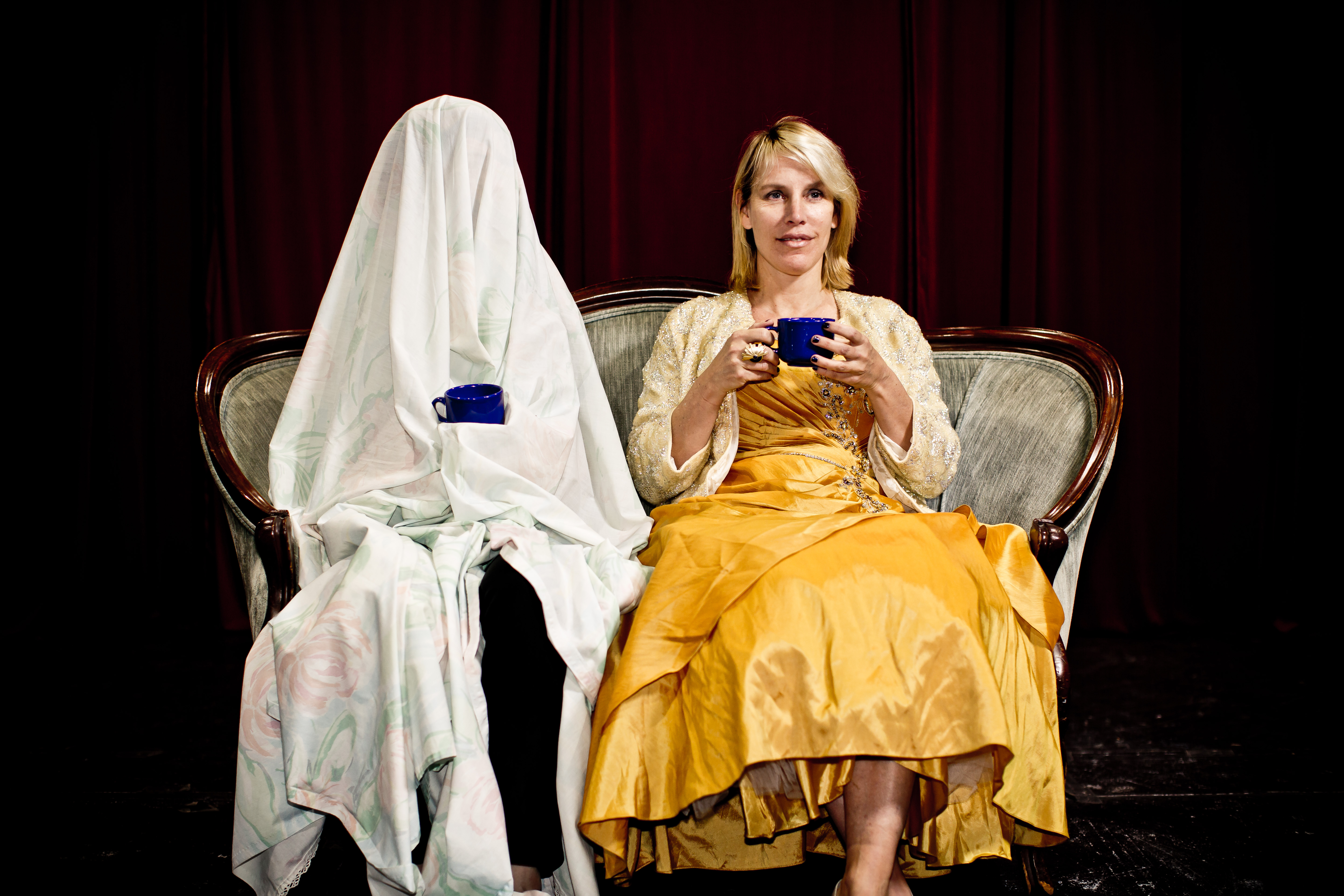 Pictured above: Julie Williams and Kelly Anchors in The Near Future & That Sort of Thing/Photo: Jeffrey Bivens

And though it is the longest running “fringe festival” in Chicago, it doesn’t quite fit with the standard form of the concept. Whereas a traditional fringe festival features mostly amateur productions that turn up uninvited and add their artistic efforts, Rhinoceros Theater Festival (also known as Rhino Fest) is deliberate in its choices of artists and productions.

In its history, Rhino Fest has been curated by Beau O’Reilly, Jenny Magnus (both of Curious Theatre Branch), Scott Vehill, Brün and others. This year, Magnus and Brün return to the curation team; they are also joined by incoming artistic director of Prop Thtr Olivia Lilley and five-year Rhino Fest veteran and Curious Theatre Branch member Julie Williams.

While many other festivals that focus on new and experimental work have the tendency to fizzle out, Rhino Fest comes back each year and continues to operate on the pay-what-you can model they have had for 29 years.

“How can something so ramshackle, so shoestring-dangling and fringe-abundant, work this well, for this long?” Williams said.

Brün attributes the success of the festival by the combination of maintaining long term relationships with artists and inviting new artists to come in and try out their ideas.

“There are important people who have come through here and made their mark,” Brün said. “Likewise, there are people coming in and I don’t know what the heck they’re talking about! And it’s really important to put them up on stage, too.”

Brün also credits O’Reilly’s influence and sensibility to “not take themselves too seriously” as a part of the Rhino Fest’s duration.

“At the end of the day, if you make theater, you have to enjoy people coming into a space and making something,” Lilley said. “That has to be enough. If you are dissatisfied with that, then go do something else.”

To curate the Rhino Fest performances, Brün actively combats against provincialism in performance.

Rhino Fest’s “lore” is in the work put forth by O’Reilly, Magnus and Brün. Williams also finds that Rhino [Fest]’s distinct charm is to include “extreme variety, art surprises, low-budget-low-tech shows… and a deep care and sweetness in the people who make the whole thing run.”

“There’s a free-wheeling vibe balanced by the intimacy of the Prop Thtr’s space, which is unlike other fringe festivals I’ve been a part of,” playwright and second time Rhino Fest participant Jake Green added. “It feels much more like a community.”

DIY at the roots

Returning Rhino Fest choreographer, dancer and tangential theater artist Shalaka Kulkarni was initially invited to perform at Rhino Fest by Magnus. Kulkarni has seen the breadth of work displayed at the festival evolve in “ideas and art forms.”

“My first impression of the festival was that it was a breathing room for artists to experiment and grow,” Kulkarni said. “That gives artists like me a chance to be brave because of the safe environment created by the team. That in turn has helped me experiment, grow and show a refined versions of work anytime I am invited to present there now.”

This type of encouragement lends Rhino Fest to the spirit of DIY theater and performance. The low-stakes barrier-to-entry is also evident in the application form. The application requires no fee and no script; artists are simply asked to provide information on their background and their work.

“It’s much more important that you spend time working on your script than putting together the dream production of it,” Lilley said.

Brün is focused on getting new work on stage for Prop Thtr.

“Theater survives best if it continuously gets rid of itself,” Brün said. “However, there is an enormous amount of pressure on artists to be absolutely innovative.”

“But in order to do something new, you have to be derivative in some way,” Lilley added.

Kulkarni found a freedom within Rhino Fest in which she was able to explore her current dance style and form.

“I feel much more confident in presenting my voice and that was not that case before Rhino Fest,” Kulkarni said.

Another returning Rhino Fest artist, Paul Brennan, had his first play at Rhino Fest when he was still finishing high school.

“[In my first Rhino Fest], I learned that the process doesn’t end after the last show, any more than it ends before the first reading,” Brennan said.

Now, Brennan is working on a movement piece within the current run of the festival.

“I’ve taken inspiration from the diverse group of shows that are put on every year,” Brennan said. “[Rhino Fest]’s reputation as a fringe theater festival might create the idea that it only embraces the experimental, strange and nonsensical, but fringe is about a freedom. It’s not about restraining artists to a theme, but assisting them with an ideal. The idea of “anything goes” is, oddly enough, not limiting.”

This freedom also allows for a conversation between artist and audience. Brün points out that the common separation between audience and producer is a wrong paradigm.

“We think much more of what the word ‘festival’ really means, and that’s a coming together of makers,” Brün said.

Many of the audience members attending Rhino Fest are makers and artists themselves, with a potential to be involved in a future Rhino Fest.

To the artists who keep returning to Rhino Fest, Brün plays an imperative role in his encouragement and steadfastness in putting their work on stage.

“Stefan [Brün] embodies the philosophy of Rhinofest, the idea that performing a work is part of the process, and not the end of the process,” Brennan said.

Williams agrees and finds Brün to be “a superhero of venue management” and also gives a nod to Marlana May Carlson, who does logistical work and technical support for Prop Thtr.

Magnus and O’Reilly receive support and appreciation from the artists, especially in their continued efforts to showcase their own work at Rhino Fest, which ranges from polished repertoire to experimental, free-form pieces.

“From listening to what my vision is, to making it better by helping me with logistics, to going out of their way to give me feedback when they get a chance to see my work… [Magnus, Brün and Carlson] make me want to be part of Rhino Fest whenever I have something new to present,” Kulkarni said.

As the incoming incoming artistic director of Prop Thtr, Lilley focuses on inviting young artists who she thinks can shine in Rhino Fest.

Lilley feels that young directors often get ignored or taken advantage of in Chicago theater. She wants to encourage all young artists to let go of their shame, to champion their work and impulses instead of keeping those ideas and conversations hidden away.

“It’s great to see all these young people searching,” Lilley said. “It’s great to be able to have coffee with them and not be scared of putting their ideas—their wild and conceptual ideas—out there.”

A festivus for the future

Lilley hopes to frame future Rhino Fests as an opportunity to get involved with Prop Thtr. Applying artists get a chance to work in the Prop Thtr and decide if they like the space.

“We also want to be involved in an artist’s journey,” Lilley said. “We want to set up a ladder of growth. I want people to feel like they have a chance to engage here with all of us.”

Williams hopes that for the festival’s 30th anniversary, Rhino Fest will re-engage with its venue diversity.

“One never knows what one will get at the Rhino Fest,” Williams said. “And there’s the fun.”

And Brün wants to increase the intersectionality of artists and audiences that the Rhino Fest draws. Lilley agrees and encourages people to bring their “weird, great ideas” to Prop Thtr.

“There is a sense of something exciting, strange and ambitious happening here,” Lilley said. “There’s a hunger for that. And people will come out and see it.”

Rhino Fest performances occur Wednesdays through Monday nights at Prop Thtr, 3502 North Elston Avenue through February 25. The complete Rhino Fest performance schedule can be viewed at rhinofest.com. Tickets can be purchased through the website, via email at proptheater@gmail.com, by phone at 773-742-5420 or at the door. For more information, visit propthtr.org and curioustheatrebranch.com.

Published in Art, News and Theater