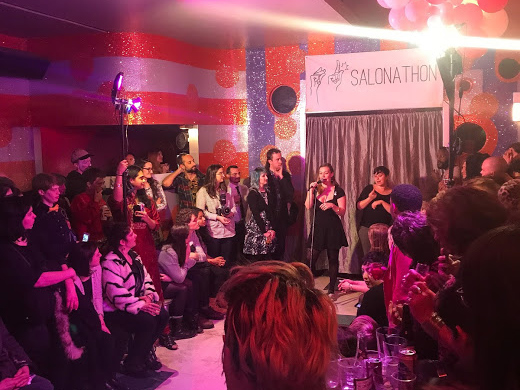 (I was not sure what time to arrive or what to wear, so I scurried to Facebook to see if I would need Nair. I decided on a Lion onesie from Target with big hair and to arrive around 8 with time to spare.)

(I wanted to charm you with some rhyming, but now I am all out of poetry because I am about to talk about the line situation (which I was totally fine with because it was like an offering to you).)

I arrived at Beauty Bar at 8 PM. I saw a line filled with interesting and beautiful people. I spotted a glorious fur around the shoulders of someone, who looked like the edgy model from my dreams, talking to a true dame in dramatic full length black and white coat that slayed me and resurrected me.

After about 15 minutes of grooving to Lorde’s Melodrama album, I realized the line hadn’t moved. I buckled up for a longer wait and chatted with my fellow line people. I met a lovely man that had just moved to Chicago after being in Paris for 10 years. He is from South Bend, Indiana and we got to talking about the DIY scene there. Did you know South Bend had a hopping DIY scene? Me neither. So cool!

I also met a woman who has lived in Chicago for 10 years. We talked about how you can’t really say you are from somewhere unless you done a full decade in one city. I agreed with her. You gotta earn your stripes. Around 9:30 PM we were at the front of the line and I was officially ready to meet you, Salonathon. No one had complained or said “this better be worth it.” It’s like everyone knew you would be more than worth it. I also figured you had to be pretty special if so many wonderful people would wait outside in a Chicago winter for you.

I was right. As soon as I stepped into the space, I felt an electric energy race through me. I looked to my left and the glow of that good, good professional photography lighting warmed me up right quick. I looked to my right and saw that people were getting their nails done. I walked further into the room and the walls seemed to glisten white, orange and purple (Whatever wallpaper Beauty Bar uses I would like my apartment done in same material). There were balloons hanging down and a simple sign that had two hands making a snapping motion. Your name was emboldened next to the hands: “Salonathon”. It was invigorating. I wondered if I had accidentally taken acid because everything was sparkling and moving, but I quickly realized that that feeling was simply because of you.

I strutted to the bar in my Lion onesie and converse wedges to grab some water. I’m a good southern gal so I always try to say ‘excuse me’ when weaving through a bar but I rarely experience others acknowledging those efforts. I would say “excuse me” in my higher pitch “sorry about this” voice and people actually moved. They would say, “Oh no problem, here you go!” and make a path. No one was pushing, shoving or giving me evil glances. People had manners and patience? In a bar? What witchcraft is this, Salonathon? I’m into it.

I talked to a few people at the bar and they said they had been there almost all day. Your last Monday at Beauty Bar was 12 PM to 2 AM. That’s a fucking marathon. Oooh. I get it. Salon like the French art exhibition and marathon as in long distance running. Clever. Like the famous Parisian art exhibitions and discussions, you gave space to so many artists throughout the day; but unlike salons, you gave the artists the same light. Each hour was curated by one of your parents and contributors. Jane Beachy, Will Von Vogt, Joe Varisco and Bindu Poroori have raised you well and I know it is because of them, and so many other people, that the world got to see you.

At around 10 PM, your mama, Jane Beachy, grabbed the mic to welcome the audience. My night was just beginning but as she spoke, I realized this was an ending too. She talked about you and the people that helped raise you with admiration, respect and love. She thanked your fellow parents and everyone that supported you along the way.

No wonder you gave off such powerful energy. You were made from pure love. She got a little emotional—as to be expected when you actually give a shit about something—and transitioned into sharing the guidelines for the audience before the first act began. Jane asked everyone to “take care of their bodies, their neighbors’ bodies and their drinks” and then asked us to create an alley way for the performance. Getting everyone in a crowded bar to work together calmly and efficiently isn’t an easy task, but it happened seamlessly. It reminded me of the power we yield when we work together. It was also impressive and cool.

The first act was the one and only Darling Shear, with a dazzling number of expression and fan work. She started with singing along with a little “Diamonds are a Girl’s Best Friend” and as it picked up, off clothes came. Darling Shear used that alley we created and transformed it into a catwalk. She dance walked to the end of the alley and fell into a split. Casual. She then strutted her way back behind the curtains and emerged seconds later with two large feather dance fans. She used them as if they were extensions of her hands and it was exquisite.

This is the moment I buckled up for a wild ride. One after the other, artists you brought to this space made me think and snap and think and snap. You have created a home for so many people to explore their art and themselves. It was freedom personified.

As poets, dancers and singers graced the room, words were lifted up and clothes were thrown down. It felt that everyone was giving their all for you. Everyone lit this last night on fire because it had to burn. You had to burn brightly, so that something new could be born from the ashes.

“We must ask ourselves,” Coombe continued. “Is the suffering we know dear to us? Is it easier than dealing with a new suffering born of new growth?”

At its climax, the chant was being yelled by one and all. We all screamed in understanding that the death of you is not the end. You live in everyone that ever had the privilege to experience you. You created a safe space for people to explore the inner workings of themselves. This is how we discovered, and continue to discover, the ills of today’s society and the remedies to those ills. It’s how we uncover the problems and solutions of tomorrow, as well. These rooms are important.

Through experiencing you, I know I have the power to create a similar space everywhere I go. I can take all the love and acceptance you shared with into my heart and extend it to everyone I encounter.

As this idea was cementing itself into my heart and mind, I realized we had one last performance in this set. Dancers, led by Erin Killmurray, began to flood the performance space as Janet Jackson’s “Together Again” started to play. The introduction of the music played and the dancers came to the space hugging and chatting with each other. They seemed so happy to be there with each other. I knew they were about to murder it. I could see them getting into a formation and heard Erin Killmurray ask a fellow dancer “Can you count me in?” I loved that moment, because 5-6-7-8 seconds later Erin started the sharp and quick choreography as the tempo hit the ground running. All the dancers were having the best time and doing what they love. You gave them that freedom and they seemed to be dancing to show their appreciation. The audience could sense this too and as the music ended, everyone’s smiles got bigger. You could tell everyone was ready to dance.

As I watched everyone share in this moment of love and pure joy, I realized that I said hello to you that night and I prepared to say goodbye. I had thought this was going to be it. I thought this was the beginning and ending of you and me. I was wrong.

I thank you for all you were and all you will be. We will make fabulous things from your dead hide.

P.S. I have a Bedazzler so I intend to make you sparkle!