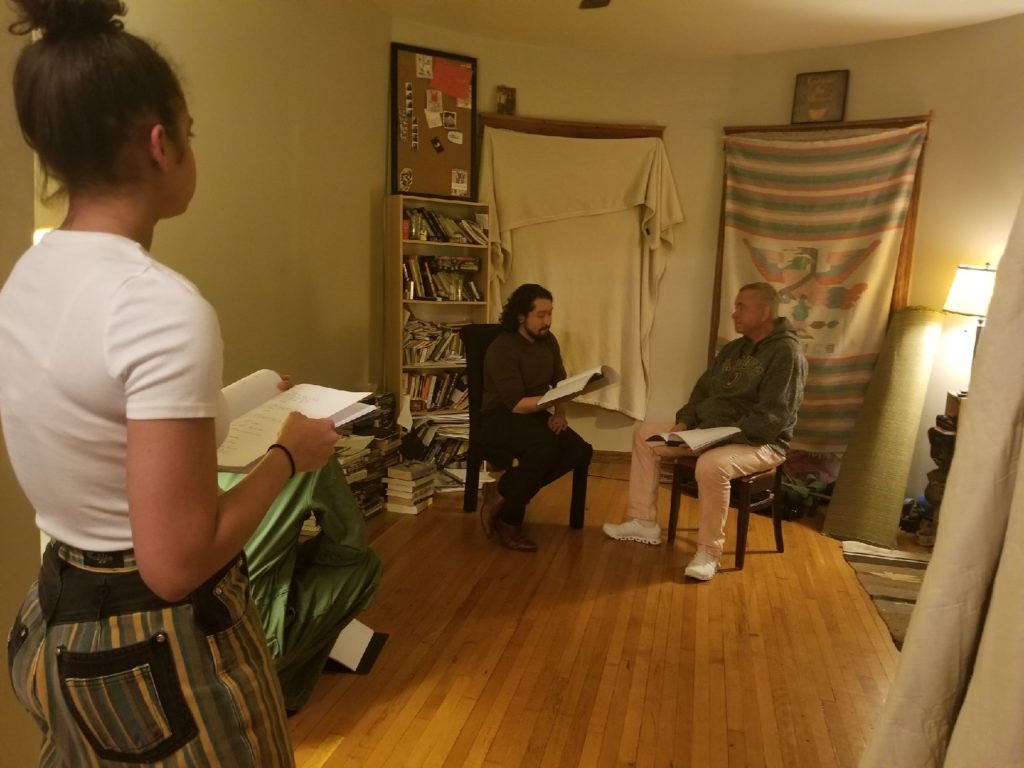 Chicago always feels like it is working in juxtaposition with itself. Like it’s moving on two different speeds at the same time.

If you’ve lived here long enough, you know that you can’t go a week without accidentally running into someone you know on the train, or at the grocery store, or when you’re just trying to get home from work on a Saturday night and you stepped in vomit in Wrigleyville. Maybe that last one is only me but either way—it’s big enough to get lost in, but not big enough to hide in. That can feel alienating.

This what the reading of Jo JB Schaffer’s play Dissolution at the Runaways Lab Series explores with the character Ralph. Ralph is 51, a virgin and goes to AA meetings everyday even though he’s never had a drink in his life. Coincidences cause him to question reality after he finds that the world is really, incredibly small—so small that in a city like Chicago, he could actually dissolve.

I talked with Schaffer and Sarah Patin, director of Dissolution and company member of the Runaways, about their upcoming reading.

How long have you been working on this process?

Schaffer: It’s probably been about four years now. I wrote the play my freshman year of college, did a couple readings of it and then had my first professional reading of it.

Patin: Jo pitched it to the company as a workshop/reading that he wanted to do and they needed a director. One of the company members was like, “Hey, Sarah! Do you want to do it? Is that okay?”

What has been your directorial style for the play, Sarah?

Patin: We’re doing a workshop/reading so the focus isn’t so much on creating this finished thing. I wanted to focus on this text, the soul that is in this text and the intimacy that is in the text.

I think readings can be very intimate experiences but you can feel very removed from the text and from the performance when it’s just a line of people with music stands in front of them. I know as a performer, when I have a music stand in front of me, I feel a little removed from my scene partners. So, I wanted to include everybody and make it more of an intimate experience. I’ve wanted to explore the text and honor that by doing as much as I can with as little as I can.

So what sparked the idea for this play?

Schaffer: You know, I’m not entirely sure how Ralph came to me. I started with this other character, Sam, who is Ralph’s foil. Sam, I guess, is the closest character to me, and I needed a character that was in similar circumstances as Sam that could be seen in an entirely different light. People would walk up to Sam and have a conversation with him. People wouldn’t walk up to Ralph and have a conversation with him.

It’s an interesting dichotomy. How does the world feel so small while Ralph still feels like he could be forgotten?

Patin: Chicago is such a unique city in that way. I had never lived in a city before I moved here and I remember feeling that same way, where it feels so small, Midwestern and people are friendly. There’s this phenomena in Chicago where I run into people all the time in really strange ways. You see a lot of the same people and a lot of you are working on the same thing.

But it’s still a city and it feels like there’s an infinite amount of things going on. You come to a place like this and you want to immerse yourself—or it sucks you in, in one way or another. You get lost in the hustle, you see all these people and you think that you’re living… But you stop and you realize, “I’m just rushing through. Not really connecting with anybody.”

I don’t know if this city necessarily lends itself to that kind of slowness that requires to create community.

Does that loneliness come from a purposeful act of ignoring from the people around Ralph?

Schaffer: I think, yes. There are times where Ralph says things that are indicative of what he’s going through, but at the same time, Ralph actively misleads people as to what he’s going through. He’s the kind of guy that will say, “Oh no, everything’s fine,” or [he’ll] leave out this one detail, or [he’ll] change these details to make a story seem so sad, pathetic, hopeless or strange.

At the same time, it’s hard to be vulnerable. It can be hard to reach out. Asking someone out or even something as small as just wanting to hang out can be a large act of bravery. How does Ralph try to reach out to others?

Schaffer: The way that we follow it, it’s people reaching out to Ralph in a sort of passive way. The first time we see Ralph is at the AA meeting. He gives the monologue about his day. Then the next time we see him, he’s at a bar for the first time and another character goes out of her way to talk to him—thinks he’s cute for whatever reason—and she pushes the conversation there. It really is Ralph expecting people to avoid him, and then when they don’t, he skates around how that goes.

The Runaways describes themselves as a DIY theater series and they make theater that is “stripped down to basic carnal and emotional experiences.” How does that manifest itself?

Schaffer: All you really need is the words on the page and I think The Runaways really holds true to that.

Patin: When resources are lacking, you kind of do what you have to do to make the shows you want to make.

It also just so happens that it’s really fun to make theatre that way. I didn’t really know anything about DIY theater when I first moved to Chicago. Some of the first theater I started doing was apartment theater. When I first got here, we were doing 24-hour theater festivals every month in people’s apartments with this one company, Bring Your Own Theatre (BYOT). They’re still doing it. It was really refreshing and really fun. It took the business out of it. It took the pressure out of it. It took the spectacle out of it and made it about telling the story and doing the story service the best you can with what you have. The world kind of turns into your playground.

Patin: I think our reading series are by nature more intimate. The reading series that we had before and the readings that we’ve done before have mostly taken place in people’s apartments or in small bookstores across Chicago. It’s always full of people involved with the show itself and a few close friends. People stumble in from the street and that’s really cool.

I think creating community on a small scale is really nice.

The Dissolution reading will be performed on Friday, April 13t at DC Torium at 3026 West Armitage Avenue. More information can be found on the Facebook event here facebook.com/events/409495399497200 or on runawayslab.org. The event has a $5 donation or pay what you can.