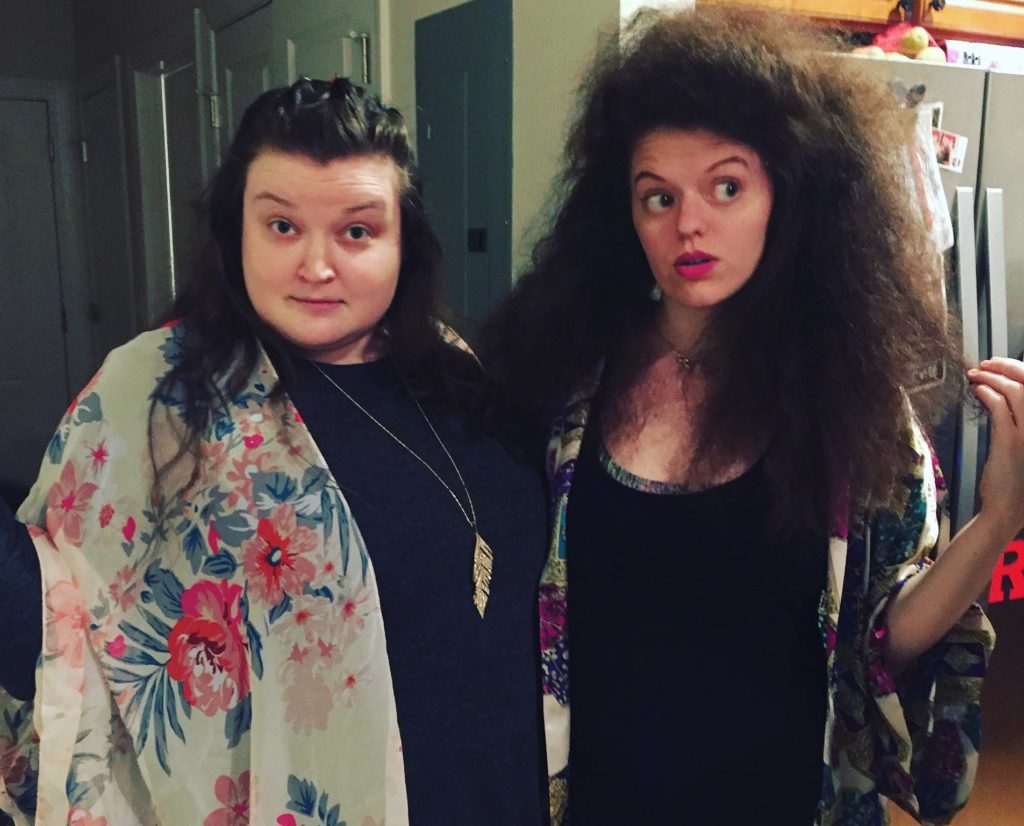 “Set the oven to 425,” Denise Yvette Serna said as I put the Trader Joe’s mozzarella sticks on a cookie sheet.

The snacks were in the oven and my silky robe from The Salvation Army was flowing as I buzzed around my Uptown apartment. The hustle had begun. Curators, artists and guests arrived at my apartment as I did a final brush through on the mop that is my hair. I felt a particular sense of responsibility for being the host for Pop Magic Productions’ third Homeset, a quarterly salon series bringing artists together to share ideas and showcase their works in progress, lesser practiced skills and interests in a casual atmosphere.

I wanted to uphold the long tradition of badass women creating a place of freedom for artists to explore—and I wanted to look fabulous doing it. I was inspired by the French women of the 17th and 18th century, who knew how to host parties and salons and looked flawless while doing it. Salons are typically associated with those centuries’ literary and philosophical movements. They often featured of gathering of folx discussing art and literature under the roof of one inspiring host (that’s me, obviously).

The first renowned salon in France was the Hôtel de Rambouillet in Paris, which its hostess, Catherine de Vivonne, ran from 1607 until her death. In the 1940s, salons were hosted by Gertrude Stein and included artists like Pablo Picasso and Alice B. Toklas. In Dena Goodman’s The Republic of Letters, she often wrote about the role of women within salons and the Enlightenment period as a whole, defending that “the salonnières were not social climbers, but intelligent, self-educated and educating women who adopted and implemented the values of the Enlightenment Republic of Letters and used them to reshape the salon to their own social intellectual, and educational needs.”

I was determined to bring the same spirit into home. (2018 could use some enlightenment, in my opinion.)

Before Sunday night, Serna connected me with the artists that would be gracing my home. The lineup was Korin Isotalo (a lovely songstress), Michael Mitchell Clauson (a “let’s fuck shit up” playwright), Aaron Aptaker (a mystifying magician) and Cassie Bowers (a spellbinding reader of tarot and poetry).

I could not believe it. This was way too much cool for my apartment. I immediately saged the place and made sure the energy was ready for these fabulous folx. After getting the energy prepared, I had to get the actual space ready. I cleaned my apartment from top to bottom. I then prepared a spread of fancy sounding cheeses, mozzarella sticks, mini tacos and cheese puffs (Vegans we will work on the spread for next time, I swear).

I lived my truest French salon dreams while I experienced the work of and chatted with these incredible artists throughout this lovely night. Isotalo started off the night and I immediately fell love with her very grounded voice and her fancy, silky robe (it was much like mine).

“I’m loving the living room circuit [because] it’s so DIY, grassroots, democratic and nurturing,” Isotalo said after she performed in my living room, “It expresses a Midwest grittiness to create spaces to incubate ourselves. It reflects a vibrant community of artists. “

She was feeling those good-good vibes; that made me feel like I was doing the salon queens of the past proud.

Up next was the  playwright who already has a name that makes him sound famous: David Mitchell Clauson. He was brilliant and charming, not to mention that he gave a spotlight to all those marginalized folx out there, so I am a fan. He translated A New System of Freedom, or, The Conspiracy Against Love by Charlotte von Stein and held a reading of it with various performers and attendees of Homeset. It was quick and funny. One character mentioned love being dead or nonexistent, so my nihilistic side was loving that (ironically speaking).

After Homeset, he expressed how he liked how free the audience could be in the space. I loved that aspect, too.

“I am always excited whenever people try to break the audience out of the 19th-century performance conventions that we’ve inherited,” Clauson said. “In terms of the politics of the performance space, I think it can be quite radical to try and liberate the audience from sitting in the dark, staying silent”.

I mentioned he was quick and smart, yes? Good.

“From Homeset, I learned that many of the most successful moments in the comedy actually derive from wordplay—from short comic maxims or one-liners,” Clauson said. “I think that I sometimes get caught up in the constantly-moving, complex action of the plot instead of trusting the playwright’s wit.”

I loved that this brilliant artist could learn and his work could grow through an experience—in my space. (Still about me, y’all. Duh.)

After everyone wiped their eyes from laughing so hard and got some cheese, we moved onto our next artist, Aaron Aptaker, the magician.

When Aptaker first arrived at my apartment earlier that night, he was rather low maintenance. I saw him go towards the fridge, so I asked, “What can I do for you, lovely?” I then caught a sight of a large purple package he was holding. He met my eyes and asked if he could move some things around in the fridge to make it fit.

“Oh” I said, “of course, darling!” I said to him, obviously still living my salon dream. We moved a vegetable soup my mom made me and made room for Aptaker’s mysterious purple package. I could not wait to see what the magician had up his sleeve (get it—it’s a joke about magicians having tricks up their sleeves).

Aptaker performed a trick in which he requested a dollar from an audience member. Audience member Jack volunteered very enthusiastically—he immediately threw his entire wallet at Aptaker. Despite the initial enthusiasm, the trick did not seem to go well. As a consolation prize, Aptakere offered the purple package to Jack for messing up the trick and losing his dollar. When Jack opened the various layers of the purple package, there was a bowl of Jell-O within it. (Now I understand why it was in the fridge.) Inside the Jell-O was Jack’s dollar.

Everyone’s jaws dropped as Jack frantically ran around the room, showing everyone the dollar. It had been slightly ripped when Aptaker fist started the trick, and when Jack lined up the pieces of the small and larger pieces of the dollar, they fit.

Woah. Wow. What? Crazy. I loved having Aptaker’s fun and magical energy fill my apartment with wonder and laughter.

Last up was Bowers, our mystical poet. She required a very intimate space, so we set it up in my room. Her piece, Arcana Obscura, was originally designed for one person. Bowers wanted a single, audience member to be free to “have a real, honest emotional reaction to the piece.”

However, due to time constraints, Bowers took in three to four people at a time to see what the cards had to say for them. Bowers is currently in residence with Homeset, so she has already performed Arcana Obscura in three different adaptations.

“I’m currently working to develop a version of Arcana Obscura that I can fit into a vintage suitcase and do anywhere, anytime, for anyone,” Bowers said.

She will be performing her piece at the upcoming Homesets as well; for this reason, the details of her piece remain a secret. I guess you’ll have to come check it out if you want to know more about the piece.  idea of taking art to the streets is so exciting and Cassie really brought our magical night to a close.

As people started to leave, they introduced themselves to me and thanked me for a night of art and theater.

“Oh, you must come back!” I said to everyone as I gave them many hugs.

“Anytime, lovely,” I said to some attendees, hinting that I was part of the theratrics too. (Again. It’s about me.)

I started cleaning up the apartment while the artists gathered their act supplies and slowly departed. They all thanked me; I thanked them back for sharing their work and themselves.

Curators Olivia Lilley and Serna left last. Serna later told me that she thought this Homeset went so well.

“Some folx came back and as they come back they make it a little easier for everyone else to feel comfortable in the space,” Serna said. “Because people were more comfortable, they felt like they could get up and move around, make friends and talk to artists they didn’t know.”

I am gonna say it was that, of course, but it was also my amazing hosting.

As I wiped down the kitchen island and moved the furniture back to its pre-salon setting, I felt all the energy of the night hit me. It was invigorating to know that these beautiful and brave artists are out in the world. I felt so lucky to have had the opportunity to open my home to them for exploration.

I started to feel tired, so I put on my lion onesie and crawled into bed, curious about what I would dream of that night, now that I had lived my French salon dream.