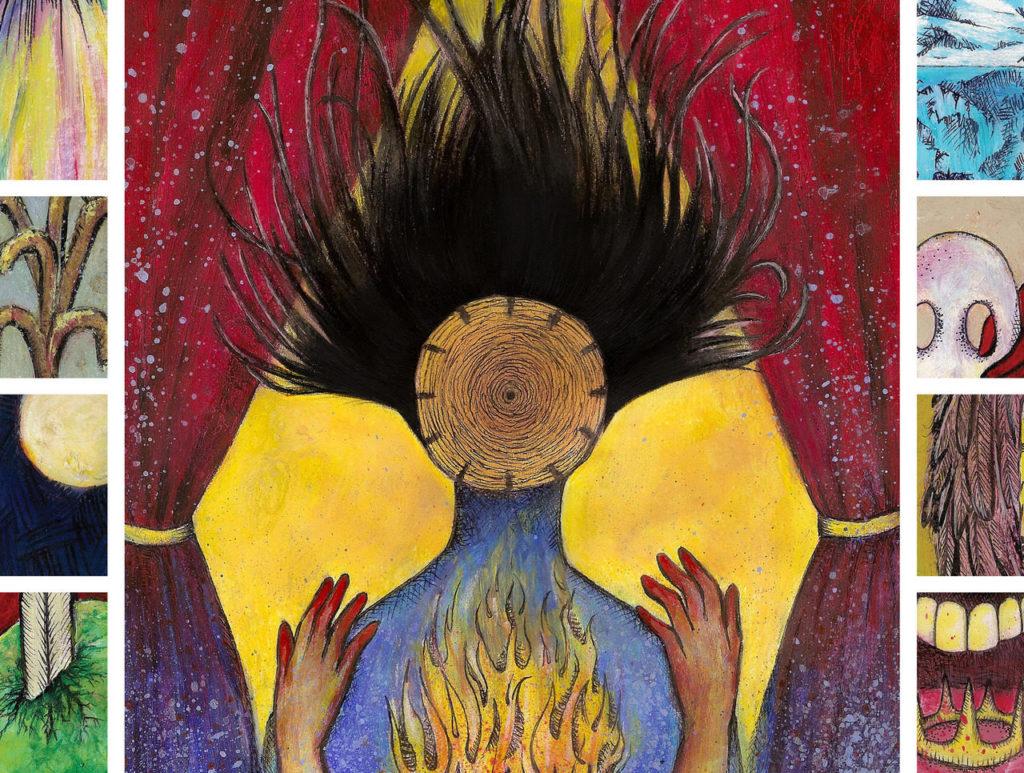 Last Thursday, at a youth music center in Logan Square, local singer-songwriter, visual artist and performer Nire Nah rapidly cycled through various handmade costumes: a lion’s mane of colorful worm-like threads, an amorphous gray blob of fabric engulfing her torso, a necklace of cobwebs and planetary orbs and – finally – a fur vest and leggings combo worthy of a Nordic hunter. All the while, Prop Thtr Artistic Director and Creative Director of Pop Magic Productions Olivia Lilley leaned in, squinting, to survey Nire’s shifting visage with the attention to detail of a watchmaker.

All of a sudden, and seemingly without communication, Lilley turned on a playlist. Nah snapped and strutted about the space, grappling with a microphone as if it were her wrestling partner. Lilley would rapidly change the song and Nah would, in turn, rapidly change the pace, tone and levels of her movement. Eventually, Lilley settled on a French punk song with a bit of a country-giddyup-hiccup, which set Nah into a bowlegged gate toward the grand piano. Those present waited to see how the saloon shootout would go down. Then the song ended, Nire stood up straight and the collaborators took a break.

The occasion was a rehearsal for Prop Thtr’s upcoming production of Nah’s album-release-show/theatrical-concert Coeur Age, which means both “Courage” and “Heart Age.” The process may sound like fun and games (and it is those things), but the overriding tone of the rehearsal room was one of focus, control and organization. This tone fits the blurb that Nah – a professed lover of self-help literature – wrote for the show: “Your mythical self-help guide! Story-songs, anthems, tantrums, lullabies & laments…” What is self-help if not the conscious and persistent organization of chaos?

This mindset of power and compartmentalizing is central to Nah’s body of work.

“My brain is continually overflowing with ideas,” Nah said, “And the most important work I do seems to be giving each idea a reasonable place to live, a context, where it can have the most impact and make the most sense. A lot of sorting and grouping goes on.”

Although the careful division of the sprawling body of work is about aesthetics and working strategies, it also alludes to a linear narrative. A loose biography of Nah and the progressions of her artistic and personal philosophies can be mapped onto her filing system.

“I approach Nire and her songs as if the album is the play,” Lilley said on directing Nah. “I think of her and who she is as our source material.”

The work in the Ice Cream Truck is something like Jackson Pollock meets emojis. The project came about during Nah’s art school days; she described the work as a rejection of her formal training and, for that matter, of the entire world outside of her dorm room.

“I identified as a complete outsider at that time,” Nah said “And it was important to me to create a world that was separate from (and superior to) the real world.”

After feeling that the work and lifestyle of the Ice Cream Truck was alienating her friends and leading to a “dead end,” Nah began to switch things up.

“I think the Nire Nah I am today began with the realization that I did want to live in the real world… and make work that might matter to others,” she said.

This concept channeled into “Cave Paintings,” a period during which Nah felt “primitive, like a cave-dweller… at least trying to face myself.” Then came “Creature of Habit,” a period defined by Nah’s insistence on building a healthy, consistent, and highly regimented art-making schedule. In the end, these various stages led Nah to her current focus on songwriting.

For Nah, songwriting offered something that her abstract and highly experimental visual work could not: clear, concise communication that cuts straight to the soul. Music makes Nah feel useful.

“If [it’s] relatable and moving enough, it may actually be of service to others who are going through what I’m going through,” Nah said.

In this light, it is easy to read the colorful, flamboyant and celebratory Coeur Age as the coming-out-party culmination of a Raskolnikovian or Stop Making Sense–ian narrative move from neurotic hermitage to loving community engagement. And in a way, that view would be correct.

“The best movies are the ones where the protagonist fully reverses their original outlook/behavior by the end of the movie,” Nah said, speaking towards the similarities between her songwriting process and the screenwriting process.

Many aspects of Coeur Age eschew this linearity and circle Nah’s trajectory back onto itself. With Lilley’s precise staging and Nah’s bold costumes, elements of Nah’s earlier visual work come to play. Moreover, the song-cycle that comprises the upcoming show and album debuted two years ago as a collection of demos released on soundcloud.

Several months ago, Nah enlisted Patrick Budde (a member of local folk-rock act Friends of the Bog and the recording engineer and multi-instrumentalist behind Preserve Records and the solo project Perfect Posture) to engineer and arrange a re-recording of the album. The timing of that collaboration happened to perfectly pair with Nah and Lilley’s stage collaboration.

“There’s a heightened drama and momentousness to dropping the album on the very same day that we put on this show…that features the same music…done completely differently,” Nah said. “It’s madness …but … I don’t care how hard it is to be reworking the same idea in different ways.”

It is for these reasons that Coeur Age is a phoenix story, a seance, a process of drumming up life in dead things and reinvigorating discarded objects by exploring them from new angles. This process is perhaps best exemplified by the show poster, which features a skeleton being freed from her skin as her ghost presents her with her own heart. This is death, rebirth and a beautiful and confusing mess of layers and ideas. At the end of the day, the poster, the show, the album and the body of work are all about learning to feel comfortable and whole in one’s own skin.

The winking mythologizing and filing is not about mystique and concealment. It is a means to fulfilment, openness, and even normalcy.

“If it’s not helping someone else, I don’t really want to do it,” Nire said, with a powerful sense of sincerity and drive.

Back in rehearsal, cycling through costumes, struts, and characters, Nire finally shed it all to reveal her blue jeans and t-shirt that read “NAH NAH NAH.” She presented herself proudly to no one in particular with a giant grin on her face.