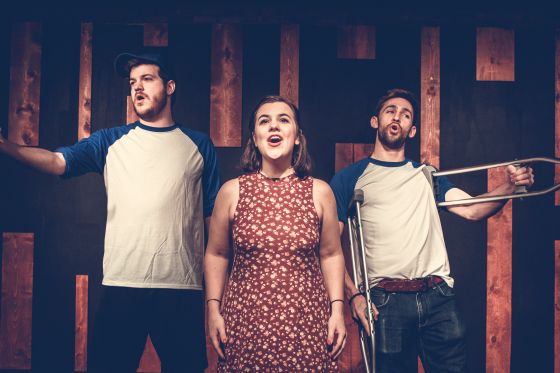 America’s Pastime: Striking Out Reimagines the World of Baseball

From left to right: Ryan Cashman, Laurel Zoff Pelton and Jordan Wilson in Striking Out: A Gay Baseball Musical at the Annoyance Theatre/Photo: Jeremy Kanne

When Glenn Burke signed with the Dodgers in 1976, the sports world wasn’t ready for an openly gay baseball player. Although Burke made no secret of his homosexuality, his managers tried to hush him up by offering him $75,000 to get married.

“I guess you mean to a woman,” Burke responded, laughing them off.

Burke is credited for inventing the high-five with teammate Dusty Baker. But his legacy as the first openly gay professional athlete was never acknowledged in his lifetime. After being released from his contract in 1980, Burke became addicted to cocaine, suffered homelessness and passed away from AIDS complications in 1995.

Almost 40 years after Burke’s career ended, professional sports have barely changed. Major League Baseball has yet to have a single openly gay player. And in other sports, gay athletes continue to make headlines simply for coming out. Though American culture at large has become more accepting of the LGBTQIA+ community, homophobia remains an ingrained attitude in the world of professional sports.

The seeds of an idea

When Michael Sam was drafted to the St. Louis Rams in 2014, he became the National Football League (NFL)’s first openly gay player. At the time, Adam Levin was working at a sports bar in Lakeview and watching hours of ESPN. He was struck by the network’s coverage of Sam’s sexual orientation.

“There was all this discussion about the locker room, and ‘would you have him on your team,’” Levin said. “I thought it was pretty offensive.”

Levin teamed up with Ryan Ford to write Striking Out: A Gay Baseball Musical, which imagines a world in which all professional baseball players are gay. Striking Out follows Jimmy Roberts, a talented straight athlete who hides his sexual orientation in order to play for the Chicago Otters.

The writers wanted to create a legitimate musical, so they studied up on the structure of classical musicals. Musicals produced at comedy theaters, such as the Annoyance Theatre, often parody the genre of musical theater. But Levin and Ford draw laughs through witty lyrics and clever choreography, instead of rolling their eyes at musical theater’s very existence.

“This is a sincere musical,” Levin said. “And you need to take it seriously.”

Levin compares Striking Out to both Damn Yankees, a modern retelling of the Faust story, and The Book of Mormon. Joe, the middle-aged protagonist of Damn Yankees, makes a deal with the devil to become a young baseball player. Elder Cunningham, one of the main characters in The Book of Mormon, invents stories instead of preaching Mormon doctrine. Both characters are ultimately trapped by their own lies.

“Anyone who is trying to hide their true selves can relate to each other a bit,” Levin said.

A world of difference

“He was athletic, he was clean-cut, he was masculine,” McGowan said. “He was everything we wanted to prove to the world we could be.”

In contrast, Striking Out celebrates femininity in gay men. One Otter wears a long, flowing wig to a club. Another Otter wields a large fan during a musical number about the husbands the team has left at home. In another scene, the ghost of Babe Ruth appears to council Jimmy in a moment of crisis. Played by drag queen Rence, Babe Ruth wears glitter instead of eye black and twirls a baseball bat like a baton. Striking Out forces the audience to imagine even the most lauded baseball legends as gay.

Striking Out also subverts gender norms. The plot is swept along by coverage on a sports show called Exposition, which is anchored by two women. As journalists, they are aggressive, asking hard-hitting questions and frequently talking over Jimmy during interviews.

“They’re playing with the idea of who can hold leadership roles,” Sarah Porter, who plays Jimmy’s agent Chester Weisel, said.

George Elrod, who plays Otter #1, is proud to be part of a campy, queer musical.

“I’m a pretty femme performer,” Elrod said. “Why would I minimize that in any capacity? Although I’m performing in the back, my personality comes forward.”

As LGBTQIA+ stories gain prominence in mainstream film, the distinction between “queer” art and gay stories has come under consideration. Writing for Slate, E. Alex Jung describes queer art as “radical in both content and form.” Queer art doesn’t traffic in normalization; it embraces difference, deviance and camp. Queer art is a far cry from gay stories like Love, Simon, which go to great lengths to assure straight audiences that gay characters are “just like them.”

Striking Out, for its part, straddles the line. The final number of the show is a love song between Jimmy and his girlfriend, Penny. Holding hands, they sing, “Love is love, and love is enough.” By appropriating the language of the marriage equality movement for a straight couple, Levin and Ford promote acceptance while also questioning the value of acceptance as an end-goal for queer liberation. Although Jimmy’s ultimate acceptance into the Otters is revolutionary within the world of the play, it’s a foregone conclusion to the audience. If the ending feels a bit predictable, it’s because tolerance is tame in comparison to the radical embrace of queer culture that’s possible.

What comedy can accomplish

“You can get ideas across to people when they’re laughing more than you can when you’re yelling,” he said. “It’s like [how horror] is getting away with commentary because it’s genre.”

Ryan Cashman, who plays Jimmy, stresses the importance of punching up in comedy. Comedians have a moral obligation to speak truth to power, instead of making fun of people who are oppressed.

“If you’re laughing, if you’re having a good time, it’s because you’re realizing how the hegemonic world looks through its own telescope,” Cashman said.

Indeed, the audience at Striking Out was laughing because the show examined the hegemony of heterosexuality through the lens of baseball.

“Since baseball is America’s pastime, you can paint a picture of what America looks like, and what it has become, and how we can mold it into something better,” Cashman said.

Striking Out plays every Saturday night at 8 PM at the Annoyance Theatre & Bar at 851 West Belmont Avenue until June 16. For more information, visit theannoyance.com, or follow the show on Instagram at @strikingoutmusical.