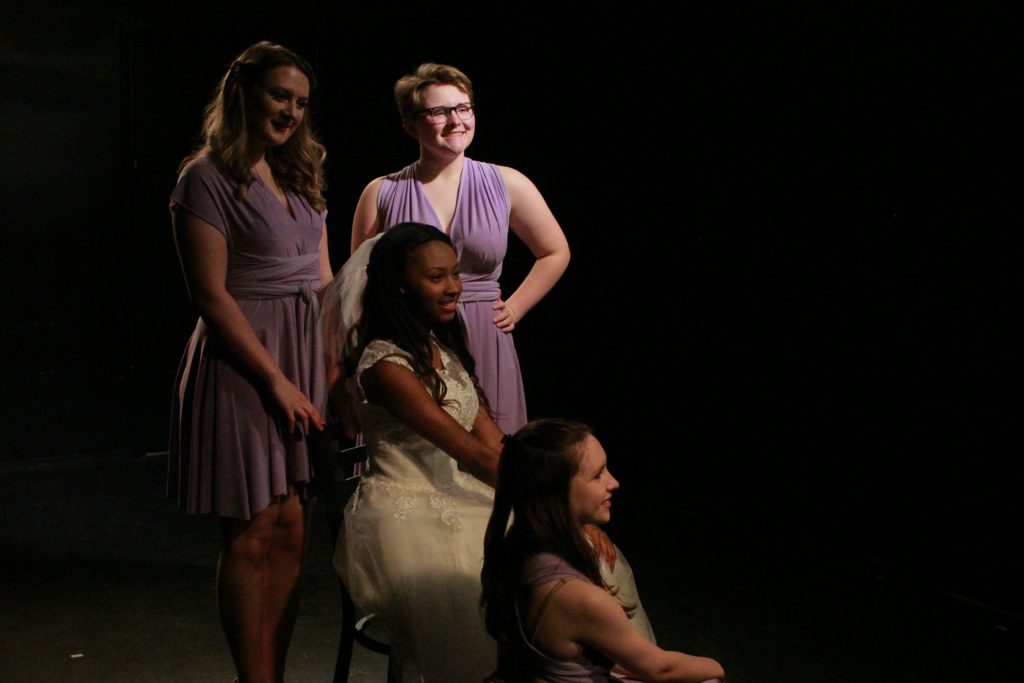 Engaging Youth: Theatre Above the Law Puts Mentorship Above the Rest

Tony Lawry, founder of Theatre Above the Law (ATL), does not make a fortune running his Rogers Park theater company. He makes opportunity instead. Opportunity for the local students to find their voice in the art form he has dedicated his life to.

“I don’t enjoy working for little or free, but I enjoy giving the kids the opportunity they wouldn’t normally have,” Lawry said.

That opportunity comes in the form of an after-school program. Twice a week for 90 minutes, Lawry gathers with a group of students at the Chicago Math and Science Academy.

For those 90 minutes, the students are given the chance to expand their artistic horizons as part of ATL’s after-school theater program. The program runs roughly from October to May. The program has only been part of one school so far, but its scheduling structure can be accommodated to the needs of any school.

Lawry said the first semester is spent largely on “interpersonal communication aspects” between the middle and high school students through improvisation and gameplay. This is a time for students of different ages to work together, which is particularly interesting if the students are siblings.

One unique obstacle of the first school semester is to break students out of habits derived from a technologically developed childhood.

“A lot of these kids don’t know how to have eye contact with someone,” Lawry explained. “They’re always on their phone so that’s very uncomfortable for them. We try to meet those challenges in the first semester.”

By the second semester, the students are equipped with the performance tools to write their own show.

Per ATL’s mission, the show must cater to their audience. In this case, the students are writing to their peers. At the end of the second semester, they perform their show three times: once at the middle school, once at the high school and finally, at ATL’s theater space at the McKaw Theater.

Last year, the after-school program created a 45-minute play they titled Da Switch Up, in which a student and a teacher switch places à la Freaky Friday.

This year, Lawry’s sponsor teacher was due to fly out to teach in Uganda at the beginning of May, which shortened the after-school program’s timeline. So instead of one long play, the students created a six-part sketch comedy show, with a butterfly effect twist following the final part.

“They’re told no all day long,” he continued. “That’s what theater gives them—the acceptance to do and be what you desire to do and be. They don’t get that in a regimented school day.”

A knack for educational programming

Lawry is no newcomer to the after-school program scene. He spent five years working with American Theatre Company’s program, four years in Piccolo’s education department and several more years in a handful of other programs between Evanston, North Chicago and South Chicago.

after-school programming is “ingrained in my calendar,” Lawry joked.

Unlike many other after-school programs, ATL doesn’t burden students and their families with the bill.

Lawry said asking parents to pay for these kinds of classes or programs leaves him with a bad taste in his mouth, especially if this is the only chance the students have to practice theater.

Right now, in an effort to keep his program prices low, Lawry is running it on his own.

“If the funding came through and we could do all those things for free I’d much prefer that,” he said. “Free for parents and kids. Then I could pay more teaching artists and pay them more.

“…Sadly with ATC not being around anymore that opens up a lot of after-school programs that aren’t there,” he added.

With gaps in affordable, performance-based, after-school programming, Lawry wants to extend his program beyond the walls of CMSA. At its current level, however, three schools is probably the maximum number of participants.

Having the students perform at the McKaw Theater is important to Lawry because it gives the kids a chance to act in a real theater which might be a first for them.

Students are often encouraged to audition for ATL’s mainstage shows, as well, which affords them more opportunities to perform in the McKaw Theater and get paid for their time.

As part of the mission to encourage the work of young performers, ATL employs young actors for their shows. If a show doesn’t call for young performers, Lawry will create a separate youth ensemble cast in order to include young people. For Ladies in Waiting, which had a cast of four women and a man, Lawry employed four young actresses and a young actor who performed the Saturday matinees.

Arranging the after-school program costs about $1200 on the lowest end.

“If it was $3000, I could give a nice stipend to the teaching artist, but have money available for a school who can’t get $3000 or to facilitate the props or costumes or whatever,” Lawry explained.

Extra funds could also go toward things like notebooks, pens and set materials.

As they endeavor on their third season this upcoming fall, Lawry wants to pursue 501C3 status for his theater company.

Lawry hopes that someday ATL will be able to offer free, off-site summer programming for local students. Until then working with young performers is still at the forefront of the company’s mind.

He hopes to one day offer free, off-site, summer programming for local students. Until then, however, working with young performers is still on the forefront of the company’s mind.

“We mentor the future of theater,” he said.

With after-school programming starting up in many schools around Chicago, any schools or educators interested in Theatre Above the Law’s after-school programming should reach out to Tony Lawry at tlawry7@gmail.com. Theatre Above the Law will embark on its third season in October with Poe. More information about their company and ways to donate or help can be found at theatreatl.org.