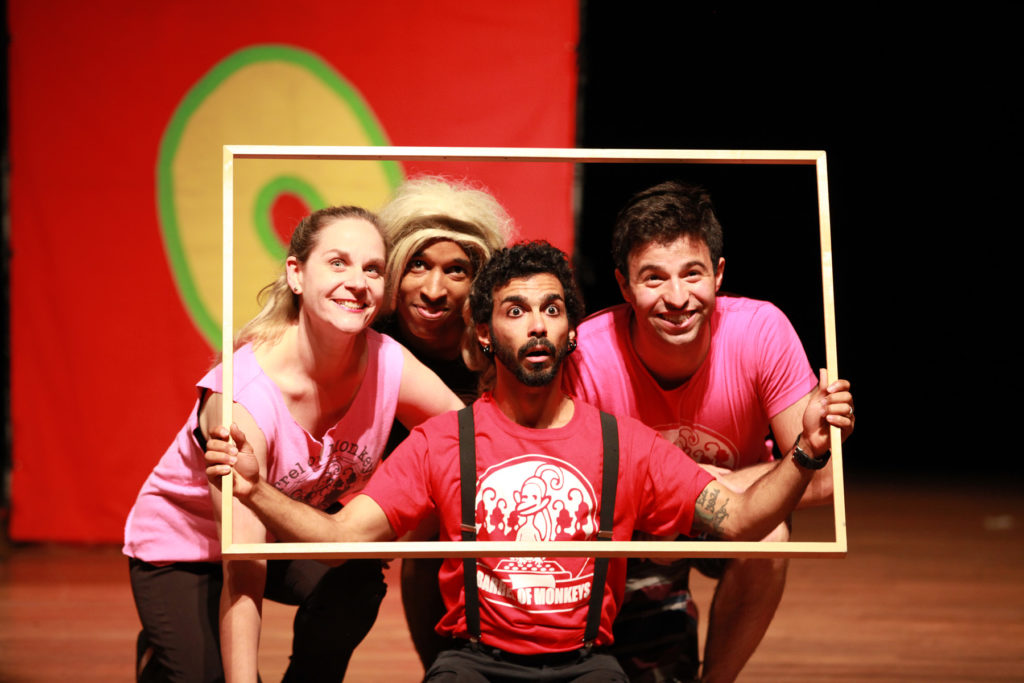 Elements of Surprise: Barrel of Monkeys produces CELEBRATION OF AUTHORS

The June 7 rehearsal for Barrel of Monkeys’ upcoming CELEBRATION OF AUTHORS initially looked more like a family reunion party than work. Approximately thirty joyous twenty-somethings laughed, snacked, sang and floated from group to group as golden, evening sunlight poured through the windows of the Loyola Park headquarters building. When the ever-playful and indefatigable Artistic Director Brandon Cloyd leaped to the center of the room, those assembled began to organize scripts and instruments as they wordlessly gathered in a large circle. After some opening remarks and raucous warm-up games, the artists began to communally lead themselves through rehearsal as seamlessly as organelles of a eukaryote. Although Cloyd is directing the show, the level of trust and collaboration is so strong that it would be difficult for an outsider to pinpoint a leader or sense of hierarchy in the room.

This sense of teamwork, democracy and simultaneous fun-loving zaniness and earnest diligence is always at play when it comes to Barrel of Monkeys.

“You jump into this group of people, and there’s this culture, and you pick up on it and buy into it – we call it drinking the Kool-Aid,” Cloyd joked, referencing his company’s work ethic and reverence for their material.

For the uninitiated, Barrel of Monkeys is a troupe of educator-artists who have worked with over sixty schools in the Chicagoland area. Founded in 1997, they go into classrooms and teach students the basics of storytelling. Once the foundation has been set, they work on writing fictional stories, true stories, stories relying on figurative language and stories relying on persuasive arguments. Then, the teachers—who double as the Barrel of Monkeys actors—adapt the work of their students for the stage, a process that eventually culminates in variety-show-like performances.

“It’s a challenge,” Cloyd explained with infectious enthusiasm radiating from his mustachioed grin. “The actors have to think, ‘Okay, we’re doing about twenty stories a show, how do we make each one of them different?’ So, we gravitate toward different styles of theater, different styles of performing in general… Dance pieces, clown routines, musical theater numbers, that aesthetic of… Some absurdist type of play.”

These frenetic and celebratory shows take place at the schools that host the Barrel of Monkeys writing workshops, and they are presented to the general public on Monday nights at the Neo-Futurists’ Theater under the title That’s Weird, Grandma. CELEBRATION OF AUTHORS, though, is perhaps Barrel of Monkey’s annual crowning achievement: a public performance at the Logan Center for the Arts that presents the biggest, boldest, and—this year—most political work generated at each school that the company worked with that year.

This year, students wrote about a wide variety of hot-button topics. One Barrel of Monkeys story features a princess-artist who is perfectly happy living alone and painting rather than tying herself down by marrying a prince. Another story focuses on a mother who accepts her son for who he is once he reveals that he has a crush on a boy and not a girl. In a step toward a true reflection of our communities, several students wrote their Barrel of Monkeys stories in Spanish, a choice which the performers are honoring in performance. In recent weeks, one student went so far as to tackle the public downfall of Kanye West by writing a bittersweet dialogue between Kanye and Jay-Z.

“They’re so incredibly aware of the world around them,” Cloyd said, spreading the Barrel of Monkeys gospel. “Where other adults say no, we say yes… We want [the student writers] to trust in their ideas and just go with them… and that’s where those elements of surprise come from.”

It is this level of awareness and this element of surprise that keep CELEBRATION OF AUTHORS—along with the rest of the Barrel of Monkeys repertoire—from falling into the category of children’s theater. The politics of the work is in the form as well as the content, and adult theatergoers may find the show to be as instructional as it is delightful.

“Children really see things,” The Chicago-born painter John Michael Carter once said. “Like the details of a tree. And then, they are taught the symbols for things, like the classic cartoon of a tree. Art is about getting back to seeing the real tree.”

Or, as experimental theater director and theorist Richard Foreman put it in his book Unbalancing Acts:

“Passing through each of us is a continual flow of [complex feelings] we are taught to [call] ‘hunger,’ ‘lust,’ ‘aversion,’ ‘attraction’ [etc.]. But these labels are neither truthful nor accurate; condensing our wide field of impulses into a few nameable categories suppresses our awareness of the infinity of tones and feeling gradations that are part of the original impulse.”

All of this is said a bit more succinctly in Joyce Kilmer’s class, Trees. And, the crux of the issue is expressed best by Wordsworth: “The Child is father of the Man.”

Knowingly or not, Barrel of Monkeys has taken these concepts to heart and reaps the benefit of having access to creative minds unburdened by symbols and the restrictions of extensive knowledge of popular narrative forms. Coincidentally, the tree-symbol Carter mentioned is at the center of Chicago’s current “Earth Explorers” / “Rahm’s Readers” summer reading initiative. While such a program is assuredly a good influence on the community, the use of the tree-symbol is ironic. Whereas consuming the arts and learning systems of communication is vital for our youth, it is one side of a coin that must be balanced. For every little earth-explorer can also be a world-builder, and that is where Barrel of Monkeys comes in.

It is this untarnished view, this lack of self-censorship and this chance for students to present their community with the world as they see it (with eyes wide and clear) and an embodied vision of the world as they wish it to be. It is all about shedding inhibitions, sharing, and “unbalancing.”

“All of the philosophies we use in the classroom seep into the rehearsal room, too,” Cloyd explained.

This accounts for the open, democratic style of the rehearsal room work ethic and the artists’ total embracing of their students’ wackiest images and narrative turns.

“Sometimes you end up producing old dead people’s plays, but when we have the authors in the room, and we know them, there’s an extra bit of sensitivity,” Cloyd added, reflecting on the company’s sense of duty. “Because not only are [the students] the author, they also become the audience.”

And, sitting in the dark of the Logan Center for the Arts this Tuesday, these students will have the honor of seeing their own worlds come to life. Those community members of all ages who come to celebrate their voices and these worlds may get the added benefit of waking up and seeing—if just for the duration of the show—the real tree.

CELEBRATION OF AUTHORS will occur Tuesday, June 12 at The Logan Center at 915 E 60th Street. The performance is free. For reservations, please visit barrelofmonkeys.org/coa or call (773) 506-7140. Note: tickets are limited and available on a first come, first served basis.