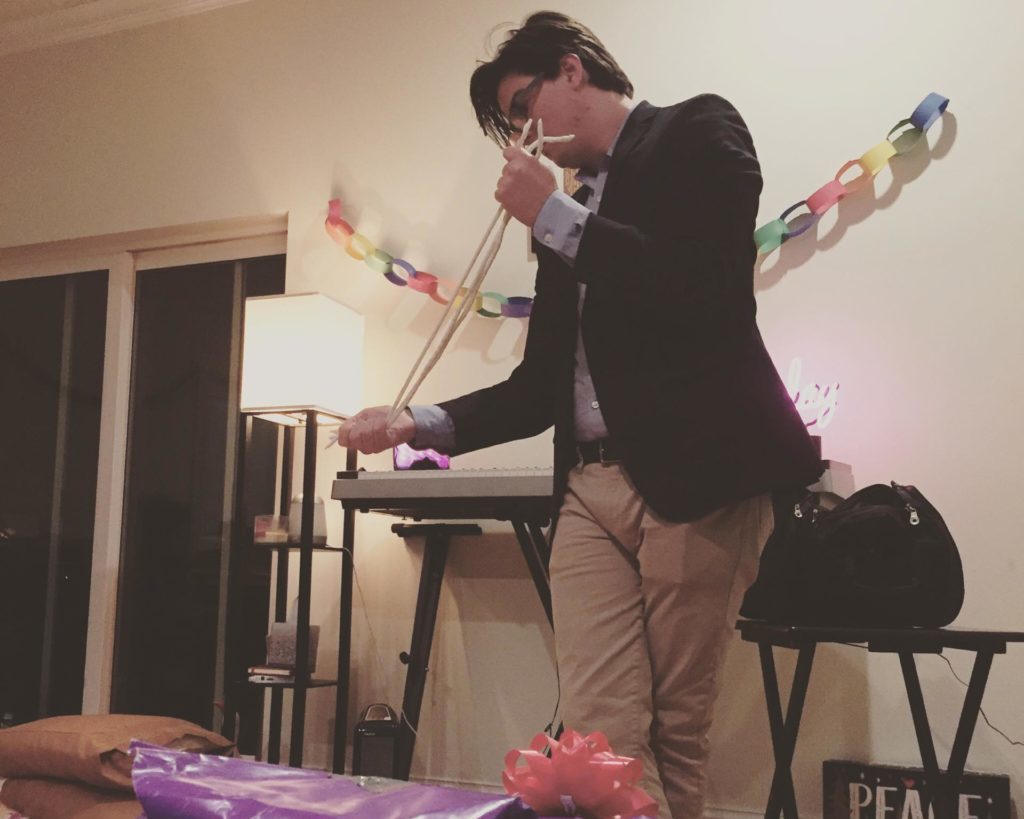 He Surprises, He Devises, He Handles Millennial Crisis: Keeping Up with Aaron Aptaker

Magicians: they have jobs! They take breaks! They’re just like us! Multidisciplinary artist Aaron Aptaker has recently been on hiatus. I sat down with him to find out how his different artistic passions influence one another, and what he’s looking forward to as he gears up to re-enter the theater-making world.

Thanks so much for sitting down with me, Aaron! You engage in many disciplines. What are you working on now?

Aptaker: I’ve been doing magic since I was a kid. I went to school for theater directing. Then I was freelance for a while after college – bootstrap stuff. I hit a wall a couple of years ago where I wasn’t happy as a person and so I decided that I really needed to focus on finding a kind of holistic happiness.

And how are you going about finding that holistic happiness?

Aptaker: Well, focusing on any kind of career goal was not making me happy. Pure aspiration isn’t the single most important thing, I realized. My source of unhappiness was that I was neglecting some essential life functions: financing, health insurance, having a social life. For me, doing shows has always been satisfying artistically but you have to pay everyone, and that’s super important, and that’s always the hard part.

I think a lot of us can relate to the neglecting-life-stuff while you’re pursuing your passion. I certainly can!

Aptaker: Yeah, totally. But this is the year to reenter art making for me! I’m a multidisciplinary dude who’s been in limbo, but I’m excited and ready to get back into it.

So you’ve got your magic background, and you’re a director… What else informs your interdisciplinary dudeness?

Aptaker: I’ve written some musicals—I wrote and directed Vincent the Musical at DePaul. It was a totally made up Jesus-meets-Tarzan story where St. Vincent was raised by wolves. It’s a birthday tradition there now—they perform it every year on St. Vincent’s birthday.

I also did a musical called How to Run for Mayor, and that was part of The Chicago Music Theater Festival in 2015.

I also do film composition and scoring. I do that freelance, and I get gigs by word of mouth.

So music too! How do your magic, directing, musical writing and composing efforts compare to each other? How do they intersect?

Aptaker: Film composition is so different—it can be very refreshing compared to directing, which I love but can be exhausting. When you’re composing for a film, your job is to achieve the director’s vision. And I’ve found that it’s very freeing to not be 100% creatively responsible for a project. I like working from a prompt, and I love getting the chance to truly work collaboratively.

With writing musicals, you’re working backward. A song or funny line usually comes to me first. You start with a funny idea that comes to you and if it interests you, you lean into it and find out why it excites you.

With film composition, the filmmaker already has that thing that excited them in the first place. You’re taking someone else’s idea and running with it, rather than building an entire world from the ground up. As the composer, you get to be in a collaborative and supportive roll.

As a magician, do you DIY your own tricks?

Aptaker: Yes, absolutely, but the nitty-gritty of it is that there are a finite number of trick mechanisms. They basically boil down to appearing/disappearing, floating, mentalism, or transformation. But then the trick that you invent, even though it technically falls under one of those categories, is pure theater. When I’m creating a trick, I ask myself, what am I excited about? Then I find a trick that is in service of that, and build everything around it.

My most recent magic performance was at Homeset. I wanted to create the sensation of Deja Vu because it’s such a magical feeling. So my thought process was, how do I frame this for an audience? What tricks can I use to create this sensation? It’s like writing a musical—I worked backward from this idea of Deja Vu that excited me in the first place.

What made the sensation of Deja Vu so exciting to you?

It sounds like in your magic performances, you’re creating a world around that original exciting idea too. Does it parallel with directing?

Aptaker: With any play I’ve worked on, how to create surprises for the audience member is at the center for me as a theater maker. Both mediums are about guiding attention. And I think there’s a big difference between redirecting attention and just distracting. The plays that excite me most are the ones that are happily going in one direction, and then get a curveball. So then as you’re watching, your first impression is subverted and it reveals a new truth. As a director, I do what I can to get the audience to buy into the first truth before revealing the second. And with magic, it’s a very similar thing. It’s all about subverting expectation.

We all have our ideologies as people, our ways of encountering the world. And I think that most of us carry this mistaken belief that everyone experiences the world that way that we do. When you subvert expectations, you are asking people to reckon with the fact that their worldview is not objectively true. Our worldviews are entirely based on our intersectional identities and lived experiences. We have conscious and unconscious biases and filters.

The best magic tricks and the best plays make me reevaluate what I saw in the world for the past two hours (or however long the show was). I want people to leave with more uncertainty than they had before. That’s how I want to feel when I leave a show as an audience member. I want a little uncertainty, a little self-doubt—the good kind. The kind that makes me perceive my world in a different way than before.

A lot of what you do – directing, composing, writing – is behind the scenes. Do you see more magic performance in your future?

Aptaker: I love magic and I definitely want to keep working on material, but I would want to find another magician to perform it. I love that collaboration with the audience that you get from performing magic, but it’s the creative genesis that’s most exciting for me.

Aaron Aptaker is a director, writer, composer and magician based in Chicago. He currently serves as the Audience Experience Coordinator at Steppenwolf Theatre.