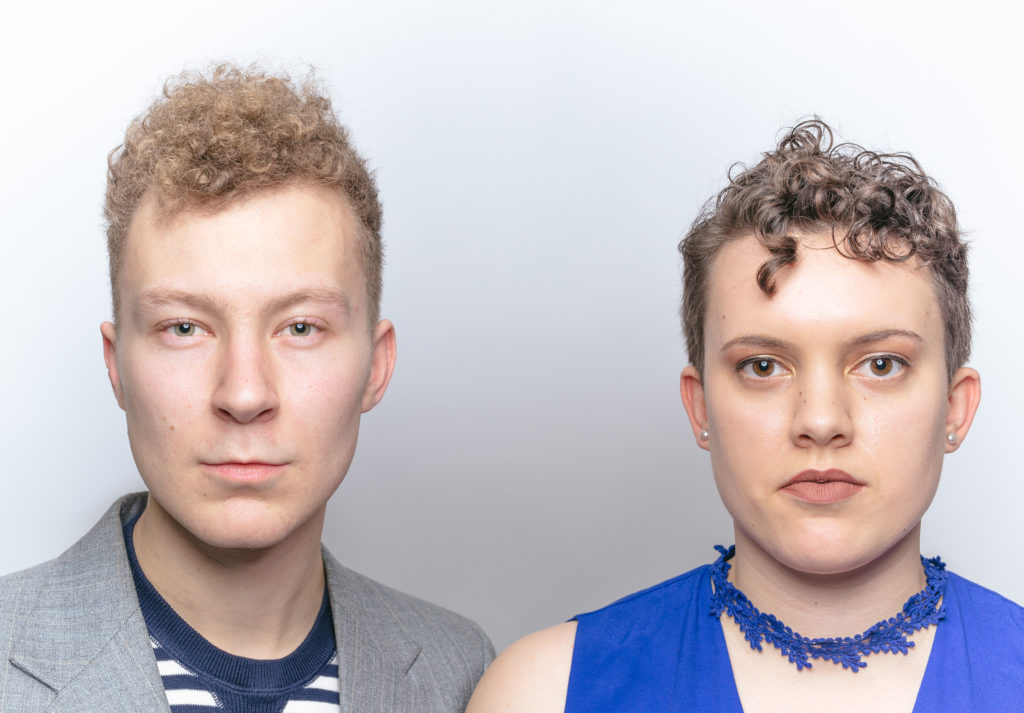 Being Visible: An Interview with Kiefer Otto and Courtney Robinson

Pictured above: Kiefer Otto and Courtney Robinson (Odea) are on a mission to be a platform for storytelling through song and dance for the LGBTQIA+ community/Photo: Orel Chollette

When Kiefer Otto and Courtney Robinson met four years ago at Columbia College Chicago, the two were immediately impressed with one another’s talents.

Otto has been dancing since he was four or five years old and will graduate with a degree in dance and a minor in music in December 2018. While Robinson, stage name Odea, studied music to fulfill her passion of singing and songwriting.

“I started songwriting when I was 15 or so,” Robinson said. “That became my biggest passion. I’m a singer but I’m more so like to er on the side of songwriting.”

Now, the two friends are teaming up for Queer Visibility in a Straight World, a performance showcase of roughly 10 stories, highlighting both Otto’s dance as well as Robinson’s songwriting set to debut summer 2019. The performances will be built on stories from the LGTBQIA+ community.

“We were planning on working on a smaller show and I said ‘what is important’ and she said she was struggling with queer visibility in a straight world,” Otto said. “So we started off with one of her stories and her queerness and visibility and through it all we were like ‘wow this feels important to us and to other people.’ We needed to make this a bigger show.”

Tyler Choate, a speech-language pathologist and Otto’s partner, was asked to join in helping the duo collect stories in an effort to help bring storytellers into the project and be as objective as possible, Otto said.

“We wanted a way to separate ourselves from the storytellers,” Otto added. “We wanted to have a third party go out and find them and then we’d come together and listen to the stories altogether.”

You’re in the very early phases of this project. What are you doing right now?

Robinson: Our first stories were mine and [Otto]’s which I’m excited about. We also met with a third storyteller and I recently finished a song for that person. It’s really focused on songwriting recently. It’s been a really cool experience because telling my own story is one thing, but to take other people’s words and turn it into a work of art is super cool.

Otto: She’s sent all the songs so far and walked me through the process on how she wrote it. At the moment I’ve listened to the songs and journaled my initial thoughts.

So maybe a year from now you’ll be doing the show?

Robinson: Next summer. It’ll take a lot of choreographing, writing, rehearsing and we’ll need money. We wanted to make sure we had enough time.

What specifically is the money going to? Paying yourselves, your performers?

Robinson: None of it will be for paying ourselves.

It will go towards paying our dancers and musicians for both rehearsal time and performance and the rehearsal space, the performance space, odds and ends like programs or last minute stuff — all that fun stuff that goes into making shows.

Otto: We thought it was important to pay for both rehearsal and performance time.

I’d rather be paid for rehearsal time than performance time. It’s important as a struggling artist that we pay our dancers for the time that they’re doing things.

Robinson: I definitely have to pay my musicians. I want to support people.

I also want to get as many queer musicians involved as possible. Reach out to the community to see how many musicians are available. It’s hard to find work as a musician, but queer musicians are often overlooked so it’s important to me to give them an opportunity to work.

This project is a lot of work—that’s probably an understatement—so why take on something like this on your own?

Otto: I think for me specifically I want to do it right now because since I’ve been in Chicago i’ve been putting out work and I want to make that next step to something bigger.

And with what is going on in the world and with discrimination against the LGBTQIA+ community it’s time. It’s time to do this right now [and] hear these stories whether they are happy or sad.

Robinson: I’m not the type of person who likes to wait for stuff to happen. I think it’s important for me to take control of it and if it needs to be done then to do it. Even if it’s expensive or hard or time-consuming.

Are you hoping this will not just be a one-time thing or that this might be a series?

Robinson:  We don’t know. But I have a feeling if we can pull this off we won’t want to stop after that. There are unlimited queer stories in the world so there is a lot more to do.

Otto: At the moment, first things first, let’s do this show and then see how that goes and then hopefully something bigger.

What kinds of stories are you looking for specifically?

Robinson: We want to hear it all… [But] we want to hear happiness too. Queer people have happy lives too! We want to showcase that part of it and the sad stuff, the hard stuff and the stuff they succeed at and feel good about.

Otto: Like when a trans person transitions or someone gets their first boyfriend or girlfriend. I don’t want to give off the impression that queer people only struggle. We definitely struggle.

But there is a lot to celebrate, too.

So it’s real—in everything that real means.

Otto: Yeah! So in our interviews, we aren’t guiding the stories we want them to tell us what they want to tell us. Tell us what we should know.

Robinson: Whatever they feel is important.

Otto:  We don’t want to make assumptions about their life and steer the story into how we want it to go.

Robinson: We don’t want to be part of it. It’s not about us. We really want to take ourselves out of it. That’s important for me in songwriting because I don’t want to put myself in at all.

It’s about uplifting the other people. I don’t have the same experiences as those people so it wouldn’t be fair.

Whether this is a one-time thing or it happens forever, what should the community take away from this?

Robinson: What I believe is cool about this is we have the opportunity to share the stories we’re telling to queer people, but showcase it with people who may not be as familiar with the queer community. It gives them a chance to be exposed to something that may have previously made them uncomfortable.

I want to be visible in front of everyone.

Otto: For the LGBTQIA+ community I like to see that we have this community, but we are all very different. In the world we live in at the moment there are things in the community that tear us apart.

I’d like our community to be unified and stand together no matter the differences.

…I want the community at large to see that. To see that we can be ourselves. We don’t need to judge each other. We can stand by each other even if straight people don’t struggle in the same ways as the LGBTQIA+ community.

Robinson: I would like to add that by unifying the community means not discounting experiences. It’s important for us to be a unified community but it’s important to know that not everyone struggles in the same way.

There are a lot of intersections in the LGBTQIA+ community itself. Unifying everyone doesn’t mean we’re all equal. We fight against racism and sexism in the community itself. It’s important to address and discuss that, as well.

Queer Visibility in a Straight World is actively fundraising for their 2019 performance and looking for more stories for their show. To donate, reach out or to find more information, visit queervisibility.net.