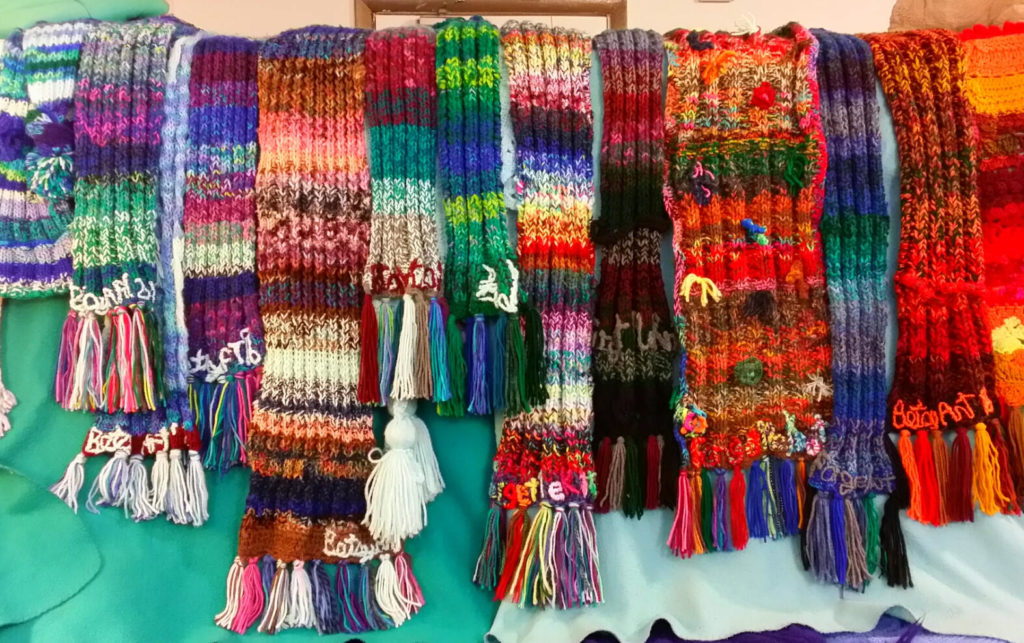 Pictured above: The finished scarves that were made for the ensemble members of (the)forget_me\knot/Photo: Dr. Betsy DeCourcy-Wernette

Denise Yvette Serna, a theater practitioner and arts activist based in Chicago, was inspired to create (the)forget_me\knot after she spent a year as a middle school teacher in South Texas.

“I was stricken by the fact that whenever a fight broke out among students—even when they got bloody—the other students would film the fight,” Serna said. “They wouldn’t help or call for help. They would film it. Afterward, the phones would be rounded up and the footage deleted,” I grew a fascination on how people can be detached from the world with a single screen that holds many social media apps.”

Chingada in early August 2014- when she moved back to Chicago summer of 2015. Serna started gathering materials for the piece around the spring of 2015 while she was still in Texas. Around the fall that same year, the earliest work was in development; the team started brainstorming sessions with individual artists to devise their tracks.

Serna and Strebig brainstormed ideas about connection, memory and how we are so desperate to be remembered by leaving a mark.

“As humans, we have a desperate need for our memories and fear they may be forgotten,” Serna explained. “That’s why we post everything on Facebook and Instagram to show we are still here. I wanted to create meaningless moments from old photographs and construct something that would last forever through our lenses.”

They started with the rehearsal process in January 2016. They used Catalyst Ranch for rehearsals and performances. But like most DIY theaters, the ensemble rehearsed in people’s living rooms and kitchens.

During the rehearsal process, the ensemble members came together to create pieces looking through lenses of the camera that took the pictures. They focused on the imaginative results distance lenses allow and how these lenses affect the way of life.

Serna revealed that the source material the artists used in the project spanned from news articles, first person experiences, devised movement, scripts and a giant box of very old photos someone found in their grandma’s attic. The final result produced a hypnotic experience that combined multi-disciplinary vignettes, all while using social media, unique pieces of art generated by and with the audience and the living nature of the space.

inappropriate theatre company and Serna collaborated with Catalyst Ranch’s event spaces to make an accessible and multidisciplinary stage. She found ways to blend art, music and spoken word, and created an avenue into the show. Serna wanted to use that method so artists could network with other artists. She invited the artists to come to the show and create art while they were in the audience, then possibly sell that art after curtain fell.

Serna and Dr. Betsy DeCourcy-Wernette met through DeCourcy-Wernette’s son, James Romney, who was a performer in Serna’s project. After this project was completed, DeCourcy-Wernette knitted scarves for the ensemble members using some of the sparkly yarn that was collected at the end of each production, after the actors would wrap the stage with the colorful yarn in the closing number.

Serna described one point of the show where actors would run around the stage and hand the piece of yarn to an audience member. One line that was repeated again and again: “Let go if it hurts.”

“The meaning of the line was that the yarn was connected to thirty other people,” Serna said. “But deep down was the question if we are really killing ourselves for this deep need for connection for other people.”

In the spirit of the local artists who came to the production and created their own art, DeCourcy-Wernette knitted the scarves as another form of memory that did not make use of social media or photos.

It took about eight hours for DeCourcy-Wernette to make each scarf and around four hours to make all the tassels. The yarn that was used to make Serna’s and Romney’s scarves was 100% from the play. As for the other scarves, DeCourcy eventually had to get other yarn to finish them, but was still to able use the sparkly yarn from the project and created tassels from other colorful yarn used in the show. DeCourcy-Wernette wanted to make it a surprise, and Serna absolutely adored it.

The yarn was so big that the ensemble used it in a brainstorming process. Each ensemble memble gathered their families’ old photographs and posted it on the wall in the rehearsal area. The yarn was connected to candy wrappers, post it notes and other photos stuck on the wall. With the yarn, they were able to find the “crust and filling for their pie,” as Serna said, to devise the show.

One of the ways the ensemble marketed (the)forget_me\knot was using the photos that personally belonged to their family. The ensemble put labels of the show on the back of the photo and handed it out to people. By doing that, the team was able to give the old photo a new story.

Serna will direct Richard & Jane & Dick & Sally at the Carnaval 2018: ConeXion!, a festival that celebrates Latinx talent in the theater community, from July 19 through July 21. More information can found at facebook.com/events/169201823746516.

Published in All, Theater and Underground