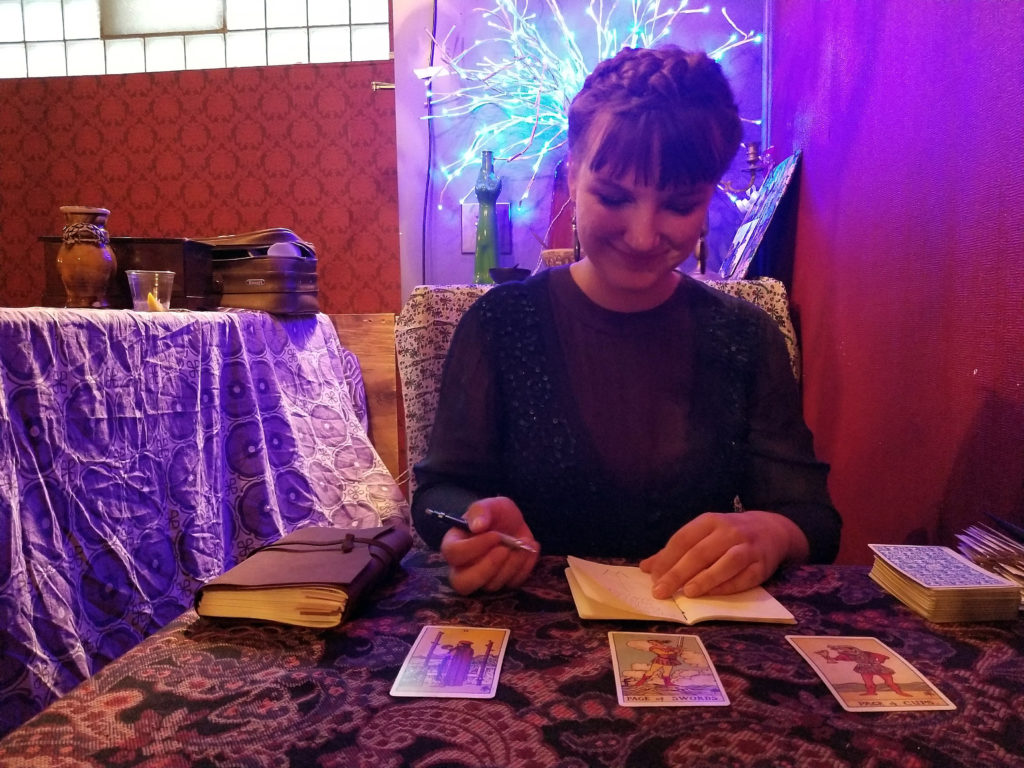 What’s in the Cards: An Interview with Performance Artist Cassie Bowers

Tell me about Arcana Obscura.

Bowers: Arcana Obscura is a piece of theater based on tarot readings. I started it about 2 years ago, with a friend of mine, Hannah Fisher. We developed the piece over the course of about a year. The first time we performed it was in my apartment and we invited a bunch of people, mostly friends, and a few others who were interested. And we decided to really pursue it because we both wanted to have a project that was just for us. We were driven by what we were excited about.

So we decided to work on this piece together—[Fisher] is also a writer, and I’m a designer and visual artist. We’d started doing tarot together while we were still in college. And creating a performance around on tarot was really appealing to us.

There’s this idea of theater as church. It’s something that a lot of theater artists talk about, especially lately. You come together as people, as a community, and you have a cathartic, spiritual experience. And we wanted to take that to an extreme. We wanted to create a kind of church-like spiritual experience through theatrical performance. So really focusing on an actual connection with the audience was a big factor. That’s why we chose to do one on one performances. And creating an atmosphere for that sort of catharsis and recognition that’s talked about in the theater, but in a much more direct and intimate way.

That’s really fascinating. Can you tell me more about what you mean by “recognition in theater?”

Bowers: From theater theory classes, something that always resonated with me is this idea of a lot the things one of the purposes of theater is that moment of recognition—recognizing yourself on the stage, realizing how this relates to me, I understand this character or I understand myself better because of this. When I do tarot, I’m bringing up a lot of archetypal images, and these ideas that exist in a universal way, in the human condition. So in some ways, I’m just there to help you on your own story. We talk about how the cards relate to you directly. It’s different from traditional theater, where, in a somewhat roundabout way, you’re hopefully recognizing yourself in the people onstage. It’s more direct. We’re just talking about you.

Tell me about the intersection of performance, tarot, and occultism. To be honest, I’m not sure I fully understand what “occultism” is. I grew up in bible country, where people used the term synonymously with anything remotely devil-related or satanic.

Bowers: Occultism covers a lot of ground. Occultism is—and I don’t want to misspeak—but from what I’ve learned, it’s essentially mysticism that’s specific to “Western” cultures and religions. So occultism doesn’t refer to any particular religion, but it’s the mystic counterparts of Christianity, Judaism, and others. Kabbalah falls into the “occultism” category; astrology falls into it. And of course, tarot.

What’s been most interesting for me, and where I’ve been focusing my research on as I continue to expand the show, is what themes found in occultism are universal across cultures. I’ve been doing a lot of research into various forms of mysticism and occultism and exploring how to synthesize them. But I’m really trying to stay away from any specificity. I’m interested in where all this mysticism overlaps, what is universal, what shows up everywhere.

Lately, I’ve looked more at the ancient Germanic religions. That’s what inspired the sigils that I use in the tarot performance. These Germanic religions are part of my really ancient culture, and the symbols they used instead of the alphabet isn’t being used anymore. I’m particularly interested in symbols; symbology, which images always mean the same thing across cultures, or in a lot of cultures. Water, for instance, often represents spirituality, flow, emotions. Fire often represents drive, vitality, life. This is a common language—not in a religious way, but in an archetypal way.

Tarot is about presenting these archetypes that have been passed down for generations, these ideas that exist in all of our lives. In that way, tarot can be used as a medium of self-recognition. It’s a tool to realize new things about yourself by framing it with all of this archetypal imagery and ideas that make a lot of sense. I’m interested in these images that represent larger ideas.

And as a visual artist and designer, images have always been interesting to me. How can you use colors and images and textures and ideas that an audience member will see on stage and immediately understand the context. Like if a woman walks on in a red dress—in our contemporary culture, it might instantly read as sex appeal. If everyone is wearing black, that says funeral or mourning. You see an image and instantly a lot of contexts comes to mind, and you suddenly have a greater understanding of what’s happening because of the image.

Can you tell me more about specific design choices you’ve made that were influenced by your research?

Bowers: Yes—I’ve moved away from some larger immersive experiences that require a lot of space. It becomes this situation where there are going to be tons of people, and I know that I’m only going to be able to provide one-to-one experiences with roughly 10 of them, which is a weird dynamic. So the version of Arcana Obscura I’m working on now is going to be something that I can do anywhere; that I can fit in a suitcase and set up anywhere. I can take it to a party, or any kind of event, and it’s all in one bag.

I’m also developing a book with instructions. I have a really wide range of what can happen in readings depending on where the audience member is and what they need at that moment. For example, for certain themes that are recurring in someone’s reading, I have poetry or bits of text that I can give them.

As far as specific design choices, there are some things I’m definitely choosing to avoid. I really do not want it to pander to a general stereotype of mysticism, particularly in terms of how I dress. I don’t want to wear all black. I don’t want to fabricate a general fortune-telling vibe.

I’m turning inward to find how I want to present myself in a way that is very sophisticatedly me. What I’m trying to do isn’t meant to be derivative of any other traditions.

And in my illustrations for the book, I have a character that’s not from any particular background or gender. I’m making sure the figure you’re following through the story isn’t a specific person so that you don’t have that level of alienation. A lot of illustrations in tarot are very white. And there’s a lot of male and female. So that’s something that I try to change in my productions.

Is “believing” in tarot a prerequisite to participating in Arcana Obscura? (I want to believe).

Bowers: That’s really important to talk about! I think that what people want to think or whatever makes them more comfortable—that’s real to them. And the emotional experience of having that moment of seeing yourself in the cards is what’s important.

Whether or not that’s just chance or something greater—that’s irrelevant. It’s about the person’s experience.

Bowers will perform Arcana Obscura at HOMESET, a salon series bringing artists together to share their ideas and works in progress. The next HOMESET is on July 14 at 4 PM, at a secret location in Roger’s Park. More information about the event can be found at facebook.com/events/258949491325692/?active_tab=about.