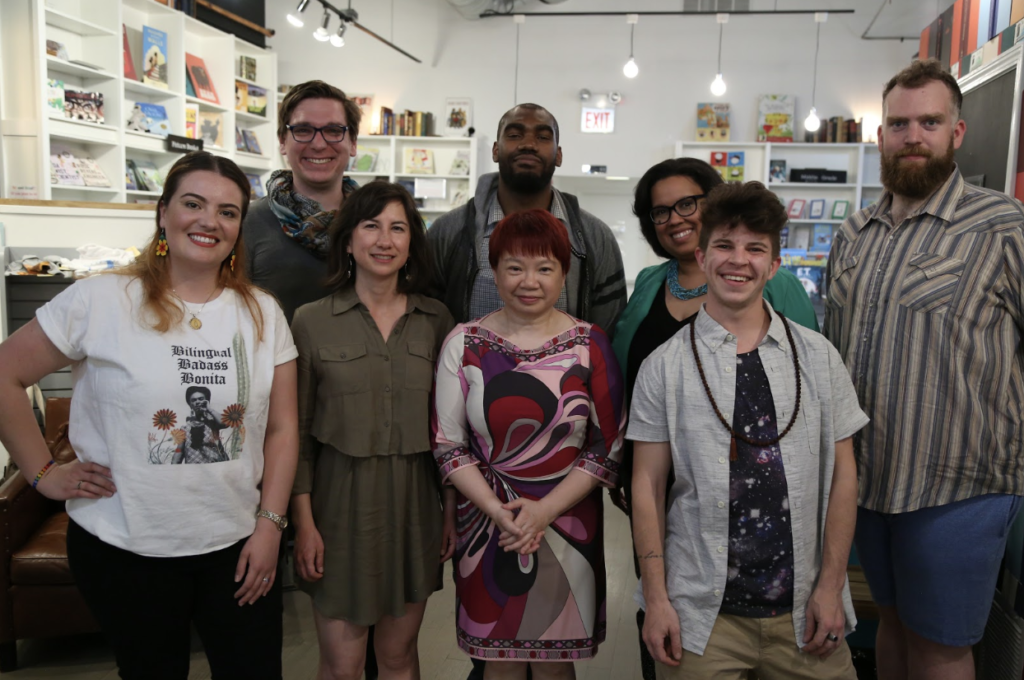 A Path to Conscientious Storytelling: An Interview with Ada Cheng

Pictured above: Ada Cheng meeting with fans at Women and Children First Bookstore/Photo: Given by Ada Cheng

When I first noticed Ada Cheng, I was sitting inside one of the iO Theater’s dim studios, waiting for the start of Girl Gang (one of IO’s most hilarious and empowering shows to date). I was laughing and suggesting god knows what, when the second group (which Ava was apart of) came on stage.

“Man, look at her hair!” I said, turning to my friend, pointing her out. “It’s so raw! And all of her colors!” He agreed swiftly, and we impulsively discussed some outrageous theory of expression, and of course, watched another uproarious performance be carried out.

Ada Cheng not only represents herself with a distinct, fashion-oriented eye, but has been intellectually stimulating the city since 2001. Cheng is an educator, comedian and novelist in Chicago. Her writings have been published and produced in the US and cyberspace. With a five-star rated book on Amazon (Standing Up: From Renegade Professor to Middle-Aged Comic) and numerous publications with different magazines, (my favorite being Enough: America’s Wholly Visible Underbelly) Cheng has quickly made a name her work, all which focuses on 1) embracing fear, 2) living out your dreams and 3) being a woman in the United States.

When I found out about her podcast, Am I Man Enough?, I knew I had to discuss her theories of expressions and what it was that made her post as a professor of sociology to become her own boss for upcoming generations.

The podcast developed by Cheng represents a series of stories, told by folx of all gender identities and their interpretations, art forms (poetry or spoken word) and honest thoughts behind toxic masculinity. When I watched the live podcast, many deep feelings rose, causing not only my viewpoints to alter in terms of living in a gender-based society, but to consider my own struggles as a woman.

How long have you been a storyteller?

I have been a storyteller since January 2016, when I started telling stories publicly (meaning outside of classroom contexts). I started out telling stories at open mics and then moved on to perform at storytelling shows all over town and in different cities in the United States. It has been more than two years.

What point in your life made you decide to create Am I Man Enough?

I taught subjects on gender, sexuality, masculinity and sex at the university. After I left academia, I always wanted to create some kind of forums or platforms where we could have critical conversations about these topics outside of the academic context. When I created this show, there were already a couple of storytelling shows on feminism and gender, such as Sappho’s Salon (by Eileen Tull and Liz Baudler) and Feminist Happy Hours (by Alicia Swiz), but not necessarily specifically on the subject of masculinity.

I started out hosting documentary screenings and discussion sessions at Volumes Bookcafe in mid-2017. After a couple of sessions, I was debating what other types of platforms I could create to promote the discussion on toxic masculinity and the construction of masculinity and manhood.

In fall 2017, I had the opportunity to take over Pour One Out, an existing storytelling show at Volumes Bookcafe. I decided that the theme for my first hosting month at the bookstore would be “Am I Man Enough?” It was going to be a podcast. I wanted to use that first show as a test see if there was an existing interest to explore the impact of masculinity and if audience members would enjoy a show that blended storytelling and social critique. It was a hit. I then made the decision to make Am I Man Enough?: A Storytelling/Podcasting Show a recurring, traveling show. The creation of the show and podcast was the result of several converging forces.

For you, what’s been the inspiring component inside the podcast? The most difficult?

My philosophy for the show/podcast is that it is for people with good stories to tell, but not necessarily people who are already experienced storytellers. For all my shows, I book both experienced, as well as novice storytellers, including people who have never done storytelling. I have always been impressed with the new storytellers, who have consistently done a marvelous job in telling their stories and performing on stage. I am very inspired by their courage because what I want to do is to provide a platform for people to tell stories that are relevant and important to their experiences. I am glad that I can achieve that goal with this show.

Since this show blends storytelling and social critique, I ask storytellers to integrate critical analysis in their stories and to balance personal narratives and critical reflections. This is not always easy to do. I have been amazed by the level of critical analyses that storytellers are able to bring to the fore with their performances. I feel very privileged to watch people step up and do the kind of storytelling that may not come naturally to them.

The most difficult part has been to engage audience members in critical dialogues. The first show included dialogues at the end. In that sense, storytelling may not be the best platform to have a conversation about critical issues of our time. Other platforms, such as panel discussion or in-depth interviews, would better serve that purpose.

Do you have any distinct future plans in regards to Am I Man Enough?

Yes; the most immediate project I have in mind is a publication. It can be a collection of short stories told on the show or a mixture of academic chapters along with short stories. I am still debating. However, publishing a book is definitely one of the goals I have for this project.

So I am toying with different ideas. These are all works in progress.

Your publications are filled with honesty and a defying passion for change, both racially and sexually. How long did it take you to find this sense of truth and bravery inside your work? How did you know it was time to speak?

In my own journey of storytelling, I realize that we don’t choose stories to tell; stories will tell us when they want to be told and need to be told. You can’t force them; you need to trust them.

During the first year, I told a lot of stories about immigration, race and intersectionality because our time demanded them. It still does. While these stories were told because of the urgency of the time, it was also because they were ready to be told.

Looking back, I can see that difficult stories were simmering waiting to be told, e.g., stories about domestic violence in my parents’ relationships, those in my own story, stories about sexual assault. I didn’t really tell them until late 2016 or early 2017. The time was needed for me to gain some perspective on my own experiences and process them, so I could put them into words and tell them with power.

Stories are narratives we construct to legitimate our reality, particularly for those of us whose realities are often defined by others. We need to tell stories to affirm what has happened to us is real and to define our experiences in our own terms, as opposed to defined by others.

I think that the sense of truth and bravery is in all us all along; we just need to trust ourselves and find or, more importantly, “create” the right platform for us to speak our truths.

What would you tell someone who is struggling to come out in their own truth?

In my storytelling classes, one issue I ask people to think about is: what’s the fear that’s blocking and confronting you? Sometimes it is not that people don’t believe their stories are worth telling; often it is the fear, real or imaginary, that haunts them. It can be the fear of judgments, guilt, shame, embarrassment, and a host of other factors. It is important to explore what that fear is about. Do know that there will always be rewards and costs in telling one’s stories. One cost I know is that stories don’t become buried after we tell them. Stories will cut us softly in new ways. The process of telling stories is a double-edged sword.

Another thing I think important to recognize is that appropriate platforms need to be there for people to tell stories as well. If you find it difficult to tell your own stories in existing shows, create your own space. That’s why I created the masculinity show as well as the other show about Asian American experiences so people who have different experiences can share stories in their own space.

What do you think is still missing inside the fight between gender equality? What are people still not hearing?

We are at a very scary point in our history. On one hand, you have the #MeToo movement and on the other hand, we as a society are going backwards considering the current political climate. If the former is about women telling their own stories, the latter represents the power that continues to be controlled by dominant groups. This exposes one major issue. Controlling the narrative (or the representation) is simply the first step; you can’t stop there. The key is to reshape the material (structural) realities that shape our stories. Narratives do not equal reality even though these two go hand in hand. We seem to be moving forward in one but we are also moving backward in the other. We need to be part of that power structure.

What’s your favorite part about being a woman?

Getting older and turning 50. Believe it or not, I am enjoying this stage of my life where I don’t think too much about other people’s opinions. I don’t feel the need for approval or validation. I don’t feel the need to settle for less, and I don’t put up with nonsense from others anymore. I am at a point in my life where integrity values more than anything else, so it has become much easier for me to make decisions on issues that matter to me.

I don’t waste my time in self-doubt. When you feel a sense of urgency because you know life is too fragile and death is imminent, you just make decisions, move on, and keep going forward. I love my brilliance, wisdom, honesty and vulnerability. I respect myself enough to feel okay standing alone or being alone, when necessary. I am in no way perfect, but I am absolutely happy with my own imperfections. I am work in progress, but I am happy with how far I have come and become.

This is what I love about being a woman: owning my own power and using it with kindness and wisdom. And it took me decades to get to this point.