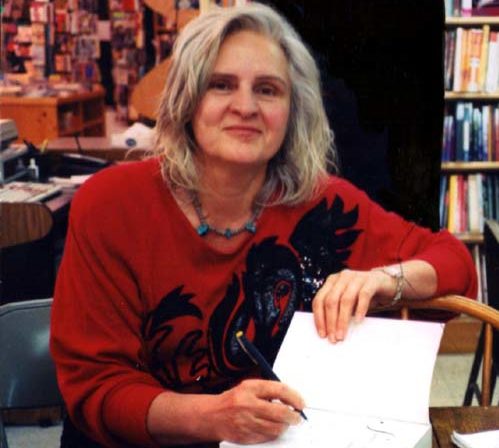 And We Will Never Die Off: A Profile-In-Passing Of Penelope Rosemont

We don’t have her contact information, but this is the age of the Internet. It’s impossible to disappear completely.

I begin with a search for Penelope Rosemont’s email. The artist, one of the founders of the Chicago Surrealist Group, has a Wikipedia entry, touting her long career supporting radical causes. Nothing on the page lists recent appearances since 2007, when she attended a meeting at Loyola University. There, she encouraged the students to form a new branch of Students For A Democratic Society, the social activist group that Rosemont joined in the 1960s. While the original SDS flamed out, the new organization formed in 2007 has 120 chapters nationwide. None of them have Penelope Rosemont’s email.

I try to find the last time Rosemont was seen publicly. After digging, I stumble upon an event from this past June, a “surrealist soirée” hosted by The Neo-Futurists. Penelope Rosemont appeared alongside poet Ron Sakolsky, providing recitations of her own poetry at select moments during an evening of “various embodied Surrealist ambulatory and textual explorations, and perhaps the occasional seance.” The event was co-hosted by Art Design Chicago. I contact their communications manager. I wait for a response.

I find the most recent interview she’s given—in 2012, to an independent blog called Never The Same. In it, she discusses the formation of the Chicago Surrealist Group, in 1968: a surrealism exhibition at the Art Institute of Chicago so incensed Penelope and Franklin Rosemont, as well as their fellow surrealists, that it encouraged them to organize their own counter-exhibition of “true” surrealist art at a storefront in Old Town. The space was unremarkable, aside from a mural of Bugs Bunny on the door—thus the space was christened the Club Bugs Bunny. The Chicago Tribune reviewed the show, but inaccurate reporting led her husband Franklin to comment that they would never speak to the press again.

Not a good sign to get another interview from her. I find the contact information for the writers of Never The Same. I email them, asking if they have any connection to Penelope. I wait for a response.

I sort my search results by recent publications. The most recent mention of Penelope and Franklin Rosemont is in a blog post from July, from the University of Michigan library. The article, by Lori Eaton, details the holdings of the Labadie Collection: papers, photographs and essays by the Rosemonts; how they began the surrealist journal Arsenal to stop the spread of misinformation about the surrealists; how Penelope Rosemont became the Chair of the Charles H. Kerr publishing company in 1983, the largest radical publisher in America. But the description of their work cuts off in the mid-1980s, after the revolution became more about writing than about artistic creation. I message the archivist at Michigan, asking for any contacts with Penelope they can provide. I wait for a response.

This isn’t working. I need something more active, details about Penelope Rosemont’s achievements.

I return to the drawing board. Penelope Rosemont is an avid writer. I check the Chicago Public Library for her works. Harold Washington holds four copies of her 1998 anthology Surrealist Women—a collection that “seeks to bring to light as much as possible the quality, range, diversity and vitality of women participants in the international Surrealist Movement,” to quote Penelope Rosemont’s introduction. Her most well-respected work is called 1001 Dawns, 221 Midnights—a collection of essays she contributed throughout the latter 20th century to the surrealists’ self-published journals. The Library has no copy.

I check out Surrealist Women. Being from 1998, no email is listed in Rosemont’s author blurb. Both she and the Chicago Public Library cite her acquaintanceship with André Breton, one of the titans of Parisian surrealism. Rosemont was one of the only Americans invited into Breton’s private circle. Again, she cites her husband Franklin as an influence.

I look up the original Chicago Surrealist Group. The Rosemonts loom large in the collective, founded in 1968. I begin to search for the other names. Robert Greene…a search finds his books, published in the 1980s, but he’s quickly supplanted by the motivational theorist who shares his name. Erik Matheson…I’m finding music educators, film editors, LinkedIn profiles and MUSC doctor’s bios, but nothing related to surrealism. Schlechter Duvall…his paintings are beautiful, and a single-service Blogspot page has been set up as a memorial to his death. Lester Dore…

Lester Dore is on Twitter. At least, I’m fairly certain that the Lester Dore at @Diogenes2017 is the correct one. I try to search through the posts for any sign of Penelope, any references to the surrealists. Nothing there. His content suggests an anti-government sentiment—but that could be anyone. I message him, on the off-chance that it’s the right Lester Dore. I wait for a response.

At this point I’m getting desperate. I need to contact Penelope before this article turns into just another summation of her life’s achievements, a patchwork list of radical actions and writings that helped Chicago to become the focal point for American surrealism throughout the twentieth century, and up to today. I need a primary source from the 1960s.

I return to the Never The Same interview. Briefly, I consider messaging my editor about the possibility of simply linking to it, and letting Rosemont speak for herself. We could try to claim that such a Profile is in the ‘spirit’ of the surrealist work she pioneered—a deconstruction of a Profile, fitting its subject. But that feels cheap.

I look over the interview again. There’s an image of the poster for the original exhibition at Club Bugs Bunny, in October 1968. I realize that this year will mark the 50th anniversary of the show.

I also notice an address on the poster.

I’m standing at the intersection of West Eugenie Street and North Mohawk Street. The storefront on the northeast corner, 524 West Eugenie Street, is the former home of Club Bugs Bunny. I don’t know why I traveled here. I suppose I was trying to conjure up the spirit of Penelope Rosemont. Somehow.

The storefront is abandoned. If anything has replaced the Club since its closure in the ’60s, nothing could prove it.

The front door, as well as the side door leading upstairs, are both painted black. Looking closely, a fresh coat of paint looks less than a year old. I scour the door. No silhouette of Bugs Bunny is apparent.

Sitting across the street, I try to imagine the scene: Penelope Rosemont, alongside Franklin, Dore, Greene. Standing outside this same dark storefront, the window boxes filled with art, a painting of Bugs inviting you to the doorway. Penelope leans against the tree just in front of the doorway. The cars are scarce in this neighborhood. Just up the block, the spire of St. Michael Catholic Church can be seen…

As I walk away, I glance back at the shadow of an exhibition hall. In the upstairs loft, a fan spins. Penelope Rosemont has vanished.

Penelope Rosemont is a writer and social activist, and a member of the original Chicago Surrealist Group from 1968. Her writings include Surrealist Women, Surrealist Experiences, and The Apple Of The Automatic Zebra’s Eye. Despite our best efforts, she could not be contacted for this article.