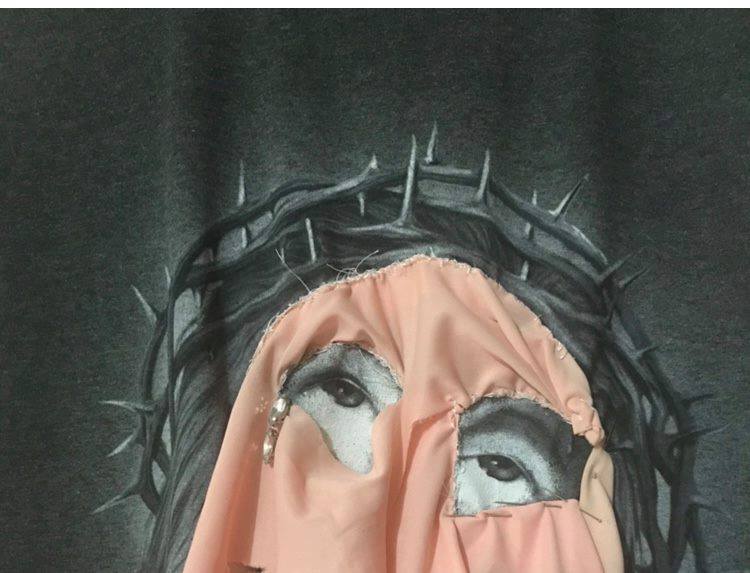 When Sofia Moreno announces “a new body of works,” you can come expecting a new body.

“My art is biographical and shows the transformations of my body creating a myth of Sofia,” she explained to me as I watched her install at No Nation Art Gallery and Tangential Unspace in Wicker Park. A major transgender multimedia and performance artist, Moreno grew up in Coahuila, Mexico, but calls Chicago home.

As an anti-institutionalist, she’s especially at home in underground spaces like this one. No Nation’s second-floor live-work gallery is inconspicuous on street-level, but a door wedged between a furniture store and a bar leads up to an anarchic wonder-world inside. After paying the “entrance fee” (pick your poison: a poem or a butt print), you’ll find a looming tree taking residence in one corner by worn-in vintage sofas and a projector.

Deeper into the large apartment space awaited Moreno’s exhibit, which was co-presented by s+s project. A prismatic sheen covered the back wall, graced with dyed repurposed soft fabric sculptures and punk-surreal hanging fashion assemblages. When I came to chat with Moreno, monstrous drawings (“selfies”) and other intermedia works were still strewn on the floor, waiting to go up.

We spent some time unpacking the exhibit’s title—BioPharmacoMythology, a neologism compounding “biography” + “pharmacology” + “mythology.” That distinctly trans* juxtaposition lodges ancient past (specifically, her deep identification with the androgynous Maya moon goddess), present and future within one body of work—or should I say, a body in work. As the exhibit notes made clear, this work is reclamatory and responds to negative stereotypes about trans women of color, “whom are simultaneously marginalized and fetishized as gorgeously grotesque.”

Contextualizing the “Pharmaco” that bridged “Bio” and “Mythology” (a variant of Audre Lorde’s “biomythography”), Moreno referenced Paul Preciado’s Testo Junkie: Sex, Drugs, and Biopolitics in the Pharmacopornographic Era. In a coincidence of fate, Preciado was also on my mind since I was reading him the week we met. Preciado outlined the “pharmacopornographic” as the increased enmeshment of the pharmaceutical and sex industries with capitalism as political systems of monitoring and transforming “gender,” “sex,” “sexuality,” and “pleasure.” Porn, a recurring subject for Moreno, as in her P o r n A g a i n video works, is one such regulated technology of intimacy and pleasure.

Moreno’s transgender body could also be a technology.

“I’m making my body into a pharmacological design.” By way of explanation, Moreno gestured to her used estrogen hormone needles injected into one soft sculpture. A school girl skirt penetrated by a fistful of needles—a time lapse of “how much women has been put into my body.” She related how this art piece caused problems at border patrol, so she told them the needles were trash. Then she invoked, half-jokingly, “My work is alive even though it’s trash.”

So we talked about trash for a while. Moreno confessed she never throws anything away out of guilt. Much of her work repurposes old fabrics and materials that others might deem “trash.” But, as Moreno pointed out, trash is personal.

“Trash relates to my gender,” Moreno said. “Trans bodies are being disposed by society. My work is an extension of who I am—I am treated as trash as a brown person.”

I mentioned queer indigenous poet Tommy Pico, a similarly-minded proponent of junk’s potentiality, and I quoted his most recent book Junk to Moreno, “Junk gets a bad rap because capitalism Junk isn’t / garbage It’s not outlived its purpose—Junk awaits its next life.” Moreno nodded her head enthusiastically.

Enough trash talk. Moreno shared with me that she’s constantly grappling with “how to make art that’s actually beneficial for an entire community.” When I came to the opening on Friday night and saw all the creative trans and genderqueer community that turned out, I saw that she wasn’t just talking the talk: intentional community-building is crucial to her practice. Moreno treats art as a form of history-making, of archiving trans existence.

The exhibit had a strict no photos policy, partially because the work is on its way to a smaller exhibit in New York next, but primarily because Moreno wanted the audience to be in the moment to engage with the art. Not as voyeurs but as co-conspirators. This sentiment resonated with me. I had just come back from Berlin, where clubs would cover phone camera with stickers to prevent photos, for similar reasons. Selfies or photographs would have been unnecessary distractions to the space: it was enough to be there and be a part of the temporary community Moreno built.

Sofia Moreno’s exhibit BioPharmacoMythology: A Dancer’s Reward showed in Chicago at No Nation at 1542 North Milwaukee Avenue, August 24-26. You can see more of her work on her website sofiamoreno.com or her instagram @sofia________moreno.