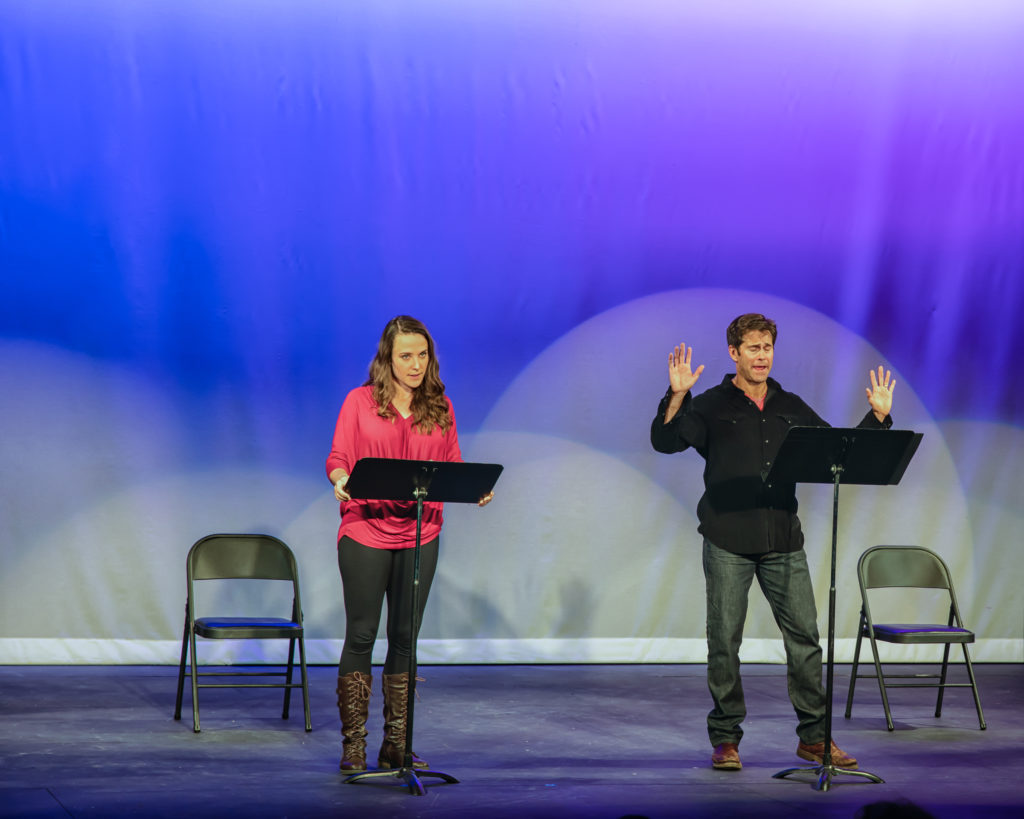 Theater About Women, For Everyone: Artemisia Provides Platform for New Feminist Work

Pictured above: Circular by Laura Shamas received a reading in the 2016 Fall Festival. The two-hander play between one man and one woman in which a young army psychiatrist finds herself in the world of The Odyssey while serving in Afghanistan/Photo: Courtesy of Julie Proudfoot

When Julie Proudfoot founded Artemisia Theatre in 2011, she did so knowing she wanted to host a new plays festival to spotlight feminist work.

In the beginning, one of the new works would be chosen by audience members and given a full production. Now, one of the six plays chosen by Proudfoot will be given a two-year development process before Artemisia puts up the show.

Though the audience won’t be choosing the show directly, they will observe further readings of the chosen production. Then the audience can participate in talkbacks to engage with the playwright, and thus the playwriting process.

“The Fall Festival is play led rather than production led,” Proudfoot explained. “That’s why it’s always been done in staged readings—there is a strong focus on the text.”

Proudfoot said she wanted the audience to be engaged with whatever the playwright was trying to do with their work. To be sure that the community was part of the process.

Moreover, the Fall Festival is a way to introduce new feminist work to the broader community.

According to Proudfoot, “the idea of a female-driven play is still relatively underutilized in the theater.”  There are now many directors, staff and performers, but the female voice is still largely absent in theater in general.

“I think there is a lot of gender influence in theater as in ‘gee, there are women in this and they are strong,’” she said. “…but their journeys and actions and their reversals are influenced by the role they play in a man’s life. That’s not her story. That is male wish fulfillment.”

I sat down with Proudfoot to speak with her more closely on the work that Artemisia is producing.

Do you see the landscape changing?

Proudfoot: I do and I see it more on television than in theater. [Proudfoot once worked as a story analyst for HBO.]

I feel like Hollywood is way ahead in terms of being willing to really explore feminist narratives. They may turn on some tropes and turn on some easily digestible themes, but I think it’s incredibly important work they are doing. They are shattering the myths that were carried on television for a long time.

It goes back to Lucille Ball. This incredibly smart, funny, beautiful flawed woman who shattered all kinds of ceilings with her show.

What about in Chicago? Do you see the landscape changing here?

Proudfoot: Yes, I do. I think there has been a lot of support, especially by major funders for Artemisia and loyal audiences and talent who are inspired by the Fall Festival.

That makes such a core for a theater event. Not only is it a festival, but they are full length plays. No one else does that. I can’t imagine trying to do this anywhere else. As challenging as Chicago can be in terms of these rigid ideas of what a producing theater is in Chicago, it is absolutely a theater town that is baked in collaboration.

The intersectionality that can happen in Chicago is what makes it beautiful. There are so many ways in which I can intersect with other theaters. Silk Road Rising, [for example], [has] very strong feminist voice in what they do. They seek out ways they can share that with Artemisia and support us in ways that help our theater. There is a lot of that going on.

Having said that, a lot of our writers come from New York and other places. And say to me when their play is chosen “oh my god, if we had a festival like this in …”

We have this national/international voice which is interesting. I’m trying to find a way to explore that more. I think that that is very, very important for our future as a company and for our future in influencing the theater in the United States.

But as part of a great play, you are shaking our audience—if the audience goes home satisfied they’ve seen a mediocre play.

The tagline “Theatre—About Women—For Everyone” is really fascinating to me. Can you speak to what brought that about?

Proudfoot: We have always hit the empowerment in our marketing very hard. I think with the cultural shift after the recent presidential election, there has been quite a shift in terms of what feminism really means.

There has been a lot of backlash in terms of feminist theater. You can fight back on that or you can have compassion and empathy for the audience. Maybe they don’t understand that we are illuminating women’s journeys, struggles and lives.

We came up with this marketing byline to say we are trying to welcome everyone.

It also comes from honest discourse or honest arguments. I believe in conversation. We have these dedicated democratic conversations and we have been backed for our democratic conversations. We take someone who challenges us and talk to them. I think it’s very important to disseminate the fears around feminism. Male bashers, men haters, family disruptors—it’s absolutely not true. A feminist is someone who believes in equality in gender. It’s about human rights in gender.

We are using the art of theater in a double way. We are bringing theater out of the 50s and say “where are your feminist stories?” They can be equally entertaining and interesting and challenging and they can add to and bring about new perspectives.

The line-up for the fest this year is for everybody from a satirical comedy about cows at a farm to a dark thriller where an antihero, the woman, is an antihero. You can get power through murder too.

We worship dark male characters. But dark female characters is a no-no. It may be on a moral side you don’t like, but that goes after the moral models that women are better than men and carry the moral center.

We go after all this stuff to welcome that audience.

What does Artemisia’s mission mean to you personally?

Proudfoot: I think to equalize women’s voices in our culture.

I think to equalize women’s voices in our culture. One of the ways that you control and curtail a society is to eradicate art that is challenging, which is anti-democratic. Not to say that a plethora of male stories makes us fascist, but the exclusion of feminist stories often feels ubiquitous. It’s taken for granted.

A feminist voice in theater is so underdeveloped and invisible, it’s still not really understood. So often women’s experience culturally is defined by men. So many women have allowed that and been defined by that. They also serve as sexist influences on other women.

I was in front of our namesakes painting “The Judith” at the Art Institute and a woman behind me said, “I don’t believe a woman painted that.” That was in 2014. Artemisia Gentileschi’s paintings were attributed to men because she painted strong women who took agency in seeking revenge.

The male-driven culture is the bar. You can’t create your own bar. Meet his expectations not your own. You are in a society is based on male expectation or you are the only woman at the table and you had to beat every other woman to get to the table.

I want to equalize Her voice in the theater. To tell Her story.

How do you define a “feminist play?”

Proudfoot: At Artemisia, a feminist play is defined by and carried by a leading female character.

She is equal in every way to a leading male character. She’s complex, she is not a stereotype or trope. She has complicated relationships. She has a backstory. She has an antagonist. We take the classic structure and put a woman in the hero’s journey. What we are really doing that is very different is that at Artemisia the feminist journey is about empowerment.

At the final turn of the story, regardless of the problems the leading female has encountered, she has an empowering catharsis. There are two questions we ask—“did the play empower women?” And “did it challenge you to see women differently?”

Are they seen as victims of a male society? There is a place for those plays, but what I want is for generations of young women to see themselves as the drivers and heroes of their own lives. It’s about a female identified character coming to a sense of autonomy, agency, empowerment as a solo human being and as an individual. One of the wonderful things that happens at the fall festival is that men see these complex beautiful women aren’t bashing men. If you are bashing men you are still being defined by them.

Bashing men is not the point

Artemisia Fall Festival 2018 (which includes performances of Scratching the Surface, Witch Camp, Cash Cows, Things That Are Round, Mine & Yours, Every Waiting Heart) occurs September 24 through October 3 at 7:30 PM at The Edge Theatre, 5451 North Broadway Avenue. Tickets available by calling 312-725-3780 or online at artemisiatheatre.org. Tickets are $10.