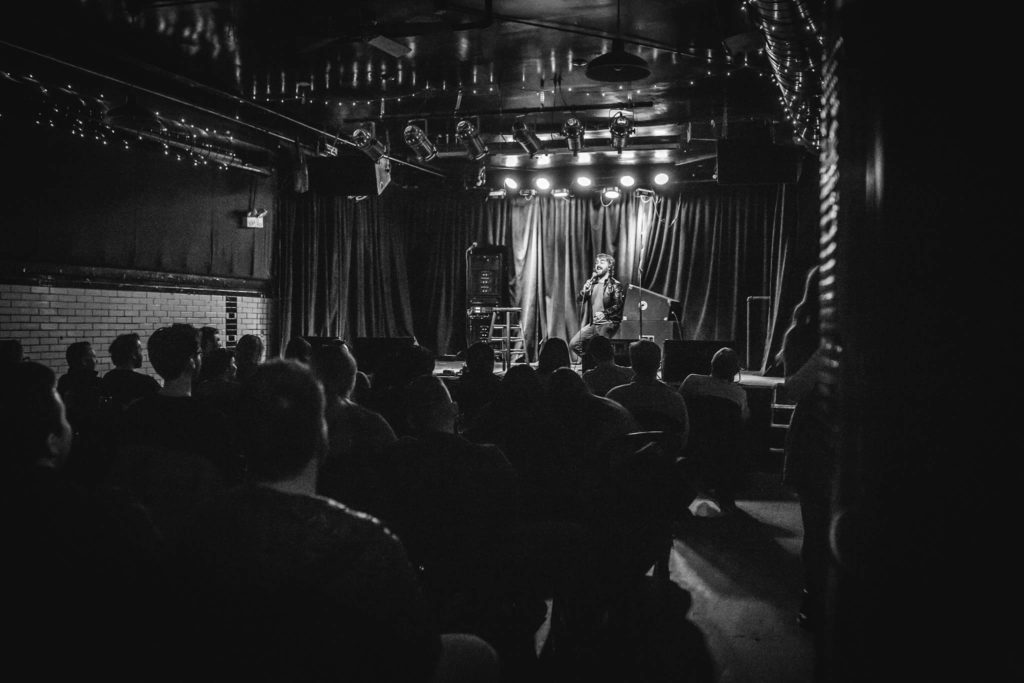 Fighting For Nothing In Particular: A Profile On Chicago Underground Comedy

“WHAT ARE WE FIGHTING FOR?”

Led by host Meredith Kachel, this chant began the August 28, 2018 show of Chicago Underground Comedy. Affectionately known as ChUC, the show is a fast-paced night of comedy showcasing several comics in tight sets—back to back to back to back. Since 2008, ChUC has been performed out of The Beat Kitchen in Roscoe Village every Tuesday night at 9:30 PM for five dollars.

Back when it started, ChUC was an ensemble-driven show, with a regular, defined cast each week. As Kachel put it: “that was a bad idea.” ChUC’s Former producer Jeff Hansen turned it into “a playground.” The current team consists of three standups: Meredith Kachel, Stephanie Weber and Nicky Martin, who have been running the group for three years. Day to day, they field emails from out-of-town comics hoping to book performances, make plans for long-term bookings and special performances and of course, sketch out plans for the Halloween show. In their spare time, they keep one eye open for new talent around town. In the daylight hours, Kachel is an illustrator, Weber writes and performs at the Lincoln Lounge and Martin writes comedy and works in software. They strike a balance between debuts, local favorites and headliners with decade-long careers.

“What makes someone fit here that they wouldn’t fit somewhere else?” I asked them.

“I would say a road comic fits in here less than say, a variety act,” Kachel said. “We tend to fuck around a little bit more.”

“It’s a show in a punk bar,” Weber continued. “It already has this underground, slightly alternative vibe. Really established performers will try new stuff here, too.”

“It’s definitely weird to see someone try a joke here that shows up on Netflix nine months later,” Martin concluded.

Martin says that part of the draw for these bigger-name comedians is the timing of the event. Tuesday nights might seem odd, but when a touring comic is in town, the reputation of this 13-year-old club can entice them to stay for one more gig.

Nate Craig, for instance, has been performing with ChUC since its beginnings.

Travis Irvine, a comic of eleven years, also remembers the Beat Kitchen as “the hottest show” in 2009 when he first was aware of it, though August 28 was his first performance at ChUC. C.J. Sullivan remembers the old “cast” format of the show; though he was not a member of the initial lineup, he joined soon after. To get on the list tonight, he simply emailed that he would be visiting town and booked the spot with Kachel, Weber, and Martin. The comedic melting pot of the club also brings in a “real mix of audience members,” from German tourists to local Chicagoans, creating a show that “doesn’t get too weird and doesn’t stay too normal” as Kachel said (coming up on the fly with a crisp tagline for this article).

On August 28, the show consisted of comics from Chicago, Houston, New York, Canada, Los Angeles and Ohio, and covered topics like synchronized swimming videos, self-driving cars, knock-off shoes, horror stories on the Red Line and being, as Sohrab Forouvesh describes himself,  a “middle-eastern comedian even your racist uncle would like.” The nine comics who performed were led by Kachel herself, with Forouvesh, Sarah Perry, Chris Higgins, Mallory Bradford, Irvine, Mickey Housley, Alex Pavone, Craig and Sullivan.

When I spoke with the producers and performers, I was struck most by how friendly the room was. Kachel, Weber, and Martin spoke to me like we were old friends. Craig and Sullivan were eager to talk about the old days and how proud they are of what ChUC has become. The cast and audience mingled together in the bar after the show. Combine this atmosphere, the warm Christmas-light glow of The Beat Kitchen, and the comic lineup, it’s no wonder so many audience members come back week after week.

Chicago Underground Comedy performs every Tuesday at 9:30 PM at The Beat Kitchen, 2100 West Belmont Avenue. If you’re a new comic interested in ChUC, you can email a clip and bio of yourself to booking.chuch@gmail.com.