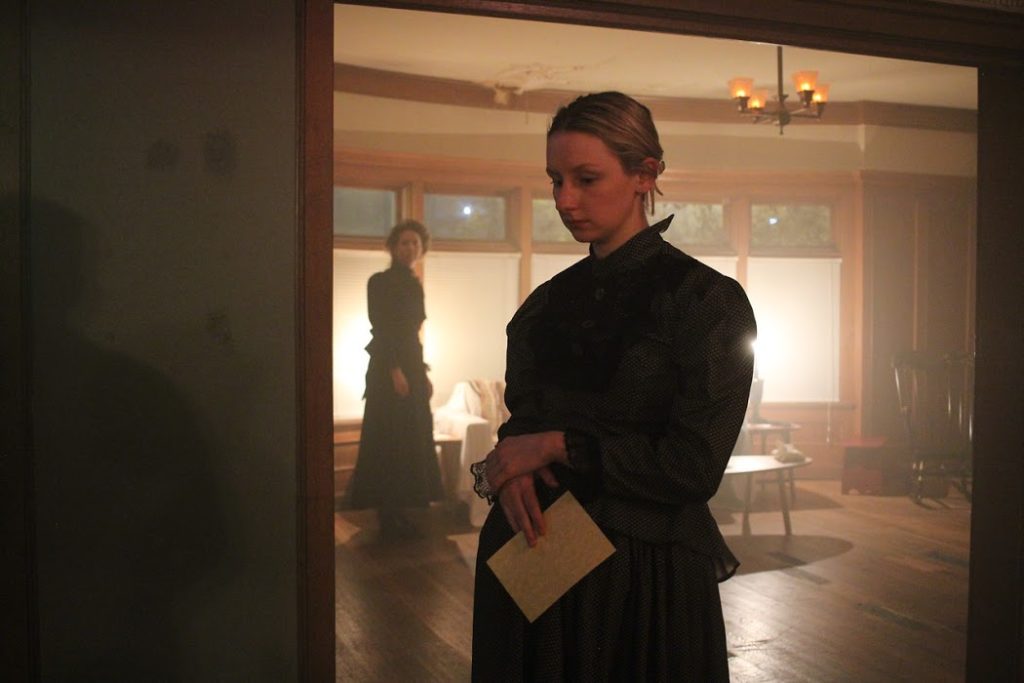 In The Bardo-State: A Poem Expression To Cursed: An American Tragedy

Pictured above: Christina Renee Jones and Anna Connelly in Cursed: An American Tragedy/Photo by Gracie Meier

Editor’s Note: This is an expression by Mike Haverty in response to Cursed: An American Tragedy in a poem form; it is followed by information about the work and process.

Cursed: An American Tragedy is an immersive epic produced by Birch House Immersive, written by Lauren N. Fields and Janie Killips. Directed by Fields, the show explores the toll of a family curse played out through three generations. These distinct eras play out simultaneously, asking the audience to actively participate in how the story unfolds.

Our stories run through the hallways.
each step in relationship
to a shoeprint long past.

I remember winter days,
walking behind my father in the snow,
jumping to each of his bootsteps.

Invariably I slip once or twice,
leaving large knots on his fine stitches
sewn through untouched fabric.

Walking through the Cursed house,
I am dead, alive and in-between.
In the bardo-state my hand is taken

from room to room,
from intimacy to communion,
in the bardo-state I see myself

in the expressions of other guests,
asked to dance, asked to console,
asked to eat a blueberry muffin.

An audience member looks back
as the host offers his hand.
From the bardo-state, their self

fills the shape of a new scene
appearing as transcendence
within an elegant machine.

Three of us were pulled aside by a soldier.
He asked if we had ever held a gun.
“I have,” I said.
The soldier looked at me,
“How did it feel?”

“Heavy.”
“Heavy in its burden or in its weight?”
“…A lil’ of both?”
Another audience member said she never held a gun.
“In America?” he asked.

I told him “Holding a gun, I was scared by
how simple it is.”
he said “Well, that says more about
you and your relationship to
wielding power.

You are afraid of your
potential of power.”
“Oh.”
Yup.

I think of the people I’ve lost,
themselves have suffered ghosts
of the last generation’s traumas.

A woven family tree hangs
above the mantle from hooks.
Standing in front of the tapestry

is an older gentleman watching a scene.
His face is fixed with a child’s glee
finding joy in the new in-between.

Walking through the halls of an old Chicago mansion, Cursed benefits from building a story about the past into the halls of a historic landmark. I must admit I didn’t come in expecting an eerie experience, but Cursed delivers spooky in all the well-earned ways. Cursed is a slow burn,  igniting when William (Gary Henderson) welcomes us into a fog-filled foyer and stoked into roaring setpieces by the play’s end.

As characters grapple with faith, fate, and loss, we are given an intimate glimpse of coping. As audience members, as human beings, we are put in a position to join in the small magic of healing rituals and sharing burden. Big and small, living room to closet, we are all connected.

Performances of Cursed: An American Tragedy occur Thursday through Saturday at Berger Park Cultural Center, 6205 North Sheridan Road Chicago through November 17. For more information, visit birchhousechicago.com, contact them at birchhousechicago@gmail.com or find them on Instagram, @birchhousechi.

Mike Haverty
Mike Haverty (they/them/theirs) is a freelance writer for Scapi Magazine. They are also a writer and performer of personal essays, solo pieces, sketches, and is known to design a puzzle from time to time. In addition to writing about intersections in comedy at Reclaiming Laughter, they collect old footage curios for the YouTube channel VHShambles. Connect with them on Facebook or Twitter.

Mike Haverty
Mike Haverty (they/them/theirs) is a freelance writer for Scapi Magazine. They are also a writer and performer of personal essays, solo pieces, sketches, and is known to design a puzzle from time to time. In addition to writing about intersections in comedy at Reclaiming Laughter, they collect old footage curios for the YouTube channel VHShambles. Connect with them on Facebook or Twitter.
More from ExpressionsMore posts in Expressions »
More from UndergroundMore posts in Underground »