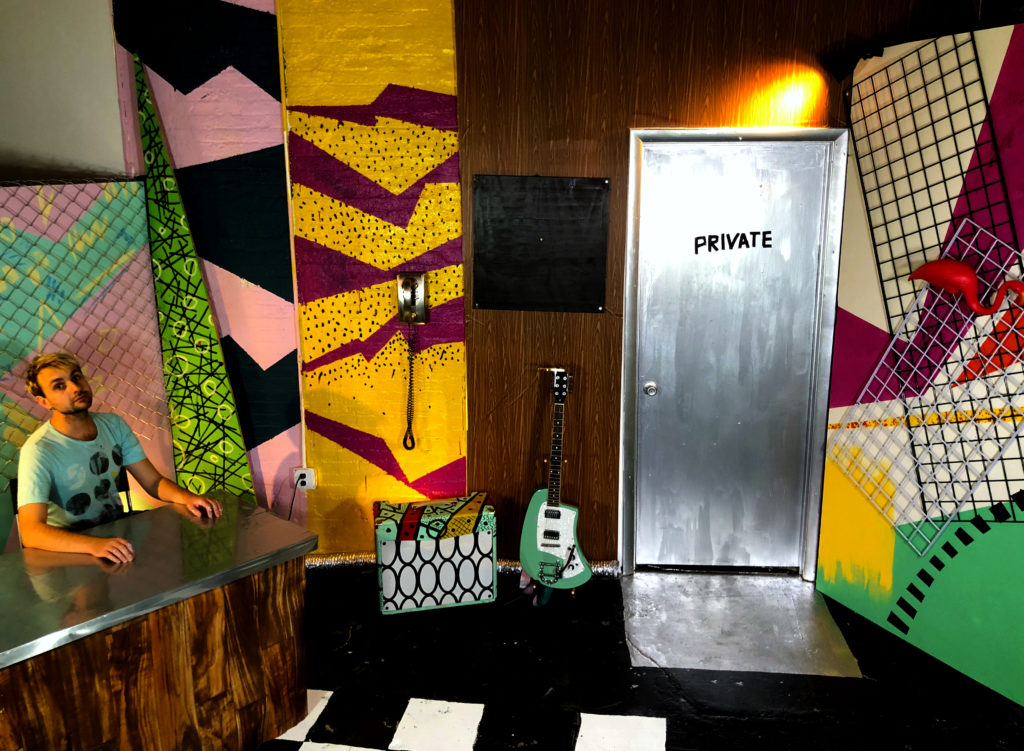 Pictured above: Frank Okay on the set of Earth Motel/Photo: Courtesy of Frank Okay

Frank Okay’s description on their website is a mouthful but speaks to the multitude of their work as an artist and creator. We first learned of Okay’s work through the DIY music and theater community. They designed and created posters that listed “living” and “dead” DIY venues around Chicago. The posters have since become a mainstay in the community.

They moved out to Baltimore with their fiancée in 2017,  after living exclusively in the Chicagoland area.

“It’s a really weird city,” Okay said of Baltimore. “It has a really strong personality. I’m a person who is really, really into cities and urban planning and new urbanism and all that stuff. (Baltimore) is a place with a very specific personality. A lot of times people will ask if Baltimore is like “The Wire” or a John Water movie and the truth, in my opinion, is that it’s both simultaneously.”

Okay spoke of the city’s eccentricity and the variety of people one can meet while traveling around Baltimore. They also mentioned how nice it was to live in a place where the cost of living is drastically less than Chicago, like the warehouse space and home they found, they found where  they could build something like a “13-foot tall painting.”

Having grown up in the Chicagoland area, it was an adjustment to move away because of how much they love Chicago. After 15 months in Baltimore, they are now returning home to Chicago. They will take on new projects and explore the possibilities of their old mainstay show. The Ghost Planet.

The DIY music scene will see Okay’s posters from time to time as it is a “passion” of theirs to create them.

Since they aren’t able to use the name The Ghost Planet anymore (The Ghost Planet, it turns out, is copywritten), Okay branched out with the idea to create something new.

“Our name is now Earth Motel,” they said. “We have an entirely new show that will live online.  We’re going to film that and when we get back to Chicago. We’llget a big space for the collective and do shows in the space. We’ll try to go to legit, 501c3 nonprofit status and produce something similar, but hopefully better than before.”

Earth Motel will star the same character from The Ghost Planet who got into some “intergalactic legal trouble” and was sent to a deserted planet. On this planet, they run an Earth-themed motel. Guests come and stay and do what they did before on The Ghost Planet.

Okay will be splitting their work time between their two great artistic passions: illustrating and creating their new show, which will be both “interesting and thought-provoking.”

For more information about Frank Okay and their work, visit their website at frankokay.com.