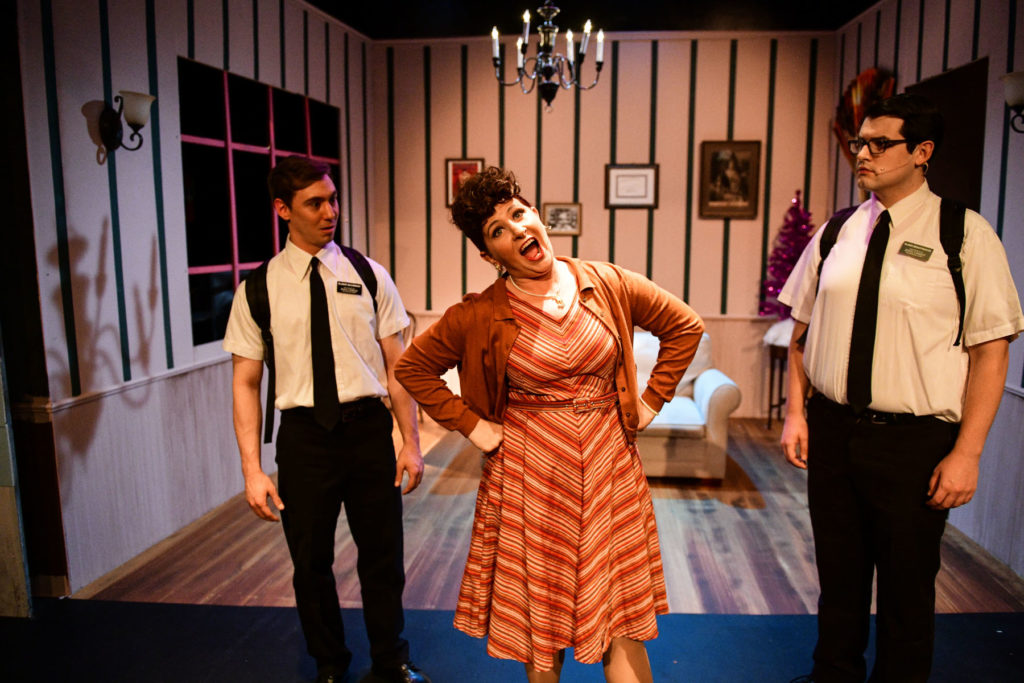 Queer And Camp: An Expression To Flying Elephant Productions’ The Book Of Merman

Editor’s Note: This is an expression by Zach Barr in response to Flying Elephant Productions’ The Book Of Merman, in the form of a cognitive journey; it is followed by information about the work.

Thank you for joining me here today.

I want you to begin by clearing your mind.

Like, really clear it. Blank slate, picture an empty stage.

No, you can keep your love for Ethel Merman. But clear the rest.

Okay, now I want you to consider the following words:

The Book of Merman.

The Book of Merman.

Now, without second guessing yourself, I want you to imagine there is a musical with this title. It’s 75 minutes long and has about a dozen or so songs in it. Just hold on that idea for a moment.

Okay, now I want you to answer this part out loud: What is the plot of the musical?

If you said “two Mormon missionaries knock on Ethel Merman’s door and then attempt to convert her,” congratulations, you’ve got yourself a basic plot.

Let’s keep going. What sort of music do you think the score consists of? Again, don’t overthink this. Just answer with the first response you have.

“Parodies of songs from The Book of Mormon and musicals that Ethel Merman was in?” That’s a very specific answer. Then again, what else could you expect from a concept like this?

Now, let’s talk about the Mormon missionary characters. Best guess: what are their personalities?

You’re describing the two leads from The Book of Mormon.

Well, that’s true, I did tell you to clear your mind. Fair.

All right, let’s dive a little deeper into this imagined show. It takes place in Ethel Merman’s living room. What does that design look like?

Excellent. And the orchestrations: how many instruments are in the pit?

Consider the costumes. Not for the Mormon missionaries, that’s obvious. For Merman herself. Describe, let’s say, two costumes for her.

A what? With what looks like a what on her head?

Okay, performances. How are the actors playing the three roles?

No, I would agree. You’d have to be a pretty strong performer to carry that amount of camp for over an hour. The Ethel impersonator is a shockingly strong imitation, right?

Well, we wouldn’t have it any other way, not in a play that has her name in the title.

Yes, yes. All of that is fine. You’re really making headway on this journey of the mind with me. Keep going.

Let’s do a rapid fire round. Yes or no only.

Is there a Christmas tree in the set?

Do the Mormons sing a song with a load of gay innuendo?

Are the Mormons able to adequately explain to Ethel Merman why they are here before the fourth musical number?

Is any explanation given for why Ethel Merman, who died in 1984, is alive and kicking in 2018?

Does that explanation satisfy, or does it excuse?

Is there a horrendously tone-deaf rap song shoved into the musical to appeal to the youths?

Will audiences who aren’t aware of Ethel Merman’s body of work find a modest thread of entertainment to follow in this show?

Now, production. How many men are working on this show?

No, you’re right, that is going to depend on production size. Let’s rephrase: what percentage of the team is female?

There we are. And who is directing the production?

And what is the other writer doing?

Ah, that would explain a lot.

Now, take a minute to let all of that sink in. Try to picture the project in its totality. All the elements discussed so far converging on stage together. What would the audience experience be? Who do you expect to see in the audience? How strong is the applause?

Wasn’t that a fun experiment? It’s like you were really there!

Can you imagine if a show like that actually existed? That’d be wild.

I’m sure there’d be small differences though. It would have to be at least slightly different from what you just imagined. Naturally.

Working at Scapi Magazine is an interesting experience, since we are never directly sent to plays without looking into them first. We receive a list of projects, research more about them and the artists involved, and then self-select to review them. This helps to avoid the issues that might arise if the editors were to send, say, a white male American-born critic to review a play about the Pan-African female experience. A lover of musical theater and heartfelt parody myself, The Book of Merman seemed like a show I might be able to offer my informed opinion on.

Still, a critic can pick the wrong show, and for me to review The Book of Merman in good earnest feels nearly as impossible as attempting to decipher the layered poetry of a hitherto unpublished work by Ntozake Shange. I can give the broad strokes of my personal experience, but for a more nuanced and useful critique, you’d have to turn to a critic with the right personal experiences.

I am not gay, and I am under the age of 40, and thus any words I could say against The Book of Merman and its paper-thin camp structure will simply be written off by the target demographic for the production. So, I will leave you with only this: does the idea of sitting down for 75 minutes at a show called The Book of Merman appeal to you? Whatever answer you give, you’re right.

The Book of Merman performs until January 6, 2019 at Stage 773, 1225 West Belmont Avenue. Tickets can be found at stage773.com, or by calling (773) 327-5252. More information on Flying Elephant Productions can be found at flyingelephantproductions.com.