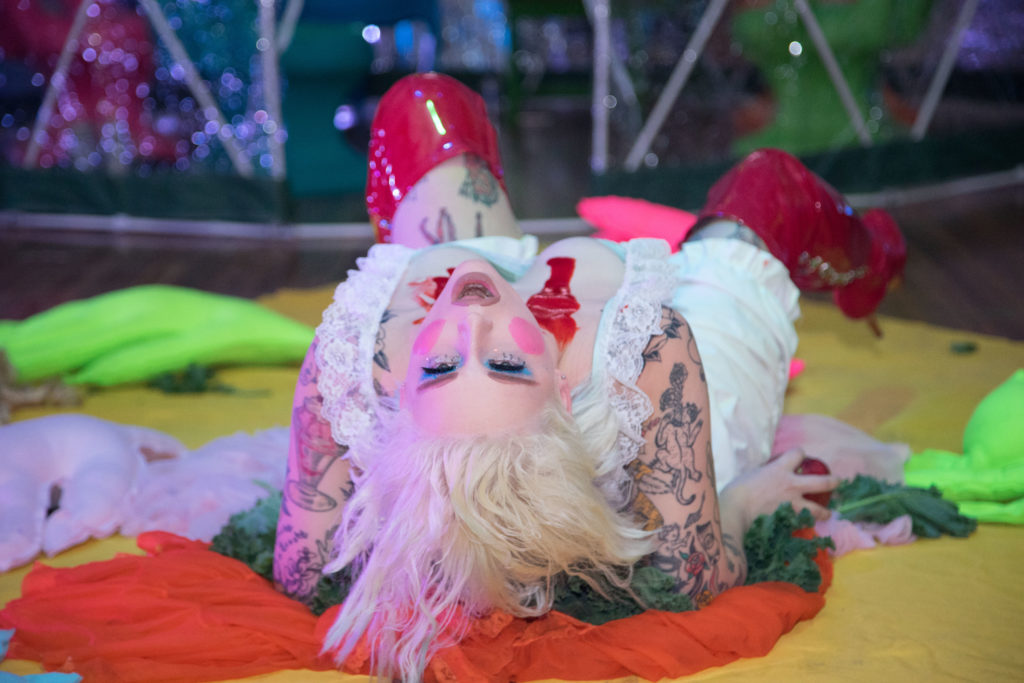 Glamour is a Spell: An Interview with Filmmaker and Drag Artist Molly Hewitt/Glamhag

What’s the origin story of Glamhag?

Hewitt: I came up with the name Glamhag maybe like seven years ago. I was reading this book—I don’t know how I got it, but in hindsight, it was probably a second-wave feminist book—and it was talking about the origin of the word “glamour” as a witch’s spell. It’s also often used to talk about vampires, but in this book, it was specifically about witches. The author was particularly focused on one spell, where witches would essentially castrate men and hang their penises in trees. So it was basically making this comparison, “The word glamour used to mean this and it was super empowering versus now, look at how it’s been reduced to something fickle that we see in magazines.”

At the time I was like “hell yeah,” but now I have a more complicated view of this. I’m less interested in castrating men and more interested in a non-binary future where nobody needs to be castrated. Also, I think glamour in fashion magazines is complicated—it’s something that can be powerful today—especially in drag culture—and also the power one can have over people using glamour, femininity, and beauty. But it can also be used to oppress women with super unrealistic body image standards. Also as much as everyone asks for it, the world hates femininity; that’s why it’s so dangerous for anyone—woman, man, non-binary—to walk out into the street wearing a dress and makeup. It suddenly puts you in harm’s way. The patriarchy views women’s bodies as objects and anyone else who isn’t “supposed” to be wearing those clothes is suddenly a threat to the patriarchy and fragile masculinity.

The book was also talking about how women and mythological figures, like crones and hags and spinsters, have a really negative connotation since they’re single, old women. If you’re a single, old woman, you don’t have any currency anymore in society, your expiration date has passed… And so, Glamhag was born.

Where does Molly end and Glamhag begin? Do you distinguish the work you do as one or the other?

Hewitt: Hm, that’s something I haven’t quite figured out yet. I think people often use drag to explore a free version of themselves—bigger, louder. But I feel pretty free in general and I haven’t really found that zone or transition. I’d say sometimes I feel like when I am performing, I’m Glamhag, and when I make other things, I’m Molly. But binaries suck in any way and I prefer to be fluid. I’m kind of just both whenever I feel it.

How do you define your aesthetic?

Hewitt: For some reason, I always have trouble answering this question! I guess a good anecdote would be—when I was making lots of ceramic sculptures, I really wanted long acrylic nails, but it makes it debilitating to sculpt. But one of the reasons why I enjoy indulging in femininity is because it’s like a challenge. The more constricting the skirt, the longer the hair, the higher the heels, the less hands you have for use, the more successfully feminine you are. Long nails are a self-imposed obstacle but you learn how to do everything anyway. So I got the long nails and it was really hard to make things—I was essentially destroying things as I created and everything looked very lumpy and distorted. Acrylic nails destroying everything with dried clay and blood in the nail beds is my aesthetic.

In the new Suspiria (which I highly recommend), Tilda Swinton’s character warns the protagonist by saying, “Don’t mistake weakness for artistic preference.” Is the nail story a cool conceptual idea or an excuse for me to spend money getting my nails done when I should have been learning how to make more structurally sound ceramics? Only I know the answer deep down in my soul, but it’s something to think about.

What do you draw from the worlds of queer club culture and drag?

Hewitt: I like how celebratory drag is (or is supposed to be), its play and celebration of femininity, sexuality, comedy. It allows anyone to explore a side of visual expression they might not try on a day to say basis. Same with Club Kid fashion. I want more club culture in the daytime, not just in the middle of the night. I also want it to not be at clubs with overpriced drinks and shitty sound systems. And I want queens and club kids to be making actual money for what they do.

Hewitt: It might seem like a crazy juxtaposition but they actually have a LOT in common. I think everyone is looking for something to believe in, opportunities to surrender, and ultimately, we are all just trying to feel better. BDSM is a chance to escape and play. It IS an alternative healing practice. Lemme tell ya how many dommes/tops feel like therapists… but subs are too. Whether you want to feel a sense of control or have someone tell you what to do. To serve or be served. Discipline, community, rules: these are all things people find salvation in in organized religion. I am very anti organized religion but pro spirituality and I think community is the most important thing for people to have access to.

You can catch Molly Hewitt/Glamhag in the act at ORDINARY PEEPHOLES at Beauty Bar, 1444 West Chicago Avenue, Chicago on December 17. Check out more of their work here.