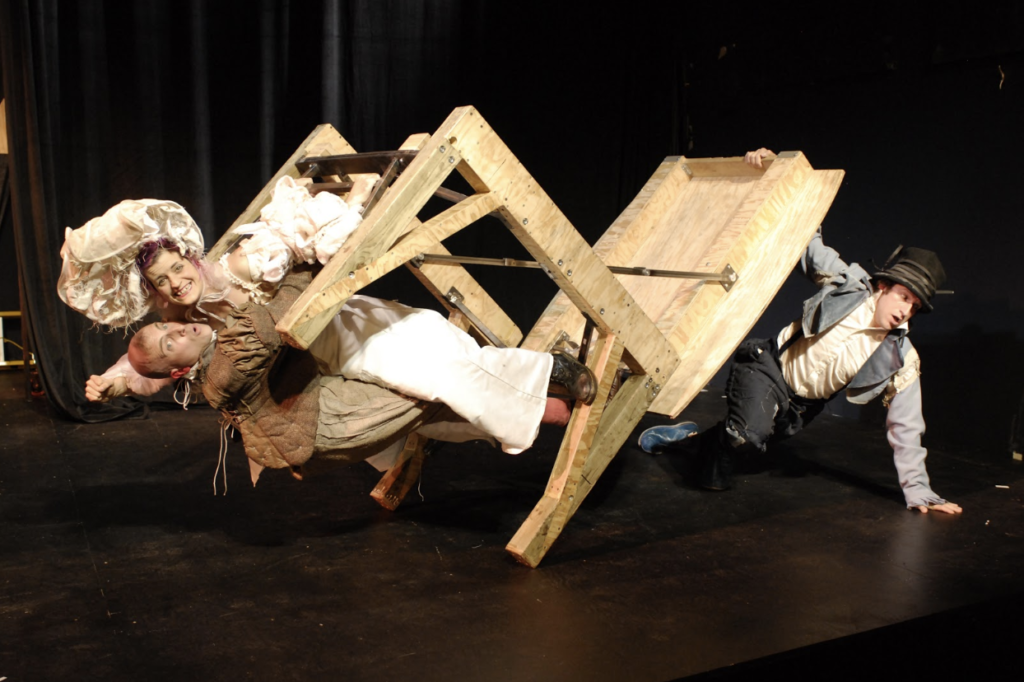 Makers and Breakers: Square Pegs in Round Holes: Following the Ghosts of 500 Clown

Pictured above: Paul Kalina, Molly Brennan, and Adrian Danzig in a production of 500 Clown Frankenstein/Photo: Provided by 500 Clown

Editor’s Note: This is the third installment of Makers and Breakers, Scapi Magazine’s monthly column about the history of experimental history in Chicago by our DIY theater and performance contributor Felix Abidor.

DIY theaters will always emerge in new directions and locations, so long as there is a new facet of the status quo to challenge. Yet, these theaters can only end in death. Some of those ends take the form of a stylistic death: alterations in the philosophy, style, or audience in the theater that renders it unrecognizable from its original iteration. Though Steppenwolf Theatre Company still exists, for example, it is hardly the Steppenwolf of John Malkovich that razed church basements throughout the 80s. Most of these theaters experience regular death: funds dry up, audiences get bored, founders move on.

Every experimental theater’s tale has an adversary—a force of routine and normalcy that the theater seeks to break. 500 Clowns was Steppenwolf, or rather, the style that Steppenwolf created. Following that theater company’s meteoric rise in the 1980s and 1990s, countless storefronts followed their example, producing gritty, but repetitive, “kitchen sink” work. Paul Kalina, one of the founders of 500 Clown, recounts seeing work he found predictable, boring, and—most damningly—safe.

The feeling drove him west to Humboldt County, California. There, tucked into a tiny town among the redwoods and cannabis farms, is the Dell’Arte International School of Physical Theater. Founded by Italian anarchist Carlo Mazzone Clementi in the 1970s, the school specializes in empowering individual actors to create their own work through a particular emphasis on popular theater forms like dell’arte, melodrama, and clown. After graduating from the program, Kalina moved to San Francisco where he worked as a street performer. While he recalls struggling to survive on the competitive and gritty San Francisco streets, Kalina credits those streets with imbuing his work with a sense of danger that strongly influenced his work in Chicago.

Upon his return to Chicago in the late 1990s, Kalina met Adrian Danzig, an alumnus of the Chicago Neo-Futurists, through an audition for the Big Apple Circus Clown Care Unit. Danzig had created a dog routine involving a dog skeleton. The two, along with fellow founder David Engel—who met Kalina in college—shared a desire to create dangerous theater, just like the kind Kalina saw on the streets of San Francisco. Together they resolved to develop a project—not a theater company—to explore the tenets of action, risk, audience, and humor.

They settled upon a telling of Macbeth, exploring how clowns would respond to the superstition surrounding that show. They initially wanted to use five clowns but since they could not get the final two performers, they settled for three. They called it 500 Clown Macbeth. In explaining the name, Paul remarked: “Five clown, what esoteric thing is that? 5000, well that’s just absurd, but 500? Possible, crazy. What the Hell could that be?”

Performing in a converted bowling alley, the performance involved raw meat, a fashion show, and a collapsing scaffold. Their first audience had six people in it. Their sixth had 143. From the perspective of the audience, their project was a success.

Following their initial set of performances, Danzig and Kalina resolved to continue exploring the Macbeth story. Engel dropped out, citing exhaustion with the work and they filled his spot with Molly Brennan. The three formed the core of the group for most of its life. The three continued exploring Macbeth for several more years, then explored a clown retelling of Frankenstein, then a Christmas story. Wearing red ears—a play on the expectation that clowns should wear red noses—the group created five theater pieces over the set of ten years and performed everywhere, from clown festivals to Steppenwolf, from Chicago to England.

The reception was avowedly love-hate. Though the group survived in its original form for nearly a decade, it frequently ran against the grain of what traditional theater groups did in the city. In a city full of kitchen-sinks, the group’s emphasis on physical comedy and clown was obviously a point apart.

More importantly, though, was its emphasis on process over result. In keeping to the original ethos of the group as a single experiment, the performances themselves were more tools to help develop the piece further. The audience were partners in reflecting what they saw the piece to be, how they understood its meaning and provenance. They continued developing pieces long after the original showing, thus explaining how the group only created five pieces over ten years.

The most remarkable aspect of the 500 Clown process, however, may have been its intensity. Clown is notoriously vulnerable, and the lines between the personal and the professional in the group blurred. The emotional life of the performers was consistently on the surface in the performances themselves. Fights between actors that occurred moments before the piece could have a profound effect on the performance itself. The group operated intensely, similar to a rock band

Given the intensity of the group, its end seemed pre-ordained. For all the wonderful qualities of rock bands, longevity is not often one of them. The relationships grow too fraught to remain workable. It is perhaps why Rod Stewart still performs in Las Vegas but AC/DC does not.

Interpersonal squabbles, however, belie a more optimistic reason for the group’s demise: the members moved on. As people change and develop new artistic sensibilities, it becomes harder to maintain a style they had developed a decade earlier. The resumes of the founders seem to bear this reality out. Paul Kalina is now a professor at the University of Iowa. Adrian and Molly remain active in the Chicago theater scene. Alas, the group indeed ended.

With the life and demise of 500 Clown established, it is valuable for us to consider what value the group had in its existence. Certainly the fact that this article is worth writing nearly a decade after the group last produced new work implies some provenance.

Indeed, 500 Clown formed a fulcrum around which the New Work community turned. Stylistically, the group influenced plenty of artists within the area. Kalina refers to Leah Urzendowski, who joined the group in its later years, as someone whose artistic practice was influenced by the work that she saw and practiced within the company. One can take the example of Leah Urzendowski. From an early age, Urzendowski struggled to fit within the ingenue mold set out for most female actors. Through Danzig, her professor, she began working with 500 Clown, first as a box office and tech assistant, eventually as Molly Brennan’s understudy. Through the group she came to develop a style of performance that brought out her more genuine qualities — qualities best expressed through clown. One can likely find any number of people who were also affected by the work of this group,

Beyond impacts upon artists, the group impacted the reputation of the city. Take Marc Frost for example.: 10 years ago, the future Artistic Director of Theater Unspeakable and co-curator of the Chicago Physical Theatre Festival was studying in England. Even there, he heard about 500 Clown and their work. As a result, when he was deciding where to build his career post-graduate school, he considered Chicago a place where physical theater was and is made.

For people to consider the possibility for physicality in Chicago, despite that city’s reputation as a talking-head improv purgatory, is no small feat, and it is not just Marc Frost. Today, you can’t toss a stone without hitting a company involved with physical theater or devising: Rough House, Walkabout, Manual Cinema, Forks and Hope, and perhaps more of which this author has not yet learned.

It is impossible to say whether each of those theater companies is actively following the example of 500 Clown. In fact, it is likely some have never heard of the organization—10 years is a long time. Yet, it is undeniable that the work of 500 Clown expanded the possibility of the theater that can be created in this city. They opened the possibility that small, intense, physical clowning can be a staple of the new work movement.

In a Judeo-Christian worldview, death is a harsh proposition. The possibility of ceasing to exist, erasing any evidence of having been here is understandably terrifying. Fortunately, in art—as in life—it simply isn’t true. Every theater company that has passed through the city has existed. Some do not make work anymore. Some make work that is so different from what they originally made that they are the same theater in name only.

When we make theater in this city, it is important to be aware and honor the thousands of theater makers that have come before us, that have opened and closed doors on the type of work that will work in this city, that have taken the risks that we consider mundane now. 500 Clown was one of those companies, and we will always live in the shadow of the moment that they were here.

Tune in next month for another Chicago experimental history column by our DIY theater and performance contributor Felix Abidor.