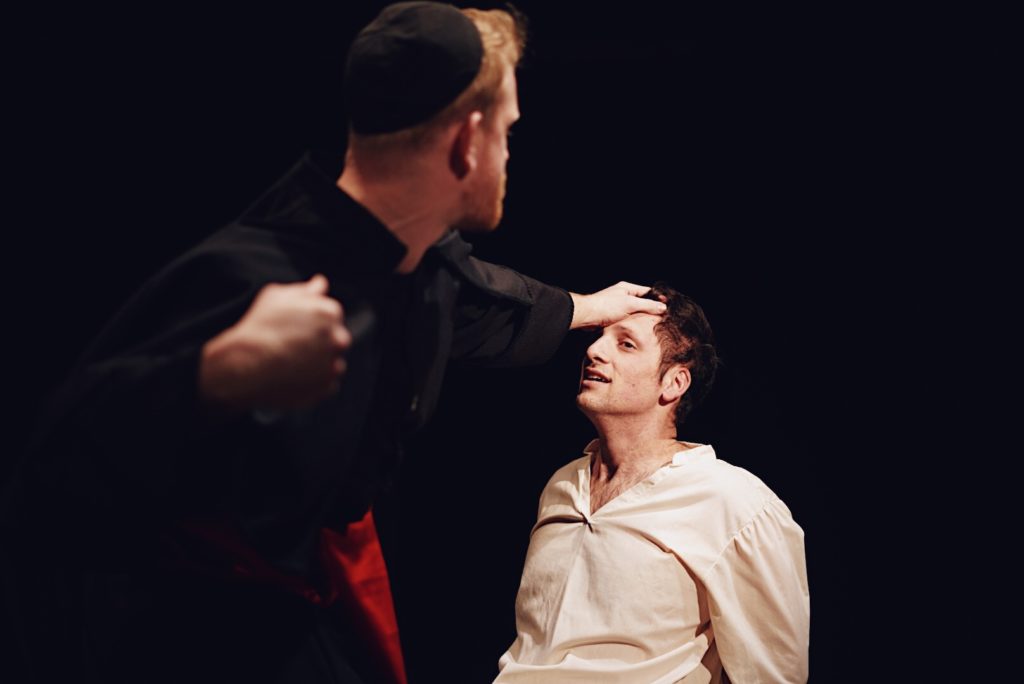 Editor’s Note: This is an expression by Aliza Feder in response to Infinity Burns in the form of a satirical eulogy; it is followed by information about the work and process.

Infinity Burns is the story of a 17th-century monk sentenced to death for his radical beliefs in an infinite universe, and his attempts to convince his accusers that his revelations are valid. Below you will find a eulogy written in his honor, or something of the sort.

We are gathered here today in memory of our (cough) beloved Franciscan brother Giordano Bruno. Brother Bruno perished in righteous cleansing flames last Wednesday when we burnt him at the stake for making us feel uncomfortable.

Bruno fell afoul of the Catholic church for his belief in an infinite universe. He posited that our reality as we know it (including the church) was merely a spec in God’s infinite sea. This was not received well. Indeed, he was run out of five different countries for preaching this heresy and eventually attracted the attention of the inquisition.

But let us remember Brother Bruno in his prime: namely, the seven days leading up to his execution during which we beat the shit out of him in his dungeon cell.

Bruno’s last days came to pass in a palette of red and black. He was gently encouraged via torture and intimidation to recant his blasphemous beliefs by Cardinals Borghese and Bellarmine. These final days were a dynamic combination of fraught dialogue and ensemble-devised movement.

Father Bruno was often visited by God, whom he experienced as a woman in a flouncy red jumpsuit with a killer fascinator. And God saw fit to call herself Hermes, and they were great chums. Hermes pushed Bruno to be steadfast in his beliefs, and to meet his death bravely and with conviction.

For a brief moment in time, Bruno did trick our colleague Cardinal Bellarmine into experiencing his vision of this infinite universe.  The crafty rascal somehow got Bellarmine to reach out and touch infinity for himself, which resulted in him dancing wildly and contorting his body in the resonance of his own name. And so it came to pass that Bruno was clearly the poster child for heresy, and killing him was in the best interest of the Church and its people.

And now, for the Eucharist, which, in honor of the extremely sassy dialogue that came to pass between him and his torturers in his final days, will be a ginger snap. We like to have fun here.

It is presented as a part of Rhinofest, or The Rhinoceros Theater Festival, which is now in its 31st year of experimental and fringe performance. Like the other performances within Rhinofest, Infinity Burns presents another example of the scrappy and formidable nature of Chicago theater artists.

Infinity Burns performances occur on Wednesdays through February 20 at 7:00 PM as part of Rhinofest at the Prop Thtr, 3502 N. Elston. More information can be found at rhinofest.com/infinity-burns.