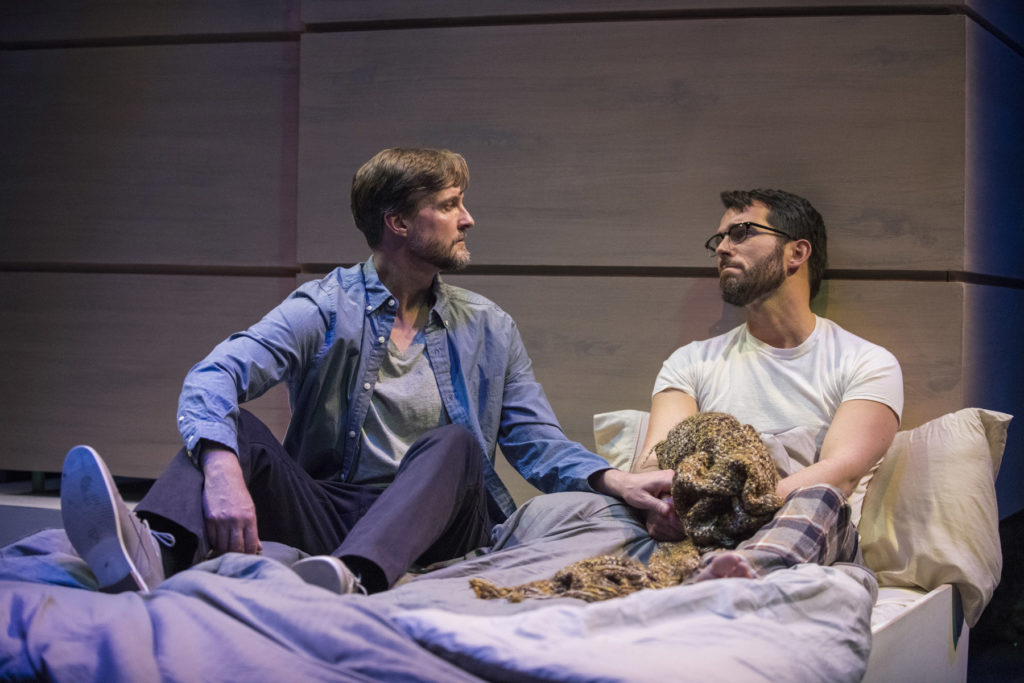 Alan, played by Bruch Thomas Reed, tells Jason, played by Shane Kenyon, that he is playing the “role of a parent.” Jason reacts with surprise to the word ‘role,’ but I think it is perfectly accurate. Being a parent is an aspect of your identity but it can also feel like a ‘role’. We look for role models when entering new parts of our lives, and there are only a handful of examples of queer parents. In the past 15 years or so, this has begun to change with the success of mainstream media like television programs Six Feet Under, The Fosters,  Modern Family, The New Normal, and certain characters’ storylines in Glee, Grey’s Anatomy, and Queer as Folk. This is still a new phenomenon in mainstream television and it took until 2003 for Queer as Folk’s Michael and Ben to become fathers.

Later to come to prominence is children’s media about queer parenting. The first lesbian couple on Disney Channel was in 2014 and two years later Nickelodeon followed with a gay couple appearing on Loud Mouth. In 2015 one of the main characters of the Captain Underpants children’s books grows up to marry a man with whom he has  a child. Peter Parnell actually wrote a children’s book himself with Justin Richardson titled And Tango Makes Three about the true story of a same-sex penguin mating pair who raised a child. In television, these stories are marginal and receive backlash, and there is lots of room for improvement in the depiction of families.

As queer people, I think we pay special attention to our upbringing and relationships with our parents, which could weigh on someone when those roles are reversed. I remember early on in my life promising myself that I would not raise my children the way my parents raised me. Bad parenting is bad parenting regardless of sexual identity, but I think there is added pressure from the outside world on queer parents to be perfect parents. If a single gay couple exhibits bad parenting, it could be spun by homophobic and/or anti-queer people to invalidate any gay couples from having children.

Does queer parenting need to look like straight parenting? This is a topic that comes up less often in Dada Woof Papa Hot but is addressed a couple of times. For Alan and Rob it is also tied up into ideas about class. They want the best opportunities for their daughter, but argue about whether those can be done in private or public schools. They also argue if that debate is more about status and trying to attain a level of acceptance by their straight peers than about their daughter’s well-being.

When I look towards my own future, I feel a certain amount of pressure to be a radical parent with my own future children. Since just having children as a gay man is a political act in and of itself, I think about what that act means. We are entering an era where non-gendered parenting is becoming a lot more acceptable and common. I still worry about conflict with the gender binary as children enter schools where their gender identity might impact the kinds of activities and roles they are encouraged, or allowed, to pursue. Queer parenting also requires a lot more planning than straight parenting does. We do not have the luxury of accidental pregnancies. We have to decide on methods: surrogacy can cost between $76-146,500, and adoption can come with wait times and other difficulties.

While a narrow focus made Dada Woof Papa Hot a concise story, I do think it falls short in two important aspects that affect its conversation about parenting in the late 2010’s. Firstly, it is a play about a cis, white, gay couple who mostly interact with other cis, white people. There are two black characters in the play, but they are definitely secondary characters. Neesha Powell’s article for Everydayfeminism.com is a deeper discussion of the politics of race, gender, class, and parenting that Dada Woof Papa Hot begins.

Secondly, ‘traditional’ monogamous marriages are the end-all-be-all of the relationships in this play.  Scott, played by Jos N. Banks, and Jason do have a partially open marriage in the play, but Scott only allowed it to convince Jason to have a child with him. This arrangement eventually destroys their marriage. While there is not a lot of empirical data about non-monogamous and poly relationships, what data does exist indicates that these arrangements can be beneficial to the partners and also the children in these relationships. What makes Scott and Jason’s marriage crumble is not the non-monogamy, but that both partners were not enthusiastically consenting to the arrangement. Scott wanted a monogamous marriage and Jason did not. Scott was left feeling jealous and Jason felt trapped and guilty.  I think the play could have taken its story a step further if it had let Scott and Jason have a healthier non-monogamous relationship.

At writing, I have not heard of any other performances about queer parenting in the Chicago area, and this continues to be an important and underserved story. If there are performances I have missed, please point me towards them.

About Face Theatre’s production of Dada Woof Papa Hot is a seamless theatrical experience, not to be missed, and a valuable part of our culture’s ongoing conversation about parenting, queer parenting, and the future of the family.