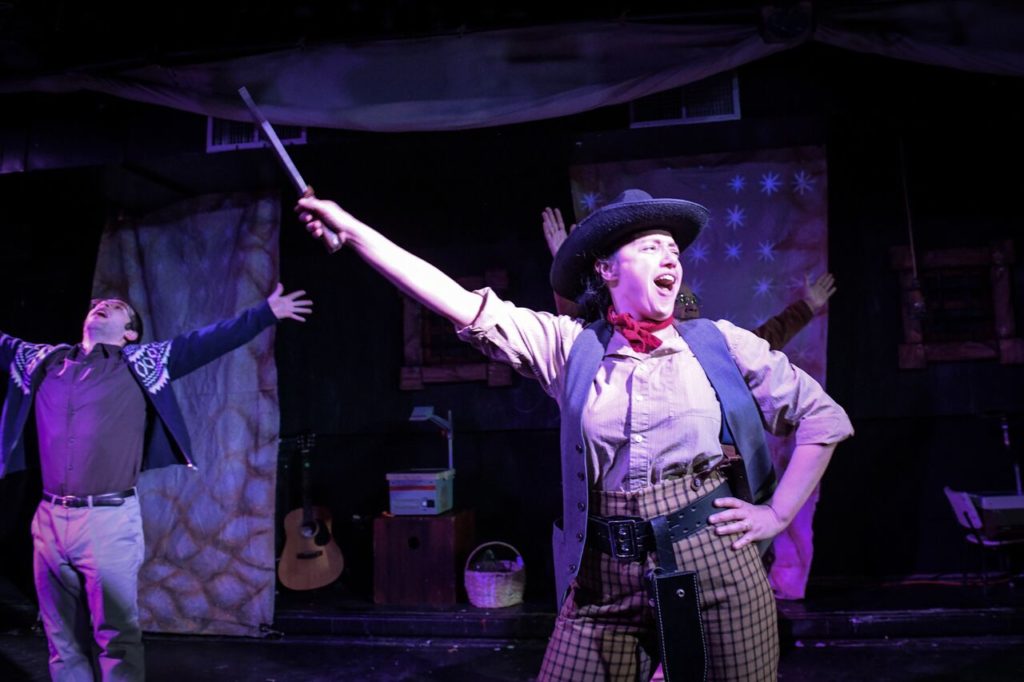 Pictured above: Nancy Casas in Remember the Alamo/Photo: Evan Hanover

It’s presentation day at the Neo-Futurist School for Wild Productivity, and today’s topic: the Alamo. No, wait… historical dioramas. Sorry, no… Bring-Your-Knife-to-School Day… Wait! It’s the British invasion of the ! In a space decorated with the charm and creative flair of a middle school classroom, the audience is invited to partake in one of the most memorable moments in States and Mexican history: The mighty battle of the Alamo.

Which everyone knows the story behind, right?

Nick Hart (writer) and Kurt Chiang (director) have teamed up to devise a piece that forces you to ask yourself if you truly remember the Alamo and, if you do… for what purpose? Nick greets the audience unabashadley underdressed, sketching out the plans for his 13-day reenactment of the battle of the Alamo. He invites his good friends Steve (Mosqueda), Hal (Baum), Brenda (Arellano), and Nancy (Casas) to join him in a week of waiting. Waiting for a sign, or an ambush, or for Phil Collins’ latest single to drop on the British Top 40. Over the course of 90 minutes, we explore Nick’s journey as his band of rabble-rousers take on pinnacle personas from the 1836 stand-off.

At a glance, there is a simple connection between the selfish battle waged 200 years ago and the one being waged 24/7 today. Hart’s piece, however, has little to do with our media-fueled Wall Blitz. Instead, Hart sinks his hands into each side of the sandpit and plays in the dirt, exchanging silt for clay as he plays. I was forced to remember that the proposed barrier has implications far simpler than immigration policy and import traffic; when you build the Wall, you also get to build a narrative about the people who will be on either side of the Wall.

The show also reminds us that history, like most other things, can be purchased with enough money and lack of melanin. This melancholy reality is personified cheekily, a bitter reminder that these ‘antiquers’ claim ownership to both the antique and its origin. After all, history is written by the victorious, and who is more victorious than the greedy? Collectors with enough money to purchase pieces of such history have the tendency to destroy the flesh and bone that made those moments happen. By utilizing the Alamo as a graspable, marketable, and infamous moment in Hart’s own diverse history, the audience is forced to realize that this journey of self-discovery is happening, regardless of who’s building what where.

Hart and Chiang use the play as a vehicle to reclaim the story, to remind us that people are grown from the lands they walked on yesterday or centuries past. Hart’s words also remind us that as we grow, we forget to look down and get to know our roots. Nick’s struggle to be the hero in his own narrative is made clear when he can’t clearly define what he is. The list of identifiers ranges from omelet-eater to feathered-snake man… or was it snake-eater and omelet man. Regardless of the order, the countless ways in which our friends in the show attempt to make space for their identities are varied and exciting to walk through.

The true charm that supersedes the show is that, despite the multitudes of lights of sounds you are drinking in, this show is, at its core, deeply personal and deliciously selfish. Hart is diligent in his effort to make the story completely his own and refuses to relinquish the reins. His fellow players do their best to emulate a similar tone; each character takes joy in relishing the audience with personal anecdotes, sharing aged stories, memories, and exploring those implications along with us. Wrought with delightful nostalgia and subjective opinions, the audience gets the opportunity to see a piece that is indulgent of the creative team’s talents, showcasing the true depths that the mind dives into when asking the age-old question; who am I? In some cases, you are the knife that James Bowie carries with tenderness and affection. In others, you are the bear wandering confidently through the wilderness. In more, still, you are the unlucky son-of-a-gun with egg on his face.

The lesson you glean? ‘Who am I’ is not as easy as it sounds. It makes you wonder why teachers trusted small children with such a big question. Why did they have you craft together paper and cardboard to tell the class you are a big sister? Why did they ask you to define your heritage when you could barely tie your own shoes? Hart and Chiang’s work seeks to prove that people still haven’t even got that down yet.

Remember the Alamo plays every Thursday, Friday, and Saturday starting March 4 and closing on April 27 at 7:30 PM. Thursday evening performances are Pay What You Can evenings, and tickets for Friday/Saturday performances are $25. Tickets can be purchased at neofuturists.secure.force.com/ticket. Questions or concerns can be directed to the Neo-Futurist main phone line (773) 878-4557.