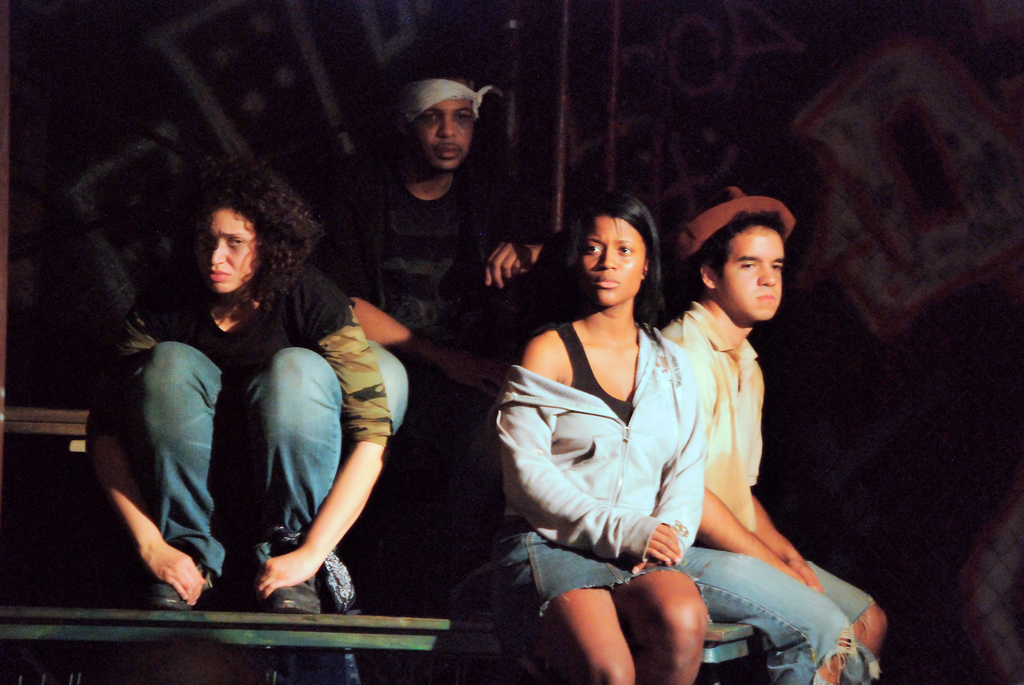 Makers and Breakers: Preserving the Voice of Humboldt Park: A History of Urban Theater Company

Editor’s Note: This is the fourth installment of Makers and Breakers, Scapi Magazine’s regularly occurring column about the history of experimental history in Chicago by our DIY theater and performance contributor Felix Abidor.

Experimental theater has been instrumental in expanding the scope and accessibility of theater within the city. However, when we consider that movement, we find it to be both geographically and ethnically confined. Most of the great DIY houses are limited to the North Side, specifically along the Red and Blue lines. Most of the great DIY houses continue to make theater by and for white people.

There are, however, exceptions: theaters that utilize DIY’s democratizing precepts to create art for those who would otherwise not experience it. This piece will examine one of the great success stories of that movement: The UrbanTheater Company (UTC).

Operating continuously for nearly 14 years now, UTC has grown into one of the premier voices of the Latinx community in Humboldt Park. This piece will examine that community and how the theater has develope dto represent them.

Any appreciation of the UTC requires an examination of the community which they serve: the Boriqua. Among the major movements of people into the continental United States, the Puerto Rican migration is a relatively recent phenomenon.

As recently as 60 years ago, the Puerto Rican population in Chicago numbered in the low-hundreds. Throughout the 1950s and 1960s, however, thousands travelled from the island seeking—as many migrants and immigrants do—better opportunities and a better life for their families. In doing so, they followed the path well-trod in decades past by Irish, German, Eastern European, and Jewish immigrants.

The ethnic environment in the city proved hostile hostile to the new immigrants. Chicago is—and has been—a profoundly segregated city.[1] Even in the 1950s (perhaps especially in the 1950s) the dynamics of ethnic movement mirrored those that we recognize today: poor immigrants move into the spaces previously inhabited by old business or whites in flight, then live there until they are forced out by gentrification. The Puerto Rican experience is no different.

Initially, the mission of UTC was to represent the voice of this burgeoning community.. At the time of its founding by artists Madrid St. Angelo, Marilyn Camacho, and Ivan Vega (2005), there were significantly fewer Latinx theater organizations in the city. Those that existed had existing ensembles, so breaking into the theater world—always a difficult prospect—proved especially forbidding. As a reflection of the underrepresentation the company sought to remedy, their opening performance had to be a Puerto Rican playwright from New York. His was the best Puerto Rican voice available.

Initially reactions to the work were mixed. While there was broad excitement for the prospect of a Latinx professional theater, expanding audiences proved a challenge. According to UTC founder Vega, a broad subset of the population of Humboldt Park saw the work the theater was doing and assumed that it was not for them. Such a misconception—the source of the divide between theatre and the public—leads to a familiar crossroads in the life of a small theatre. Does the theater shun the public by performing increasingly obscure and impenetrable works, or does the theater surrender artistic integrity and compromise into a long-dark night filled with endless reruns of West Side Story?[2]

UTC did neither. Operating with the intention to serve others within their community, the company sought to be not a community theater but a small professional company that attracts people to Humboldt Park. Their secret seems to have been in a savvy marketing strategy that integrates them with other small local business. As part of their Teatro Thursdays and Teatro Sundays programming, they partner with restaurants in the community to sell packages that include meals and shows. They strategically select restaurants that will most benefit from the arrangement. For example, a recent Teatro Thursday partnered with La Bruquena, a family-owned restaurant that has been serving authentic Puerto Rican cuisine for over 65 years. The arrangement reflects a style of hospitality co-founder Vega regards as Puerto Rican. The company takes care of its audiences and members of the community that come to visit.

As a result of their hospitality, UTC has become an attraction not only for theater practitioners, but also for lay members of the community. Spreading by website, Facebook, and word of mouth, the theater reaches people all across the city. Many are first-timers to UTC; many are first timers to theater in general. Perhaps the miracle of UTC is that it has found the way to thread the needle: to become a small-scale theater that produces work of artistic merit for the average member of the public.

After nearly 14 years in operation, UTC is one of the more established storefronts in the city, an elder statesman. With their reputation and clout, they have begun to hone in on the politics of whom they represent. Puerto Ricans are not a monolith. Their experience in Chicago is different from New York, West Town different from Humboldt Park. At the same time, within the Latinx community, there are shared experiences that come from inhabiting the same spaces. The original plays that UTC produced, written by New York playwrights, were stories with resonance in the community, but their essence was East-coast, removed from the Chicago experience.
So, UTC has invested in the telling of stories unique to Chicago. Beginning last year with their production of La Gringa (a benefit performance for the recovery efforts from Hurricane Maria), they have invested in Chicago playwrights. That work has continued this year with the workshops and performances for the play Not For Sale, a story that takes place entirely within Humboldt Park. UTC has specified their mission to solely focus on this area. While the company is committed to preserving the Puerto Rican voice, the stories they tell do not need to be Puerto Rican in nature. They simply need to tell the story of Chicago—in particular, to tell the story of Humboldt Park.

Tune in next month for another Chicago experimental history column by our DIY theater and performance contributor Felix Abidor.

[1] The writer of this piece understands that many might react to this statement with shock. Please take deep breaths.

[2] In related news, West Side Story is now playing at the Chicago Lyric Opera. Get your tickets now!