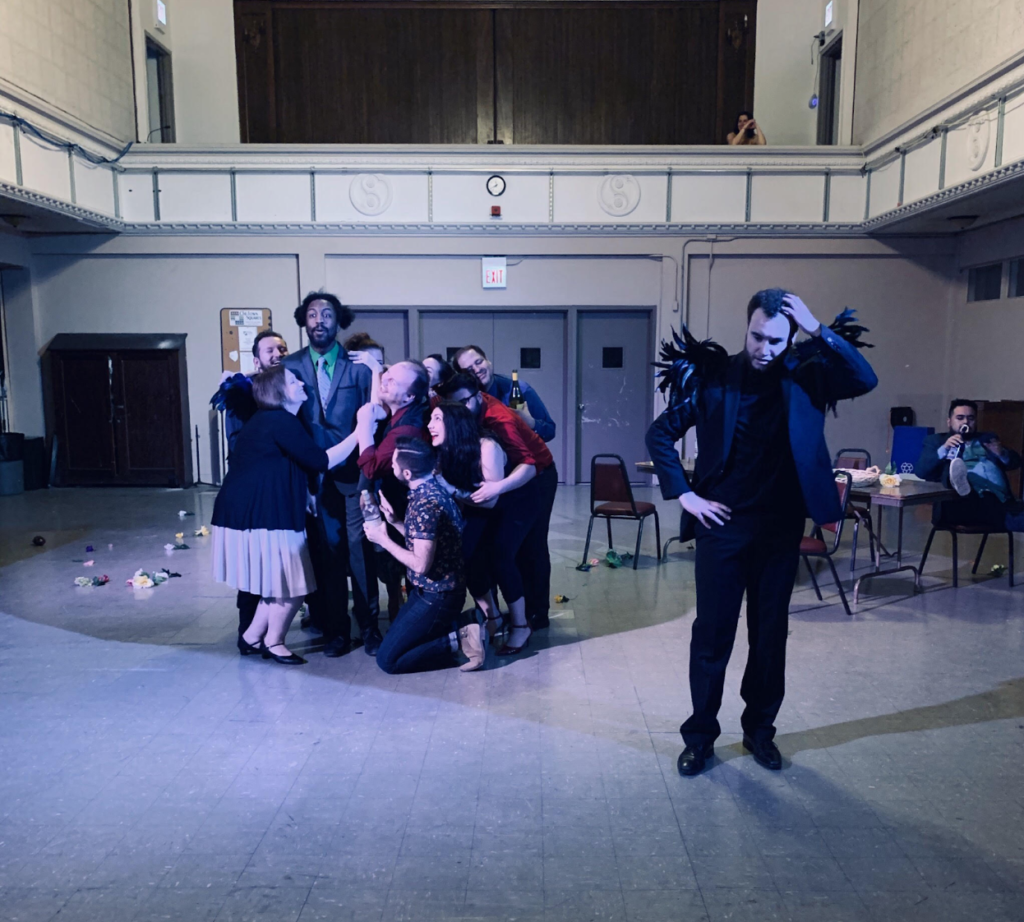 On the second floor of Ebenezer Lutheran Church, there is an airy auditorium with bare-bones lighting and steps leading to a stage at the west end. When I walked in on the afternoon of April 7, it had rows of chairs in the middle facing east towards a set with long dining table, chairs, and cabinet. Behind the row of chairs on the stage was a second set with a bed as the centerpiece. I was there to watch New Moon Opera Company’s billing of Il Campanello by Gaetano Donizetti and Gianni Schicchi by Giacomo Puccini. The short operas focus on a wedding and a funeral, respectively, paired purposefully to focus on life’s beginnings and endings.

Opera faces a perception problem—real or unsubstantiated—of elitism. The Lyric Opera House charges hundreds of dollars for tickets, which precludes most people from attending, and audience members are generally from the upper class and dress accordingly, which can further ostracize opera newcomers. New Moon’s mission is to “bring opera in a fun, accessible way,” and tickets for the show ranged from $12.50 to $23. The company also provides industry discounts.

Director Jennifer Cox staged fantastically physical productions of the double bill. In opposition to the famous “park and bark” opera style, both of these operas had dancing, jumping, and fight scenes. In Il Campanello, Enrico and Serafina faced off and ran circles around the dining table, Serafina hurling plates and baskets of fruit at her former lover. Gianni Schicchi was staged on the steps, with most of the cast going up and down the stairs throughout the opera as well as walking through the audience. The result was that singers were vocal athletes, combining impressive vocals and physical comedy into compelling performances. For the opera novice the physicality of the shows hooks you in and allows you to immerse yourself in the singing.

This was New Moon’s first time performing in Ebenezer, but they have performed in other venues such as United Methodist Church in Lincoln Square and Next Door Theatre. Watching opera in a smaller venue, as compared to traditional opera houses, creates an intimate atmosphere in which you can connect with the performers. Instead of nosebleed seats, audiences sit anywhere from 20 to 100 feet from the singers, providing unprecedented access to the performers.

This particular production had the audience switch seats from east to west during the intermission, which not only was a unique use of the space, but also created a more equitable seating arrangement. Those who were in the last row for the first half were able to sit in the first row for the second half, which had an equitable effect on the audience experience.

Jen Barrett, marketing director at New Moon, describes the company as part of the storefront opera community in Chicago, specializing in “a lot of these two short operas.”

“Our mission is to bring opera in a fun, accessible way,” Barrett reiterated, then continued. “And sometimes to a new opera-goer, these longer shows are intimidating. A lot of our shows are lighter concepts. Sometimes we did English dialogue with original language for songs with subtitles. I really like the double bill idea because you get one show, and then you get a break, and you get another. We have found that audiences really enjoyed it.”

The cast of the double bill was very diverse, a refreshing progression for an art form that was development in imperial European nations. This is attributed in part to the unique casting process that they used for this season. Barrett describes their new casting process as driven by the desire to “to see what kind of pool of people would be interested in working with us.”

From their initial auditions they curated their season, which included a 5th Anniversary celebration in September and La Nuit D’Épouvante: Night of Terror in October.

New Moon is also open to switching up the traditional process of strict gender casting, which highlights the trend in opera where “roles can be changed and bent. Instead of relying on gender to determine who gets what part, it allows you for freedom to look at the list [of talent]. You can take a soprano and potentially put them in a tenor role.” In Gianni Schicchi, they switched Gherardo to Gherarda, with Jessica Oliver in the role. Oliver “has an amazing range and she was flexible and willing to step outside of the box.”

New Moon Opera operates under the umbrella of teamwork.

“When we hold auditions we let artists know that we’re collaborative,” Barret expanded. “They help with set strike, costumes, painting, scenery, they help us find props, and marketing. We feed off of their talents and abilities. There’s a lot of great companies that do that. The storefront operas always tries to do that; we do everything on a limited budget and resources.”

The double bill of Il Campanello and Gianni Schicchi was their final performance of this season. Vox 3 Collective will be featuring some of the Il Campanello and Gianni Schicchi cast in Breaking Down Walls on May 3 at 8 PM at Lake View Presbyterian Church, 716 West Addison Street. New Moon’s next season will begin in August or September. More information on their work can be found here.