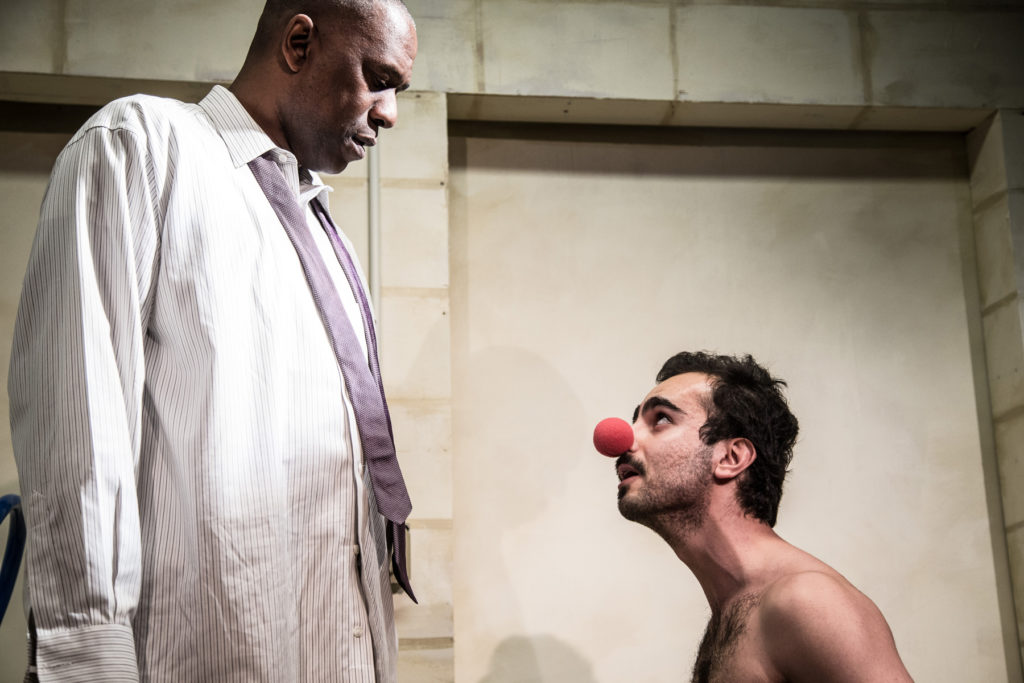 On the second floor of the Den Theatre, a hub for storefront shows in Wicker Park, Broken Nose Theatre has made Theatre 2A its home. I went to see Language Rooms, a play by Yussef El Guindi, a darkly comic play set in an American enhanced interrogation center.

The play opens with two coworkers at the facility discussing how Ahmed fits in– or rather, does not fit in– with the rest of the interrogators. Nasser, tall and popular, is chastising Ahmed for seeming odd and not even watching the Superbowl with the rest of the team. There’s an odd Jim and Dwight dynamic immediately established between Ahmed and Nasser juxtaposing mundane coworker dynamics with the horror of working in a torture facility.

Ahmed (played by Salar Ardebili) is an interrogator because he speaks Arabic. Set during the height of the War on Terror, Ahmed and Nasser grapple with questions of what it means to be a patriot as well as inquiries from their direct supervisor, Kevin, a charming but unsettling character. These scenes are intercut with monologues from Samir, an immigrant from Egypt who wins a visa to America in a lottery and moves his entire family in search of a better life.

Kaiser Ahmed guest-directed the play for Broken Nose Theatre, a storefront company that is pay-what-you-can. Artistic Director Elise Davis said that this model evolved from having pay-what-you-can previews into a full-blown mission statement after the company reassessed its direction in the second season. Davis noted that once they implemented this policy, their audience numbers went up.

“We had so many people come up and say, ‘thank you so much for letting me see this show for $5.’” Davis said.

Conversely, when people realize that this is a community benefit, those who are able feel compelled to give a donation, creating a meaningful interaction between the audience and the company.

Davis emphasized that they are also seeking to “destigmatize [the correlation] that the price of the ticket indicates the value of the show. People are able to see amazing theatre and not break the bank.”

Jen Poulin, the Development Director, found the play at the back of a playbook and the company fell in love with the script. Since most of the company’s directors are white, they sought a director of color who would be able to give the proper context and direction for the production. Three of the four characters are Muslim, who are either working or being held at the enhanced interrogation facility at an undisclosed location. The company was familiar with Kaiser Ahmed’s work and Ahmed was a fan of the playwright.

In order to prepare for the show, Ahmed had several conversations with El Guindi about the tone of the show, “a cross between 1984 and The Office,” and rehearsed with the actors for four weeks.

The set was barebones and emphasized the banality of the work environment that 3 of the 4 main characters were in. Although they are there to torture people, they are still employees and feel the forces of bureaucracy and middle management. After all, work is still work. Ahmed’s directorial choices emphasized the tediousness of the office with the character wearing business attire, ironing clothes, and sorting through paperwork. The play deftly makes the abnormal and abhorrent seem normal and tedious.

Ahmed is questioned by his boss Kevin, played by Bradford Stevens, who is a disarming and manipulating presence, testing Ahmed’s faithfulness to the U.S. and making him prove it to the entire department.

“I think Kevin is charming on the surface, but he’s a wolf in sheep’s clothing,” Stevens expanded. “There weren’t a lot of people of color as the head of the department. He always thought that he was doing the right thing, even though what he was doing is actually very destructive. He also loves unpacking people, as he said, Chinese boxes, Russian dolls, he likes getting the upper hand. He’s very charming, and also very deadly and destructive.”

Kevin’s character is caught between the hierarchy of being a boss and delivering to the higher-ups.

At the end of Act I, there is a sharp twist that forces Ahmed to confront his personal and professional identities about what it means to be a citizen and a patriot. It sharply changes the tone of the show from comedic interspersed with contemplative monologues, to create a heart-wrenchingly dramatic second act.

Both Ahmed and Samir are grilled about their loyalties. Bilal Dardai, who plays Samir, describes that because they are Muslim, they “can’t put on a disguise, at some level they are always close to being suspect.” Samir is an immigrant who has to straddle two cultures, two countries, and two languages. Dardai identified with the character, as his father went through similar experiences in his life.

Ahmed, who has been an American for most of his life, is still being questioned.

“He’s grown up and other people’s definition of citizenship informed him,” Bilal said. “It’s put Ahmed in this position. If you need to fit in, you give up what it means to be a citizen. And now he has a job where he has to use Arabic. He’s getting this pressure from all sides. Everyone is questioning his citizenship. And this is very potent right this second. Completing a surface checklist as to whether someone fulfills the citizenship duty.”

This disorientation comes through in Ardibili’s performance.

The ending of the show is ambiguous, leaving the audience reeling about what it means to be an American and what it means to be patriotic. It exposes the complexity of navigating a country that doubts your loyalty and how people conform, rebel, push through, or fall apart in the face of such adversity.

Stevens summarizes the theme starkly, saying that the show reveals “some people are never considered American, and others will never see you as American.” During a time in which our government is unleashing a systematic attack on immigrants, this play is a particularly timely work of art.

Language Rooms ran through May 18. Broken Nose Theatre’s new season opens in the fall. Yussef El Guindi’s The People of the Book opens September 6 at The Allen Theatre.