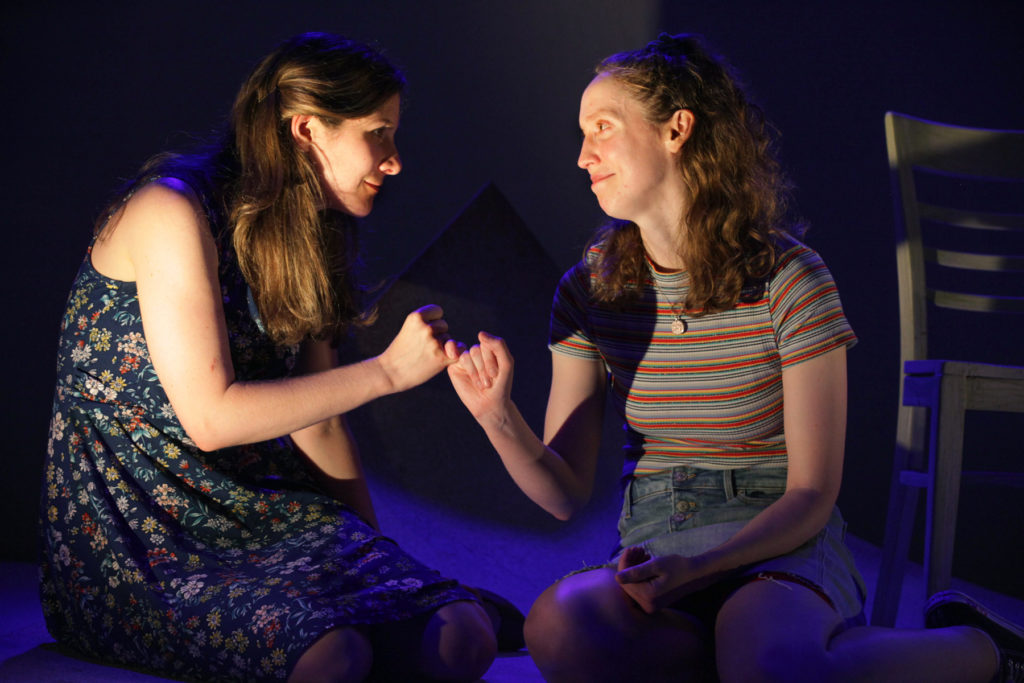 On Behalf of Every Friend I’ve Made, Kept and Lost: A love letter to “Out of Love”

Pictured above: (Left to right) Sarah Gise and Laura Berner Taylor in Interrobang Theatre Project’s U.S. Premiere of  Out of Love. Photo by Emily Schwartz.

The usual buddy comedy has a 3-act formula that nearly everyone is familiar with. In act one, the buddies establish just how close they are with inside jokes and quick wits. One may even mention their darkest moment of life in passing to establish just how strong the bond is (“You were there for me when my mother died.”; “This was my dad’s buzz saw, he loved it more than me.”; “My great-aunt whom I’ve never met and don’t hear about ever is the most important person in my life and I can’t tell anyone but you for some reason.”)

By the end of the second act, one friend has committed a major crime against the other, seeming to terminate their bonds for good. Thank goodness for the rising action of the third act, in which the hurt friend finally learns the truth behind the actions of their comrade, finding a way to forgive and help this friendship skate into a delightfully happy ending.

In Out of Love at the Rivendell Theatre, Grace and Lorna navigate an estimated 30 years of friendship, give or take a few months in utero. Both women crave something more from their lives, and they set a plan in motion to leave their small town behind.

The play dives into what happens when life hasn’t turned out as one would expect and begs the question; what is friendship, anyway? The answer: friendship between women is a cocktail of unconditional love and uncontrollable jealousy; it’s telling her to get out of your house while also asking her to zip up your dress. It’s using her secrets against her, but protecting them against the rest of the universe. It’s the feeling of hugging slightly too tight, be it from anger or adoration.

The current public synopsis gives shape to the play by Elinor Cook without giving up any of the plot. The word that sticks out appears at the very end of the summary: “…Out of Love bravely examines one life-long friendship in all its beautiful, gory complexity.” There’s the tricky word that Cook cleverly uses and that baffled this writer; complexity.

Upon first read in this context, “complex” is a depth-describing word that has been stretched into a blanket of obscurity. The vague characteristics that come with “complex” are, in personal experience, fairly predictable and based in pessimistic realism. Once the word “complex”, or its conjugation “complicated”, are applied to a piece about women, red flags pop up in the forms of speculation. “Complex” could mean any one of the various stereotypes of woman-friendship that have been played on time and again. With this word shaping the atmosphere of the production, there seemed to be no way to break expectations and deliver something authentic.

Until that is exactly what the play did.

ITP company members Sarah Gise (Lorna) and Laura Berner Taylor (Grace} had not considered the word until it was brought up as an observation during an interview with Scapi Magazine. Prior to the comment, the two women had only noticed how elements of the play reflected the normal hurdles present during many longtime friendships they had encountered. Sometimes this even crept into their working relationship.

“Being white women, similar ages, in the same company, with a lot in common means people put us up against each other and we [Gise and Taylor] get caught up in that,” Gise said. “To be in a play like this where we get the chance to say, ‘I’m so jealous’ and treat each other like competition while working together has made us so close. It’s been so helpful.”

Taylor agrees, adding, “[We’re reminded that] we’re not in competition with each other. The only way to move through this life is to lift each other up. Parts of the play show the balance of this, this codependence and competition that we grew up in.”

Gise found a familiar element to Lorna and Grace’s relationship that she knew all too well; the competitive piece of the puzzle. She said, “[Women] are conditioned to turn against each other. We treat each other with jealousy because we’re fighting for one seat at the table. If we don’t have a seat, then we’re trying to take whoever does have the seat down; if we do have the seat, we’re fighting to keep our place. It’s a deep, deep bond no matter what side you’re on.”

Taylor supports this, adding that the struggle that women face with getting what they want is something that everyone goes through.

“You always want to get to the next level, whether it’s leaving a town or having a life you’ve never had,” Taylor said in the same interview. “As women, it’s either you take down the people you are around, or you bind together. It’s this relationship where you are both completely codependent on this person and yet you are constantly in competition…”

During the warmest moments, the play is the spilled contents of a memory box, a story told in arm burns, hair pulls, cuddles and affirmations. Grace and Lorna do more than pillow talk about boys; they hold onto each other as the chaos of growing up seethes around them, informing audiences that this is, indeed, an accurate depiction of what friendship between women looks like. It is the timeline of mistakes and triumphs that young women experience behind closed plexi-glass doors, on display for the world and yet still only accessible to each other.

Director Georgette Verdin has accomplished creating a work that shines a spotlight on what truthful friendship can look like across genders. By telling a friendship story through the lens of girls growing into women, Verdin imparts wisdom on her audiences like an old pal and reminds us all that the bonds of friendship may be tested, but may not be broken.

“Out of Love” runs Thursday through September 12th-14th at the Rivendell Theatre, presented by Interrobang Theatre Project (ITP). Tickets can be purchased by clicking here. Scapi Magazine readers can use the promo code SCAPI for 50% off of their ticket for the remainder of the run (through September 14th), limit 4 per order. For more information about the ITP season, visit their website.