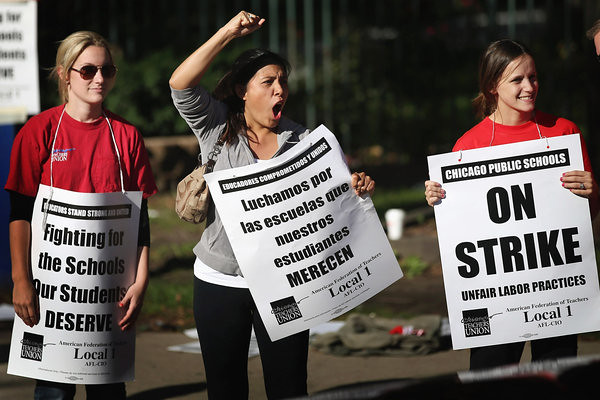 Chicago Teacher’s Union to Lightfoot: “Put Your Promise in Writing.”

Last week Mayor Lightfoot responded to the proposed Chicago Public Schools strike saying that there would be no makeup days for any days missed due to the strike, something that would break with past CPS strike practices. She indicated she wanted to increase pressure to negotiate a deal with teachers.

The Chicago Teacher’s Union issued a statement to the press today saying that the Chicago Public Schools could settle today if they wanted to, but the city has not brought the attitude displayed publicly to the bargaining table.

“Out of one side of their mouth, they’re talking about what they want to do to help families, but they bring none of that to the bargaining table in terms of in staffing, class size and things that matter to all of the families that have children in Chicago’s public schools,” said Monroe Elementary School teacher Lori Torres.

Springfield lawmakers changed the state funding formula for education two years ago to provide the district with $1 billion additional dollars in funding for Chicago’s public schools, yet educators have to beg for school nurses and school social workers.

It has been six months since the mayor’s team defended giving wealthy developer Sterling Bay $1.4 billion in taxpayer money—in writing. Meanwhile, CPS has some of the highest class sizes in the state, but it has been 22 years since educators have been able to win class size caps in writing.

“Fifty pages of counter-proposals from the Board means they’re watering down what we’re trying to win for our students,” said Robin Blake Boose, who has taught second-grade classes of 40 students at Ashe Elementary School. “It doesn’t take more than a sentence to say, ‘Put your promise in writing.’

It has been six years since CPS closed the largest number of Black schools in U.S. history, and nurse, clinician, counselor, and social worker staffing remains well below national recommendations. Teachers and school staff routinely have to scramble to provide medical services for students because schools are understaffed and privatized services are inadequate.

“While CPS says they’re ‘interested’, they have yet to put anything in writing,” said clinician Emily Penn. “We can’t even get them to respond to our proposal to ensure that social workers have private space to meet with and support students.”

The union’s demands include a three-year contract with 5% annual raises, a nurse and librarian at every school, more social workers and class size limits. The district is offering them a 16% raise over five-years.

This runs directly contrary to the Union’s claims, having made multiple statements that it’s the board that has not made significant effort to negotiate at the bargaining table.

“Union members routinely offer counter-proposals to the district’s terminally inadequate actions that are featured on both the CTU website and also in a series of video bargaining reports to members, but the consensus from the rank-and-file bargaining team is that Board has done more stalling and stonewalling during negotiations than actual bargaining.”

CPS has set the date of the strike for Oct. 17 and until then, the pressure will continue to rise for both the new mayor and the city’s schools.