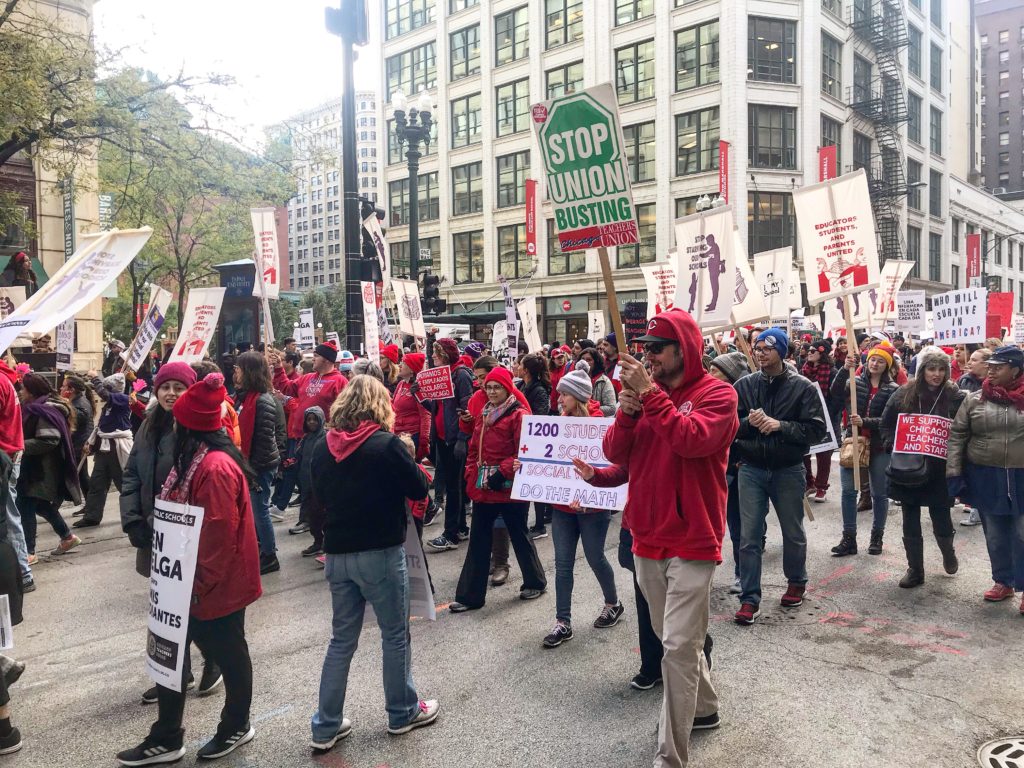 The Chicago Teacher’s Strike has hit its second day, and many are working to better understand the needs of teachers as they enter the negotiations for a better contract. Many believe that the teachers just want an increase in pay, and while that is certainly part of the negotiations, there is much more to what’s at stake, and Illinois law is keeping the conversation centered on salaries.

Walking through the strike and reading the signs, many teachers and students alike have made it clear that a need for Chicago schools is adequate support staff including librarians and nurses, bilingual needs for Latinx communities, and smaller class sizes.

According to CTU, More than 1,300 classrooms are overcrowded, almost 25% of elementary school students were placed in overcrowded classrooms, most schools only have one nurse one day a week, and many schools are unprepared for Chicago’s bilingual population.

“Bilingual education services are chronically short of both educators and resources,” the union said in a statement.

But all of this falls under a section of Illinois law that states that employers don’t have to recognize these demands in the case of a strike.

According to 115 Illinois Compiled Statutes (ILCS 5/4):

Employers shall not be required to bargain over matters of inherent managerial policy, which shall include such areas of discretion or policy as the functions of the employer, standards of services, its overall budget, the organizational structure and selection of new employees and direction of employees. Employers, however, shall be required to bargain collectively with regard to policy matters directly affecting wages, hours and terms and conditions of employment as well as the impact thereon upon request by employee representatives

This means that Chicago Public Schools legally does not have to respond to the entirety of CTU’s demands. Instead, the CTU strike has to lead with wage negotiations to open the door for full conversation around the schools’ needs.

The only thing the law does include is allowing for the bargaining to include discussion of class sizes, but it does not stipulate that the employer has to respond to those demands. In fact, it states that it is the sole discretion of the employer to decide to bargain.

Laws surrounding teacher strikes nationally are even more interesting, Illinois’ restraints on labor organizing are some of the more lenient: Only 12 states in the country allow teachers to go on strike, in all other states including Wisconsin, Indiana, Missouri, and Iowa, it’s completely illegal.

In Illinois, at least, there is a bill that has passed the House and is currently in the Senate working toward allowing teachers expanded striking rights. The bill, HB 2275, would give Teacher’s Unions more power in collective bargaining by establishing practices with which to address issues at schools and to send someone to assess these issues.

Want to learn more about the Chicago Teacher’s Union Strike? Check out the CTU website and find them on social media.