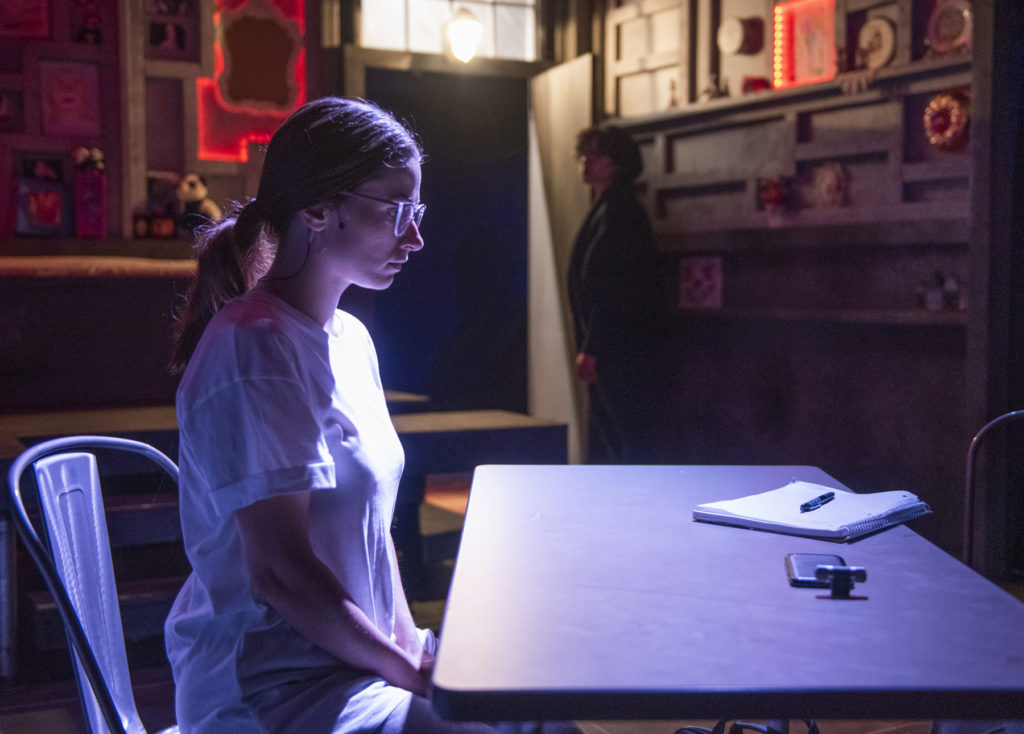 Smoking Weed in a Forest Might be the Answer: New musical Proxy explores blame and healing through punk-inspired music

How much of your life do you take complete responsibility for? Surface things are fairly easy to point out; did you take out the trash? Remember to pick up milk on your way home from work? Leave ten minutes early to drop off a package at UPS? Why do you take ownership over these items? Easy: because no one else is going to do it.

New musical Proxy dives directly into these themes in a heartfelt, visceral musical that anyone who has struggled with facing their past will be able to identify with.

Nessa is a twenty-something working in New York City for an online journal where she continually writes pieces that receive a majority of the clicks, a fact the Nessa totes as her both a weapon and shield when her boss informs her that the board would like to fire them both. The solution: an unbelievable story that will be shared over and over again, outperforming the rest of the site by a landslide and saving their jobs.

The story in question is Nessa’s own traumatic past. With her laptop and a scheme in tow, Nessa makes her way back home to a tiny Minnesota town where nearly fifteen years ago, her best friend attacked her in a forest.

In many a show revolving around trauma or pain, the audience normally has to wait for the big reveal of the cause of such turmoil within a character. The varied heaves and haws of any burdened character are usually intended to draw one in and make the reveal all the more dreadful. This show, however, skips over the tension that comes with pulling back a curtain and immediately submerges you into Nessa’s story.

As a child, her best friend Ronnie lead her into a forest at the behest of some greater being and stabbed her nineteen times. Ronnie was sentenced to a psychiatric hospital for evaluation, treatment and constant supervision. This, she tells herself, is the story that will save her job.

Proxy creators drew their inspiration from the infamous case involving three preteen girls and a fictional character named Slender Man. Those who are not familiar can click here for more insight, but many are familiar with the blank-faced horror figure.

There are many elements that the audience will certainly remember and draw the connections to, but at its heart, Proxy is not about its source of information. Rather, it is about what happens in a world post-trauma, when the media attention is gone and one is only left to ask themselves, “What now?”

The most fascinating aspect of this production is the juxtaposition between how Ronnie has been treated since the grisly act and how Nessa has been treated. We meet Ronnie after she has been hospitalized for roughly fifteen years, working day in and day out in an environment that has helped her regain control of her sense of presence and reestablish what is reality and what is not. Ronnie socializes with a small but consistent group of people, be it her doctors or other patients in the hospital.

Ronnie also draws portraits and landscapes and imitations of the visions she sees and the voices that she hears, constantly giving these hallucinations reality and reaffirming the things her doctors have helped her come to understand; the voices and things she is seeing are not based in common reality. For all intents and purposes, it appears that this woman is being successfully rehabilitated, considering the information the audience is given.

Nessa, the victim of this attack, is hospitalized for roughly a week before returning home. She’s met with a barrage of media attention and requests for retellings, to which her mother tells them all, “She’s doing fine. We’re doing fine. Everyone is fine.” And that’s the end.

Except that it’s the beginning. Proxy is a handshake between the concepts of blame and ownership, of what it means to “deal” with life and what it means to “heal” from life. Nessa lives under the assumption that life, like this horrific event, happens to you; all there is left to do is to be burdened and scarred with the remains of what was.

“We have to acknowledge that often times [when discussing true crime] we end up focusing on the person who did the horrible crimes rather than the victim themselves,” Carisa Gonzalez, playing Vanessa, said. “A lot of time, that’s where all of the energy and press goes. That person does need to be taken care of, so whoever is in charge of making sure that person doesn’t do that thing again? That’s where all the focus goes. The person who was the victim in the situation have a choice to do what they want and deal with what happened with them.”

In this case, the person who gets the attention is Ronnie, the girl who was so convinced that hurting her best friend was the right thing to do.

“I think Ronnie is doing the best that she can in her situation,” Tessa Dettman, the actress playing Ronnie said. “She’s been getting continuous help for 15 years. Emotionally, she’s processed this event better than Vanessa, who didn’t ever have a chance to process it… [Ronnie] can only focus on being better from now on.”

Ronnie has spent years owning a plethora of realities about her actions, a myriad of doctors and counselors in stride to assist. Ronnie’s journey toward balance and understanding despite her isolation from the outside world compared to Nessa’s tainted existence is a stark reminder that just because you are unchained from a place does not mean you are free from the memories.

Nessa, her mother and the rest of the characters learn to redefine what it means to take full control of something that has happened to you (and the things you’ve done as a result) and learn to cope. At its heart, the show is a deep dive into owning your life and learning to live with the past instead of allowing that past to own you.

With a punk-meets-folk score and a cast of characters that make it easy to identify with this little family, Proxy takes a true tragedy and gives audiences permission to look at their own traumas and say, “I’m leaving you at the top of a mountain…after I smoke this weed.”

Proxy is a new punk-rock musical with book by Austin Regan, music and lyrics by Alexander Sage Oyen, and lyrics and additional book by Rachel Franco. Is making its non-equity world debut with Underscore Theatre Company. The show runs until November 24, 2019 at The Understudy Theatre. Tickets for upcoming performances can be purchased here.