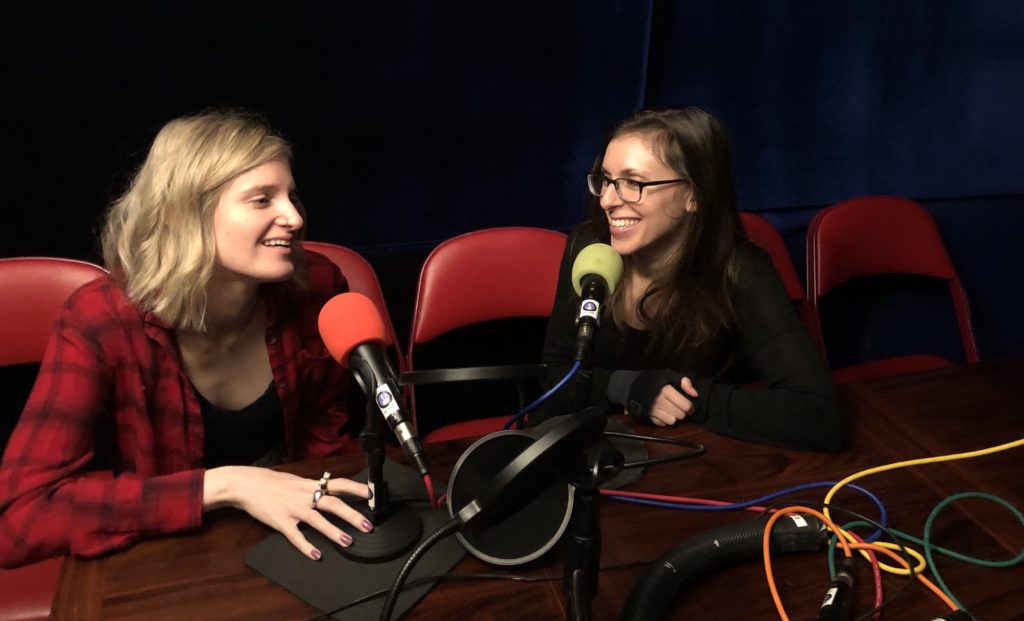 I hate New Year’s, but the one saving grace of this dreadful holiday are best-of lists all of which I, possessing the willpower of a robot chicken, click on. It occurred to me that if there had to be a “Medium that Defined the Past Decade,” it would be the podcast: this uncomplicated audio format, suspiciously similar to the century-old radio.

And I’d have to say that within the realm of podcasting, improv comedy podcasts were the gold-medal recipients. Before you flip over your desk and dash your Alexa against the wall, yes, I know there are True Crime and foodie and storytelling podcasts. But comedic improvisation podcasts take first place because unlike those other forms, which can exist in visual formats, improv does not perform well as a grainy YouTube video.

“Improv is one of those things that doesn’t translate to video,” Adal Rifai, one of the founders and hosts of the improv podcast Hello From the Magic Tavern recently told me. We were sitting at the iO theater, where Rifai has been performing improv for the past thirteen years. “The sadness and beauty of improv is that it has never existed before and will never exist again.”

Podcasting changed that. It gave improvisers the opportunity to capture their art for posterity and to transmit it to audiences who would otherwise never be able to see them perform. For that reason, many thousands of improvisers have leaped on the podcast bandwagon, finding joy, permanence, and no small measure of success in podcasting.

Rifai and his co-hosts of Magic Tavern, Arnie Niekamp and Matt Young, certainly have found all those things. Their show has transcended the boundaries of the Chicago improv scene and has gained a worldwide following, securing a coveted spot on the ur-comedy podcast network, Earwolf. Now, the podcast tours, sells merch, and has inspired some very cool fan art.

Most of the heavy hitters of improv podcasts are based in L.A. or New York—shows like Comedy Bang Bang! and Improv4Humans come to mind. Now, Chicago is claiming its seat at the podcasting table, and bringing along its extensive improv history and knowledge.

“Chicago has an embarrassment of riches,” Rifai said. “We are the most amazingly talented city in the world for improv.”

But raw talent does not a podcast make, and I asked Rifai why he felt Magic Tavern has thrived. Firstly, he points to the power of the podcast network. Belonging to Earwolf has opened up loads of doors for them; they’ve been able to forge connections with other podcasters and invite and be invited as guests on other shows.

“The beauty of the network is that there’s a lot of cross-promotion,” Rifai said. “There’s a community in L.A. Everyone is so generous with their time. Everyone is looking out for each other.”

Slowly but surely, Chicago improvisers are beginning to coalesce and form networks. There’s the Chicago Podcast Cooperative, which helps connect podcasts to sponsors willing to pay for advertising. And there’s the iO Podcast Network, iO’s very own podcast platform, which is headed up by Brittany Bookbinder, a performer at the theater and creator and host of the podcast, Killer Conversations, a show where she interviews deceased criminals, voiced by improvisers.

The iO Podcast Network is a very important piece of the Chicago podcasting puzzle, offering performers and listeners a space to post and find great comedy podcasts. iO even has a studio in its basement, which was built out of old materials left over from a set.

During the early days of the network, Bookbinder simply scheduled podcasters and facilitated their use of the space. Now, two years later, as Executive Producer, she’s reviewing applications to join the network, promoting podcasts inside and outside of the building, and making creative decisions about the future of the network. Right now there are thirteen podcasts on the network, all regularly producing content.

“Some people are releasing them weekly and I’m really impressed because it can take a long time,” Bookbinder said.

The network has made leaps and bounds since its genesis, but launching a brand-new podcast network is never easy. It takes time to set up a working website, to figure out how to handle large files, to get everything looking spick and span.

“Everything takes longer than you want it to,” Bookbinder told me with a laugh. “I’m learning right alongside everyone else. So I’m an open suggestion box.”

Other than establishing your podcast on a network, Rifai also stressed the importance of an easily-communicable premise. “Make sure whatever you’re making has a shark-tank pitch,” he said, or at the least, a “loose hook.” Rifai’s podcasts all have conceits, whether it be A guy fell through a portal behind a Burger King into another dimension or We’re going to solve riddles. Concepts can be high or low, but one must be present, he argues, if the podcast is ever to attract listeners.

At iO, Bookbinder works with applicants to come up with an idea that listeners can easily grasp.

“We wanted everything to be specific enough that people would find an audience,” Bookbinder said. “The more specific a pitch is, the easier it is for listeners to know it’s a new idea that they haven’t seen, and that they’d like to see.”

One group that has found success on the iO network is Generation LatinX, a company that brings together LatinX improvisers to make art in multiple mediums, including podcasting, improv, and video.

Mishell Livio, the renaissance woman who got the whole thing started, came from a radio background, making podcasting an easy next step. Livio’s first podcast on the network, But, Where Are you FROM?, invites LatinX performers to talk about their backgrounds and upbringings, unpacking complex answers to the reductive titular question. Generation LatinX also has taken over the podcast The Bat, an improv form where the set is performed in the dark. In both cases, a solid conceptual framework has kept things running smoothly.

Livio records her third and final podcast with her team Improvised Jane Austen. This was one instance where the Network suggested a little more clarity of concept when they pitched.

“We had the idea for the podcast and we pitched the idea. And they said we had to work it out a little more, and we did. And then they said, ‘now it’s an idea, go ahead and do it,’” Livio told me.

And though Bookbinder provides guidance to new podcasters, she doesn’t see her role as being the gatekeeper to the network. “I had no interest in imposing my personal viewpoint on what a podcast should be. I really see my role as facilitating other people. ‘What do you want to do and how can we provide a platform?’” Bookbinder hopes the network will be a “breeding ground for comedians in the community to try things out.”

Rifai’s final counsel based on his success with Magic Tavern was to make a show you would want to listen to. When he, Niekamp and Young were getting started, they thought, “we’re just going to do this podcast and it will probably fizzle out. We thought this will be funny for our twenty friends. And once we found an audience we were like, ‘this is crazy; people are enjoying this!’ We were just trying to make each other laugh.”

On her end, Bookbinder looks for that sense of fun, too. When she was first getting up and running, she says her “biggest thing was a specific idea that someone was really passionate about. I wasn’t looking for something in particular other than a strong sense of commitment, someone saying, ‘this is what we want to do, and we’re gonna do it.’”

A passion is certainly what drove Livio to start But, Where Are You FROM?: “I like talking to people. I had been an actor, and I just didn’t like the things people would say and do and get away with. I was always curious; I wanted to know why you’re making me do it multiple times. Is it me? Is it you?”

Now, through her show, Livio gets to be inquisitive and promote the mutual understanding she feels is often absent from discourse: “The podcast explores the identity of all genders, religions, ages, and backgrounds. I think the podcast format works because you can’t see us; we are and can be anyone. Ideally, the listeners will stop otherizing based on appearances and listen to our stories.”

The mission of Livio’s podcast reflects what podcasts can do for us more globally. When audiences can’t see guests, things like appearance, celebrity status, and setting become meaningless, and the only thing that matters is whether or not the disembodied voices can engage you.

As Rifai puts it, “podcasts are the great equalizer.” Some hotshot celeb might be able to throw thousands of dollars at their podcast, record from a fancy studio, and post episodes to their highly-trafficked social accounts. But if the material isn’t interesting, listeners will turn it off and maybe instead tune in to a random yet hilarious podcast with a bunch of goofs that records out of some city in the Midwest…

Chicago might not yet be on par with the epic improv podcasting scene in L.A., but we can get there, and we are getting there. The iO Podcast Network and the Chicago Podcast Cooperative are making it easier for podcasters to get their shows heard. And Chicago has absolutely no dearth of creative, talented, funny people who are making awesome, hilarious, and addicting shows. With literally nothing else—geographic barriers, financial necessities, access to big celebs—holding us back, at this point, it’s only a matter of time.

Dream with me for a moment, reader: As we leave behind a decade fraught with political and economic turmoil, societal unrest and injustice, and lots and lots and lots of anxiety, isn’t it nice to think that podcasts, these simple little pieces of portable audio, are helping to connect us to each other? This time next year, as I’m scrubbing mindlessly through best-of lists, I might see my very own podcast listed on a web page expounding the merits of my show and how much the inhabitants of Blerim, Albania, population 913, love it.