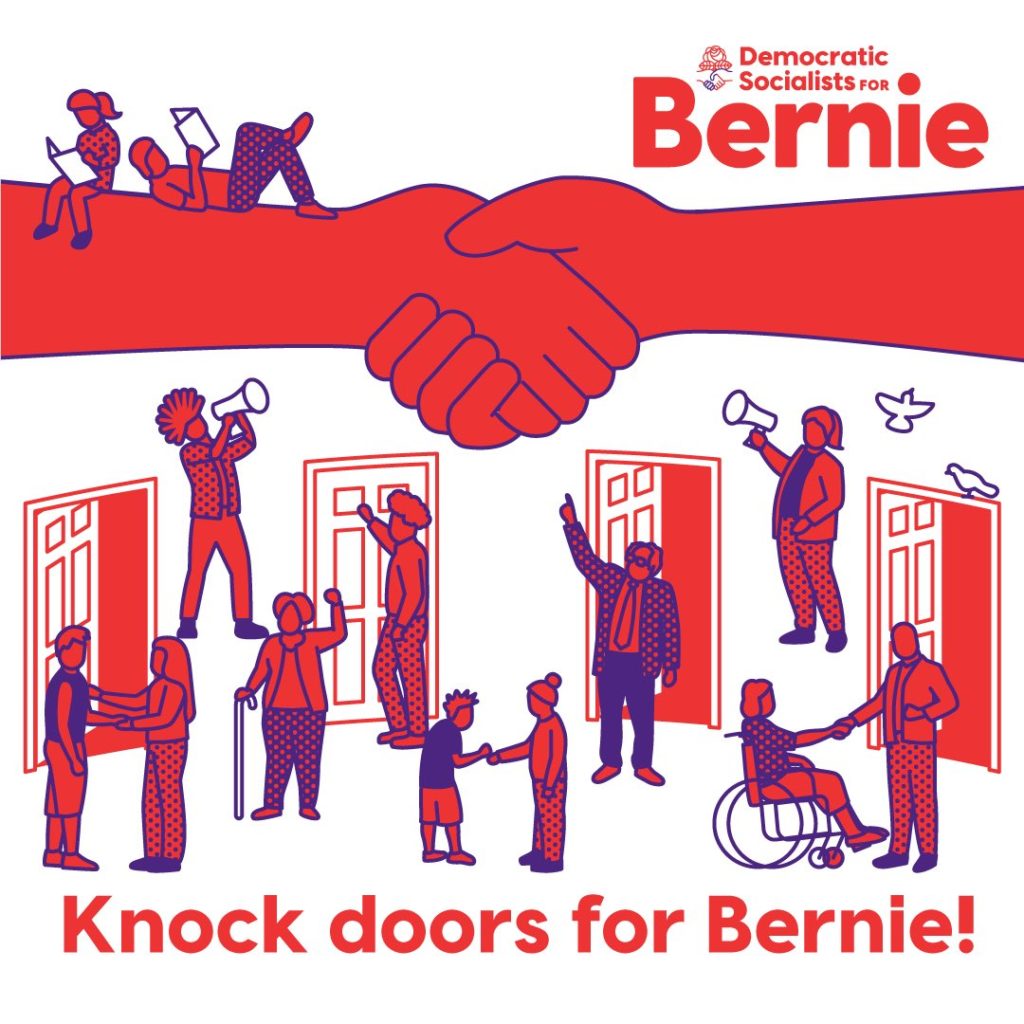 Why Chicago DSA is All In for Bernie

I’d really enjoy being able to elect the president of the United States. I don’t mean, simply, that I want my chosen candidate to win (though, obviously, this is also true).

I mean: I believe in democracy, and I want my vote to not only count, but to elect someone who is actually working for my interests.

I want some power. Isn’t this the point? To vote in the interest of my health, my retirement, my future that is threatened by a fiery heat death that I had no part in damning onto all of those who will live past 2040.

Why vote if it’s common practice for candidates to promise harsh oil regulations and an affordable healthcare system, then exact the opposite due to the policy leverage corporations have via their cash? They do that. They’re allowed to do that. It’s the political status quo.

On the plus side, I never thought I’d see a candidate who rejects super PAC and lobbyist money. In other words: there’s hope.

On January 27, 2020, Scapi Magazine met with Melinda Bunnage and Robin Peterson, co-chairs at the Chicago Democratic Socialists of America, to learn about the exponential growth and current efforts of the Chicago DSA.

“Another way of thinking about it [DSA] is bringing democracy to every aspect of our lives, including the workplace and the economy,” Peterson said. “It’s hard to imagine because we’re so far away from it, but people can and deserve to have control over even the work that they do. Over all the aspects of their lives.”

This is largely why, at their January chapter meeting, the Chicago DSA democratically voted to focus all of their efforts, or, “go all in on” the Bernie Sanders campaign.

“It’s not just because we love Bernie and we want to see him win, but also the Bernie campaign is kind of like the gateway drug to socialism,” Bunnage said.

Being a chapter of a national organization, the Chicago DSA is able to organize both nationally and locally. Usually, they focus on local issues like democratizing ComEd and protecting housing rights.

“All of these things are amplified when we talk about Bernie’s platform,” Bunnage said.

Sanders’ platform addresses the same issues nationally as the Chicago DSA does locally. He is the only candidate that supports universal rent control, and Democratize ComEd has an “obvious relation to the Green New Deal.”

So, to veer from local focus and align their platform with Sanders’ national campaign is a double whammy: the Chicago DSA can work to elect democratic socialist policies nationally, while strengthening their Chicago movement through the exposure Sanders creates.

“People may not know the DSA, but they’ve probably heard about Bernie,” Bunnage said. “We think the Bernie campaign is important to grow the DSA even more.”

By campaigning for Bernie Sanders, the Chicago DSA can better build a strong infrastructure. Namely, more people and, in turn, more impact: “Everything we think about, whether it’s Lift the Ban or Democratize ComEd or Bernie, ultimately, we know as Socialists and DSA, we need to build a mass movement of the multiracial working class across the country to win,” Bunnage said.

The Sanders’ campaign is not only about Sanders, it’s about the movement. He is organizing a political movement that, as Noam Chomsky put it in October 2019, “doesn’t just show up at the polls every four years and push a button, but keeps working.”

Bunnage and Peterson said that, at every step of organizing or prioritizing, they ask themselves, “How does this help build that movement that we know we need to win socialism?”

Right now, we are not the people of the United States. We aren’t the people of the US that have individual freedoms protected by a great democracy. The people of the US, the ones that are being cared for and protected by our government, are our meekest and purest, like Big Oil, Goldman Sachs, Monsanto, tobacco, and the arms industry. In our current system, both nationally and locally, we lack power over economic, health, and environmental policies that affect our survival.

With media smears, super delegates, coin tosses, and shadow apps, it’s not unreasonable to believe that our votes don’t count. It’s true that the Democratic establishment (and the GOP, but, duh) is trying to disorganize movements that empower working class people.

Though the US excludes nearly all of its people from exercising impactful political leverage, we should not give up participation. We should vote, make calls, canvass for Sanders. The DNC will keep trying to hinder our movement, but we can still win. We just have to win by a lot.

“We don’t think Bernie is going to save us. It’s not like we elect Bernie and we’re done. We think it’s about building a mass movement,” said Bunnage. “It’s about people power, the collective strength of the working class coming together.”

If you want to learn more, you can listen to the entire interview with Chicago Democratic Socialists of America here.