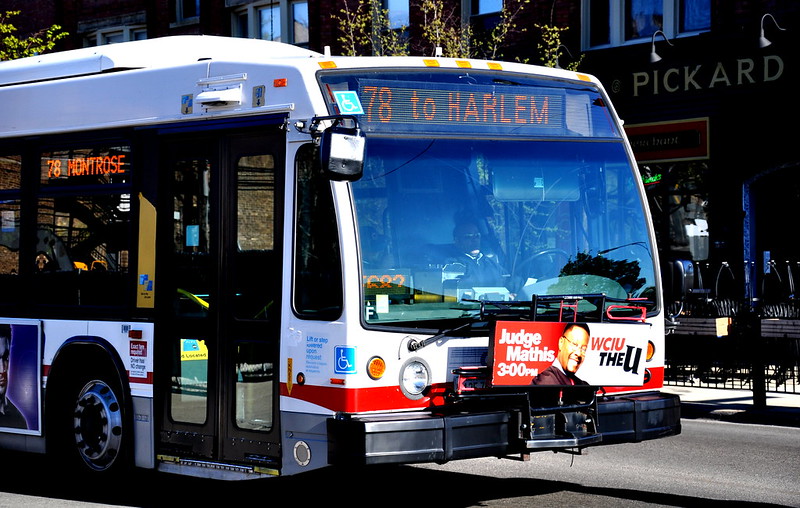 At a press conference on June 8, CTA workers announced claims against CTA management who “illegally broke up workers’ meetings discussing the safety and ethics of driving ‘police shuttles’ which are being used to transport police and National Guard to demonstrations opposing the racist police murder of George Floyd.”

In short, CTA workers have blown the whistle on CTA Management violating their freedom of speech to stifle labor power and in turn help the CPD.

The context here is that Chicago finds itself in a time of civil rights discourse:  with the societal impact of COVID-19, the murdering of Black and Brown people by police, and subsequent mass protests put on display, like all history, of nature meeting structure. The gadgetry of capitalism, imperialism, racism, and violence.

COVID-19, which is being sold all sorts of ways (save some fringe media) except safely and seriously, has sped up the genocide that is mass incarceration, that is low income and shrinking labor power, that is policing. All elements of US life that maintain capitalism and white supremacy.

Thousands of people, most of them Black and Brown people, have died from COVID-19, and police continue to use bullets to add more to that death count asnationwide protests began.

On June 3, CTA Union Leader Erek Slater was assisting coworkers in their seniority pick of work schedules when he was confronted by police. CPD told Slater that if he didn’t leave the premises, they’d arrest him. Despite the Union’s agreement to always have a rep on site, Slater and workers decided it was best he comply.

An elected Executive Board member of ATU Local 241, Slater had put in six years as elected shop steward for bus drivers and executive board member of the Amalgamated Transit Union (ATU), Local 241. Slater’s sudden removal was the CPD attacking freedom of speech and safe working conditions for CTA bus drivers and Union Representatives. Not to mention the ability of workers to organize. Funny how the police even work to oppress labor movements.

“A debate is raging among transit workers – in our social media discussions and at the workplace breakrooms and parking lots: Is it safe to drive police to demonstrations and working-class neighborhoods where police and National Guard confront protesters demanding justice for George Floyd?” said Slater.

Why did CPD pull Slater offsite with no warning? Management wrongfully accused Slater of advocating for a wildcat strike, and the charge may cost him his job.

Slater explained that three days before his expulsion, CTA management illegally disbanded a union meeting at the bus garage parking lot. Members were discussing the ATU International and ATU Local 1005 statements regarding the police murder of George Floyd.

The international statement declared that “members have the right…to refuse the dangerous duty of transporting police to protests and arrested demonstrators away from these communities where many of these drivers live. This is a misuse of public transit.”

“They said we couldn’t discuss if it was safe to drive CTA police charters,” said Slater. “They said we were promoting a wildcat strike.”

Management heckled and threatened to call police until workers decided to end the meeting.

A wildcat strike isn’t as wild as the name suggests. It might look exactly as you’d imagine a strike, workers organizing among themselves, let’s say, to stay home from work until they gain safer working conditions. It’s just that strikes are illegal if they don’t follow the rules agreed upon by a formal union and management, and these rules are always plentiful and restrictive.

A fundamental issue here, aside from police power disrupting workers’ rights, is that there is such a thing as a wildcat strike. Like weed was made illegal as an excuse to incarcerate Black and Brown people, the wildcat strike is made illegal to oppress workers. Can you imagine the power you’d gain at work if it was legal to simply gather as many coworkers as you can and refuse to work until the boss meets demands?

It should be a considered a human right to utilize people power within capitalism, a system that essentially requires worker exploitation. Cleverly, this is exactly why wildcat strikes aren’t allowed: Capitalism requires that workers cannot use their numbers to bargain, because they’re the 99%. It’d kinda ruin the whole exploitation thing.

Regardless, Slater wasn’t even organizing a wildcat strike. The CTA contrived these false accusations from Slater’s advocacy against transporting police to protest sites. His position, along with the Union’s organizing powers, is threatened by the CPD, whose scope and influence have been exacerbated by COVID-19.

“Our unions have struggled to continue our democratic traditions within the COVID-19 pandemic” said Slater. “Many workers don’t have access to mass-membership meetings where we can discuss and decide what to do together.”

Management continued to oppress union meetings regarding police transport to protests, and Slater worked with allies to file an emergency, temporary restraining order.

“Plaintiff Slater alleges that the defendant CTA is violating his First Amendment rights under Color of State law by prohibiting him from discussing the safety, political and moral concerns held by himself and other bus operators related to the dangerous duty of transporting police to protests and transporting arrested demonstrators away from communities where many of these drivers live and discussing whether bus operators have the right to refuse said duties.”

After the CTA took him out of service, Slater’s legal counsel filed federal charges against the CTA for breaking the First Amendment. There’s also an online petition for dropping the wildcat charges and reinstating Slater.

Over 100 people showed at the June 8 conference. There, Slater spoke against the CTA’s suspending service during protests against the racist murder of George Floyd. A curfew order was put out with only half hours notice, and protestors who already rode the CTA downtown were stuck in an essentially military zone, in the dark, “illegally.”

Meanwhile, Slater pointed out, not once during the pandemic did the CTA suspend services for even just a few hours, overnight, to disinfect against COVID-19. Yet, their refusal to shut down per losing a couple hours’ profit was immediately forgotten when the CPD needed help trapping protestors.

“Now public transit is shut down because of legitimate protest against state violence?” Slater said. “Is using CTA buses to block protests a legitimate use of public transit? Is driving National Guard and police to scenes of physical conflict safe for public transit workers?”

Slater’s Lawyer Nicholas Kreitman discussed CTA conditions in general during the pandemic, which violated OSHA. Forcing bus drivers to transport police is not only a violation of civil rights, but worsens their already dangerous working conditions: CPD rarely wear masks and, especially with the protests happening, interact closely with the public without social distancing.

“A few days ago, ATU local 1005 transit workers in Minneapolis took a stand by refusing to transport police and prisoners. Their union held emergency mass phone meetings and backed workers initiative and bravery with community and union power,” said Slater. “This sparked a national movement of transit workers that is as beautiful as ever seen. New York City bus operators are being cheered by the public for refusing to transport police, or bring protesters to jail. All over the world workers are joining protests against police brutality like we have never seen in history. All working people should join them!”

Ed Hershey spoke at the conference about the historical connection between leftist movements and labor movements. The last time CTA workers held a wildcat strike was in 1968, following civil unrest after Martin Luther King Jr. was assassinated, and after the National Guard was called on anti-war activists protesting Hubert Humphrey’s Democratic nomination.

In fact, this is not the first time a pandemic, brutal economic conditions, and police violence against People of Color have met in the form of mass unrest. In 1919, the US saw a Red Spring, where demonstrations against police violence followed the first wave of Spanish Flu.

The CTA sees the mutual stakes workers and civil rights protestors have.  The are, said Hershey “afraid other working people may wake up and follow the young people who are protesting the racist murder of George Floyd.”

Speaker Martise Chism, board member of the board of the National Nurses Organizing Committee and granddaughter of a civil rights activist, emphasized the historical connection between organized labor and civil rights movements.

“CTA and the city of Chicago are so afraid of what [Black Lives Matter] means, that they are firing workers who question whether they want to be complicit in the suppression of this movement,” said Chism. “We demand the city of Chicago to stand on the right side of history. We can’t breathe until CTA takes their knees off the fired CTA workers’ necks.”