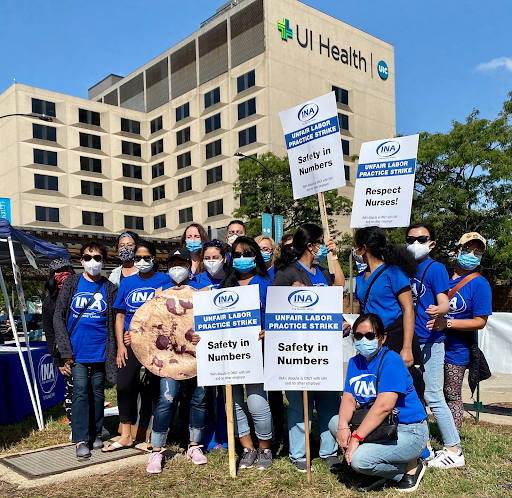 Get Up, Get Down, Chicago is a Union Town

As of today, 300 workers at UIC have been infected with COVID-19, and two have died.

On September 14 members of Service Employees International Union (SEIU) Local 73  who work at the University of Illinois at Chicago (UIC) walked off their jobs to demand administration “respect us, protect us and pay us.”

They joined 1300 nurses in the Illinois Nurses Association (INA), who themselves began a strike on September 12. Together, the unions are “in a fight for economic and health justice.”

“UIC strikers are leading the fight to protect all workers in the name of their colleagues who have become sick and even died because of coronavirus,” said SEIU Local 73 in a press release. “Throughout the pandemic, UIC workers have gone to extraordinary measures, often risking their own health without the personal protective equipment they need to care for patients and serve students.”

The INA’s three year contract was supposed to expire in August but was extended to September due to a lack of budge from the administration. INA president and UIH nurse Doris Carroll said that one of their most pressing demands was for safe nurse-to-patient ratios.

20 bargaining sessions led to not even a semblance of a new contract. In response, the nurses authorized a week long strike in a 995 to 12 vote on August 20. Two days later, with a 94 percent majority, Local 73 would add pressure to administration by joining the INA with their own strike.

“We went into this demanding that we wanted to see significant yearly cost of living increases, market wages, $15 minimum, hazard pay, and steps for the professionals, and steps for people at the top of the scale,” said SEIU 73 Local. “After bargaining for six days straight over countless hours, management refused to budge on economics.”

Just a few days prior to the September 14 strike, when SEIU Local 73 would meld in solidarity with the INA, workers discovered UIC was preparing anti union tactics like bringing in out of state workers to cross the picket line.

“UIC is bringing in workers from states with higher COVID-19 transmission rates to break a strike from a workforce complaining that management risks worker and patient lives due to inconsistent COVID-19 safety protocol enforcement, “ said Dian Palmer, SEIU Local 73 President. “We want to come to an agreement that is fair and just for UIC workers, but we’re also ready to strike. UIC workers are not only fighting for their livelihoods, but for their lives, the safety of their families, and the communities being served.”

SEIU Local 73 is a labor union that primarily represents workers in public service and publicly funded positions. Between Illinois and Wisconsin workers, SEIU local represents about 29,000 members who work in schools and social services. Their mission statement is “dedicated to improving the lives of workers and their families and communities.”

4,000 SEIU union members and 800 nurses joined to strike. At UIC, 73 SEIU members comprise medical and lab technicians, and hospital clerical and maintenance workers. Along with proper COVID safety measures, UIC workers on the frontlines are fighting for a 4.5% pay increase over the next four years and $15 minimum wage. They are striking for health, safety, higher wages, and economic security.

Strikers have dubbed their movement, “Strike for Our Lives.” They’re striving for safety and fair wages, but also fighting against institutional racism at UIC; Most of the workers in SEIU Local 73 are Black and Latino, and many of UIC’s nurses are Black, Filipino, and Latino.

“We are ready to fight! Stand with us as at Noon at 1717 W. Taylor St, as we aim to dismantle the culture of disrespect from UIC,” workers announced. “We are essential workers on the frontlines of the COVID-19 pandemic and others dealing with its impact. We need more than a pat on the back. We need essential pay. We demand a living wage of at least $15/hr.”

“They can afford to pay you what you’re worth,” said Taylor. “I can’t understand how a city would treat the two most respected occupations–that’s teachers and healthcare workers, because you can’t make it without either–so how is it that you all can’t come up with 5 percent? They got it, and until they give it to us, we’re out here.”

Members chanted in solidarity “SEIU do what you gotta do,” “INA all day,” and, “No contract, no peace,” and, among my favorites, a concise “Shame on you!” They held signs that said “safety in numbers” and there was a cape with “essential, not disposable,” written on it. Local 73 member and UIC worker Kanita Greer spoke about UIC’s unfair and disrespectful treatment.

“We have been stepped on and looked past for too long. For months UIC has told us we are essential. For months, UIC has said that we are heroes,” said Greer. “If they really felt that, then I wouldn’t have to fight tooth and nail to make $14 an hour, which is still below Chicago’s minimum wage. I put my heart and soul into this job, and what do I get in return? Nothing.”

INA member Alice Johnson took inspiration from the Mother Jones statue that lives nearby the rally location. She paralleled Mother Jones’ strength–she lost her entire family in the Yellow Fever pandemic and in turn became a renown labor leader–to their own.

“Regular people became heroes in times like these,” said Johnson. “All of you are my heroes.”

On September 18, more than 1,000 striking UIC workers marched from Millennium Park to the Thompson Center in order to pressure Pritzker into supporting their fight for justice. Days prior, the INA’s executive committee wrote a letter to Pritzker laying out some of their causes:

“Nurses are still fighting for staffing that will keep patients safe. Putting a maximum limit on the number of patients that may be assigned to a nurse is better for nurses and better for patients.”

In immediate response to the nurses’ strike, UIC sued to halt specific critical care nurses and technologists from striking, saying their absence would threaten public health and safety. UIC won the court case, a victory that keeps 500 nurses on the job. The nurse strike was voted to end 6:59am Saturday, September 19. They returned to work without a contract, but are confident that better negotiations are coming.

SEIU 73 local’s service workers will continue to strike until negotiations are reached. On Wednesday UIC’s Students for a Democratic Society (SDS) stood alongside SEIU local 73, where student members of the organization spoke.

Since the strikes began, both unions have seen solidarity from organizations like SDS, local government like Jeanette B. Taylor, Jesse Jackson’s Rainbow PUSH, and other unions like Chicago Teacher’s Union (CTU), Council 25, Teamsters 325, IBEW 364, and individual trade union members. UPS workers with Teamsters 705 honored the picket line by refusing to deliver packages to UIH.

Currently, as SEIU Local 73 enters their second week of striking, they urge allies to call Pritzker’s office and pressure him to step up for UIC workers.