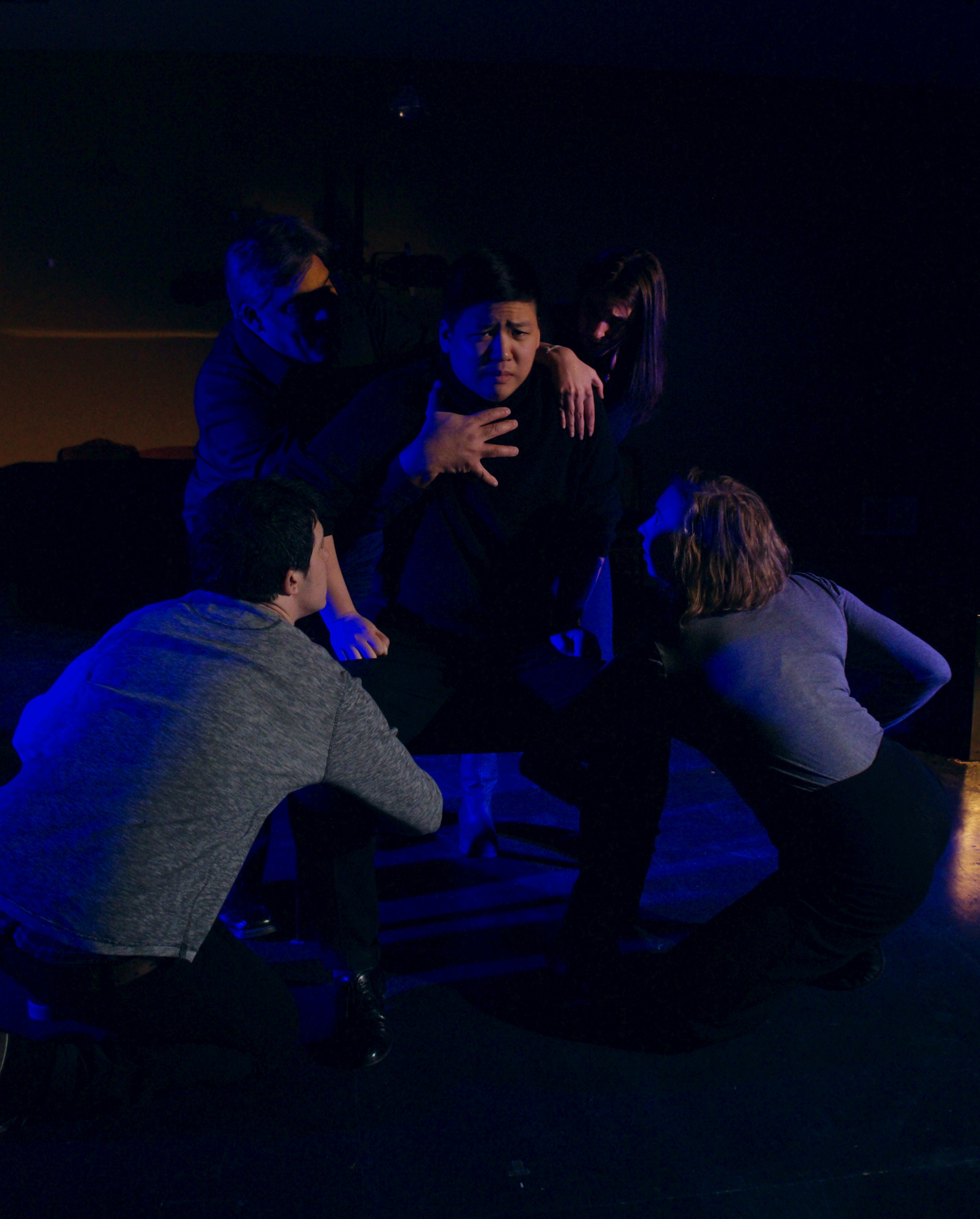 “Liep âne leit mac niht gesîn.” (“No one loves without some pain.”)

The middle high German love song “Slâfest du, friedel ziere?” by Werkraum is hummed, sung and played throughout Anaemic Theatre and Voice of the City’s “YIZKOR.” Its melancholy melody and poignant lyrics reflect two timelines: one focused on a Parisian-Jewish cabaret troupe in 1938 while the Nazis continue their rise to power; the other focused on a Jewish family in 2018 Chicago, struggling with a death in the family and increasing public acts of anti-semitism.

In three and a half weeks, Anaemic Theatre wrote, devised and staged an entirely new play. Most of the production team and cast had some to no experience in devising a play prior to “YIZKOR.” In fact, the most surprising thing was that they did not originally intend to devise a play at all.

After witnessing the Charlottesville riots; the destruction of the Boston Holocaust Memorial; swastikas painted on Jewish businesses and religious buildings, and other public, anti-Semitic acts, director, deviser and producer Joey Lubelfeld set out to produce “Lebensraum” by Israel Horovitz.

“It really stuck with me since I read it in college,” Lubelfeld said. “It was theatrical in its style and it told the story of a history repeating itself.”

Lubelfeld and associate producer Ben Kaye set up fundraising campaigns, secured practice and performance spaces and set up audition times. Between the first set of auditions and callbacks, they learned that Horovitz had been accused by nine women of sexual misconduct.

“It was a very destructive and aggressive abuse of a position in power,” Lubelfeld said. “Ben [Kaye] and I met that night and said, ‘we can’t do this play, it’s out of the question.’”

Ultimately, Lubelfeld and Kaye decided to devise a play based on similar themes, specifically focusing on the Holocaust, government-sanctioned genocide, anti-semitism, immigration, faith and family. After informing the actors who were invited to callbacks, re-organizing the donor process and compiling the production team for “YIZKOR,” they began the process.

“I had to figure out how we could do this all in four weeks, along with working with people I had never devised anything with before and who I hadn’t worked with in the past,” Lubelfeld said.

All about the process

During the first week of rehearsal, playwright Chris Vanderark said he mostly took notes. Vanderark focused on catching every idea people were bringing into the room, taking down themes and thinking about how to approach each input. It was only in the second rehearsal that he understood where the play was going.

“There was an exercise that was not really aimed at finding content for the play,” Vanderark said. “But somehow, it worked out so nicely, and overnight, it felt like the play had formed itself.”

Immediately when Vanderark gave the team a script, they started working. They discussed and pointed out what they wanted to change, reshape or take into a different direction.

“We would have scenes that we would really love, but they didn’t quite serve the direction things were going in,” deviser and actor Melanie Vitaterna said. “Then we would have a line three scenes back that no longer made sense. We’d be running through the script and want to change something at that moment. We have a filled out ensemble and production team with strong, creative ideas.”

Even long time Chicago theater artists, like development outreach coordinator for Redwist theatre Johnny Garcia, came onto the project and knew very little of what to expect.

“I’ve been doing theater for many years and I’ve never done anything like this,” Garcia said, who was also an actor and deviser in “YIZKOR,” “It was really interesting, unique and scary. But I trusted, I trusted all along. I remember we completed a couple of scenes that I was watching in the shadows and I thought ‘wow, this is really something special.’ It’s a really beautiful piece that we’ve put together.”

The first deviser and actor to be brought on was Alec Phan. He pointed out the necessity of having Lubelfeld, Vanderark, Kaye and dramaturg Catherine Miller at the helm of the process.

“As actors, devisers and the main content generators, it could get chaotic,” Phan said. “The leadership was able to finesse the process. Collaboration is great, but you really need someone to lead the way.”

The devisers would work with Vanderark to change the script over the course of three weeks. Vanderark said that being separated from the process in between the first draft and final draft highlighted “the joy it was to collaborate.”

“I came in for a stumble through and I could hear the little footprints of everybody’s voices,” Vanderark said.

According to the cast and production team, casting the parts was a surprisingly smooth endeavor. The night before discussing role assignments with the actors, Lubelfeld and Vanderark met to lay out who they thought would be best in each role.

“The next day, it was almost as if I had scripted the moment, as if I had told them ‘this is what I need you to say back to me’ because the actors repeated everything we had thought out,” Lubelfeld said.

Vitaterna credits this easy process to each actor feeling so personally connected to each character.

Inspired by the themes

Each of the “YIZKOR” team members were drawn for various reasons to producing “Lebensraum” and then the revised project.

Lubelfeld and Vitaterna felt a shared connection in how strongly they were shaken by the Charlottesville riots. Vitaterna was drawn to devising because it was a part in the conversation of making art in the #MeToo movement.

“I was drawn to the decision to abandon a monstrous man’s fabulous work in favor of creating an equally poignant, high-quality and similarly-themed work,” Vitaterna said. “It was a work that was created out of a safe and diverse room.”

In a similar context, Garcia was particularly touched by the diversity of the production.

“Once I was cast and saw who was going to be in the play, it really hit my heart,” Garcia. “This is terrific because it’s so inclusive. In the years I’ve been [doing theater], I get stereotyped for being Puerto Rican. You know, that sort of thing that is just really narrow minded and really irritates me. So coming into this was very refreshing. It’s hopeful for the future and for the vitality of the theater in Chicago.”

Phan was drawn to the overall themes of the revised project, which included the idea of inherited trauma.

“When we shifted to the devising project, I was really struck by the possibility that we would be exploring the connection between personal, familial pain and drama as it is connected to a collective affliction,” Phan said.

After the current run of “YIZKOR” finishes, Anaemic Theatre may discuss a continuation of development on the play—but only if everyone on the devising team agrees to it.

“But first, I want to get done with this run,” Lubelfeld said. “Because of the collaborative efforts, it really does belong to every one of us.”

YIZKOR performances occur Friday to Sunday nights at Voice of the City, 3429 West Diversey Avenue through February 25. Tickets can be purchased at squareup.com/store/voice-of-thecity.