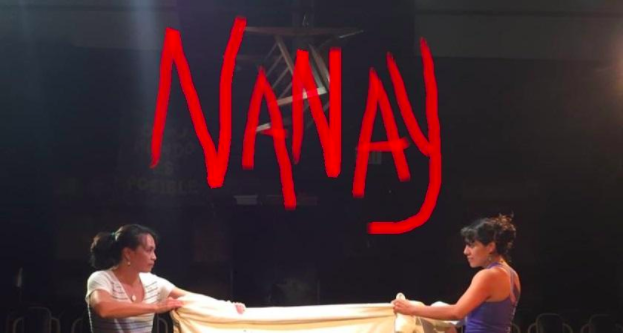 Permission to be Perplexed: An Interview with Lani Montreal

When Lani Montreal speaks, she is at once educator, mother, cancer survivor, playwright and DIY theater provocateur.  Consequently, when she writes poetry, we should all take note. I had the opportunity to interview her about her forthcoming poetry collection “FANBOYS,” and her responses, true to form, were those of a woman standing at once in many worlds.

It seems like only yesterday that I found her in the teacher’s lounge. She was wavering on one foot like a flamingo, practicing Tai Chi by the window. A bird’s eye view of a construction zone blinked and whirred, but she refused to let it disturb her zen. Likewise, her blue hair seemed to shift with the clouds. Yet seeing her work in a theatrical setting showed me how much energy and passion she invested in every hand gesture and every aching word.

I watched, mesmerized as she wove stories of the Philippines: a narrative of a mother and daughter tangled in a blanched white bedsheet, an army marching through the audience disregarding the fourth wall, a single woman dancing and mourning as though gravity was merely a suggestion.

This collection resonates so deeply with me for the way it tangles the variables of our lives. All at once, you tell the narrative of a cancer diagnosis, the perils of motherhood, and yet the poetic meter ticks onward keeping time with the composition classroom. Was cancer linked to motherhood and teaching in your mind?

Montreal: I think they are linked in the sense that I’ve come to accept everything as a learning experience. There is nothing less poetic about finding out you have breast cancer than through a call from your doctor while in line to pay for back-to-school stuff at Marshall’s. Yet, there it was and there we were. Motherhood and teaching raised the stakes for me, in being and in writing. When we write, we want to make sense of things, to understand who and where we are in any given context, and to figure out how we can become better versions of ourselves. I think the cancer just made it more urgent.  And the poetry gave me permission to be perplexed.

Can you speak a little about your process and how you balance your workload?  Does theater play a part in your poetry?

Montreal: I don’t think the workload ever gets balanced, but poetry underscores the aspiration to find balance. Poetry comes sometimes when I’m grading papers or planning classes, and many times when I’m attending a faculty development workshop. As for theater and poetry, I think theater is staged poetry in a sense; all these visual and auditory elements coming together to capture a moment –mise-en-scene.

What does DIY theater mean to you?  I know that you have included your daughter as an actress in your work!  What do you think DIY theater does for her, or for all of us?

Montreal: A community theater group called Pintig was the circus I ran away with. I was smitten. We based our theatre practice on Augusto Boal’s ideology: theater as meaning-making and as an act of resistance. We use theatre as a way to promote social justice and to build community.

I love sharing my work with my family. I take the kids to community arts events all the time and I think it helps them find their creative voice. It also allows them to see the importance of community and the role that the arts play in community-building. I always reiterate how true wealth lies in the connections you make with people.

Can you speak a little about your production, “Night of the Living Moms”?  What in your opinion is the role of these woven narratives in a society filled with social media avatars and motherhood memes?

Montreal: The project was aimed at bringing Chicago artists together in a theater performance that explores the theme of motherhood as complicated by art, the academe, and activism. I wanted to give voice to the stories of marginalized mothers—queer/lesbian moms and mothers of color, which are often not included in the motherhood memes.

Can you speak to the theme of gender and queer identity?  Why do you feel it is important to tell these stories?

Montreal: I believe it’s important for marginalized artists to tell these stories because Cameron McKintosh might make a Broadway hit about it if we don’t. I identify now as a queer Filipina writer in America; yes, I am married to a man, but it doesn’t make me less queer. It took a lot of time and courage to come out and write about my experiences. I used to just write around it. I agreed with Ta-Nehisi Coates when he said, “Writing is an act of courage. It’s almost an act of physical courage.” Once I came out to my mother, writing about it was no longer therapy; it became a necessity and a responsibility.

What role does your Filipina identity play in your work?  Do you find yourself code-shifting?  Do you write for a specific audience when you write about the Philippines?

Montreal: Tagalog is the language I was raised in, and in my most vulnerable moments, I revert to it, though less and less now, I notice. I actually curse in English now. As a Filipina in America, I always feel like I have a responsibility to tell my truths, and at times, my writing gets too didactic. I think that’s part of the challenge, to see my audience not as students but as part of the story. In my plays, the fourth wall gets broken a lot so actors could talk to the audience and not at them.

It’s been awhile since I wrote a poem in Tagalog, and I wonder if that’s what it means to assimilate and if it’s a bad thing. It makes me think about US President William McKinley’s policy of “benevolent assimilation” towards the Philippines when he sent his army to conquer us but to do it “nicely.” (Well, the Philippine-American war still claimed over 200,000 civilian Filipino lives.) As a consequence, English has been the language of instruction, of commerce, and of the legal system in the Philippines. I guess we’ve been code-switching from the day we enter kindergarten, so then it has become part of who we are.

I know a lot of Filipinos and Filipino-American artists who also deal with internalized colonization in their work, and a lot of it is just to make sense of being/living in the belly of the beast whose foreign policy continues to impact the lives of Filipinos everywhere.

One of your poems parrots the assessment of a student paper: “Tasha good job / with your grammar—subject verb agreement, absence / of run-ons – but I am a little confused, / did you actually see the shooting? / Because if you did, it’s not very clear; / what happened when you realized, / they were never coming back?” (12). This is so painful and honest, and something with which every teacher resonates, this misplaced emphasis on grammar when the content breaks your heart. Do you feel that sometimes teaching, or words, fall short?

Montreal: As a way to de-stigmatize writing, I encourage students to write about their experiences. Often, they write about their struggles as single moms or about coping with the murder of a loved-one in one of Chicago’s blighted neighborhoods. Some instructors discourage this kind of narrative writing altogether to avoid having to deal with the dilemma. I see it as an opportunity to connect with students on a human level.

When she was diagnosed with cancer, Montreal was resolute. She bravely wrote through her treatment, infusing the healing properties of poetry into her recovery. She embraced motherhood and queerness and the open air at Djerassi. She wrought metaphors through clenched hands like wings.

Montreal taught me to embrace my “perplexed.” She taught me that every room has a window, if only we know to look for it.

And she taught me that no matter what plot twists await us on the next page, it is possible to balance on one foot, pink as the day we were born.

Lani T. Montreal is a Filipina educator, writer, performer and community activist based in Chicago. Her writings have been published and produced in Canada, the US, the Philippines and in cyberspace. She has a forthcoming poetry collection “FANBOYS,” which will be out May 2018.