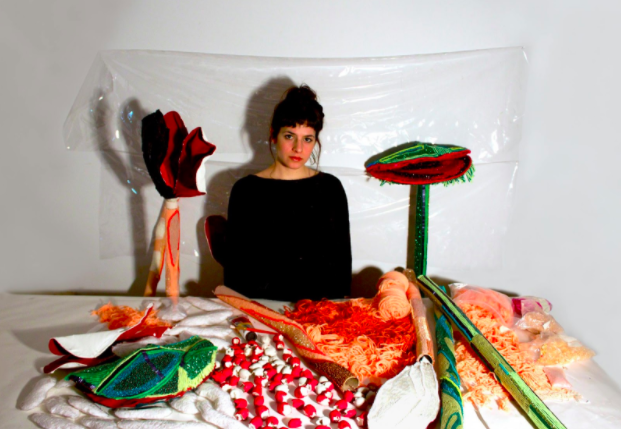 Death and the Maiden: Mariel Harari Makes Art Out of the Apocalypse

As humanity lumbers through increasing numbers of climate catastrophes, I’ve become interested in how the impending end of life on Earth mediates artistic practice. The era we are currently enduring is called the Anthropocene; it is characterized by human-incited, environmental upheaval. What is art’s role within this era? Chicago-based artist Mariel Harari’s multivalent performances offered some clues.

It demanded to be approached on its own terms. Eyeless, it leered from the dead center of a tile cross on the floor. Some participants filed down the black and white checkered tiles. Others tip-toed around synthetic spires of ‘grass’ that fill the space around the cross.

Surrounded by parishioners, the Deity began an infernal dance. It swayed with its acolytes; it shook with them; it leaned into their hugs; it reciprocated their every move.

Up close, it became clear that the ‘flesh’ was made of yarn and that a human eye peered through a tiny hole carved into the top of the mass. Discovering Harari inside the sculpture intensified the encounter. Her range of motion conformed to the limitations of the suit, and these limitations were the fulcrum of her movement. Imprisoned in (or as) a suit of skins, Harari’s debilitation gave rise to her mobility. The “Flesh Deity” implied no self beyond the embodied self, no soul deeper than an amalgamation of meat.

Squiggles of veiny yarn cut through monochromatic organs, permitting them neither uniformity nor self-containment. Unspooled in wild patterns that recall the expressive intensity of a toddler scribble, the arteries emphasized the facticity of the flesh as perishable. They engorged the ‘flesh’ with bulk and pulse, with the possibility of an embolus that could end it all.

True, this ritual performance occured on a tile cross, a sigil that overflowed with religious and occult connotations, but “deity” hints at something grander than the proximal, something skyward and sublime.

Framed by the Anthropocene, the “Flesh Deity” sanctified the dead and the dying at prodigious scales, spawning all kinds of brutal associations. It evoked, for instance, the ghosts of 55 billion pounds of cows, pigs, and chickens that are legally quarantined and slaughtered for human consumption every year and anticipated the pounds of human flesh that will be shed to sustaining such a system. The Deity’s dance became an effigy of excess, of the surplus flesh and violence symptomatic of our historical situation.

It is tempting to view this performance as critique, but critique can enact a distance from its subject. It can posit an outside, a supercilious box seat from which the spectacle is safely gazed upon. The slaughter of cattle is co-constituent of the same economies that embolden the “Flesh Deity,” that summon its audience, and empowered me to write about it. We move in tandem with the Flesh, in flagrante delicto, entwined with the crime of being alive.

Of her own aesthetic predilections, Harari told me that she prefers to consume and create art as a means of escape.

“It is sugarcoated, a fairytale to escape to,” Harari said. “But one with underlying hints of horror, trauma expectations and anxiety.”

Her doppelgänger bursts into a dream pastoral where time flows in stop-motion glitches. Like an entrance into a dream or a lagging livestream, Harari’s origin point feels obscure. It seems like she was already there, like the temporal situation was preemptively rippled by her presence and could not be wrested from its feedback loop.

The natural world of the film suffers similar spookiness. Already tainted by human waste, the landscape betrays any promise of respite. The contaminants conflate with the contaminated far beyond any hope of extrication. Writer Joyelle McSweeney calls this kind of noxious vale a “Necropastoral.” In “Bitter Root,” the natural and unnatural coalesce as fetid “cow flowers,” tall plants with stalks like hot dogs and snapping maws of bovine fur.

Harari displays humanism as a poison and shows that nature could care less about the plights of humanity. She rips off a petal and chomped down. The plant bleeds in red strands of yarn. Chaos reigns.

The plot feels fantastical, but fantasy does not always permit escape. After Harari slurps down the last driblets of blood-yarn, the cow flowers disappear and she stares dyspeptically at the camera. Suddenly, a pair of anterior teats popps out of her chest. This protuberance is followed by another and another, generating a full set of udders.

The implications are prismatic: Harari is at once sexed and hybridized, socialized as categorically “female” but exceeding that category in her animalism. She is inextricably linked to the toxic environment as both a victim and a benefactor.

Living through the Sixth Extinction—in which the biological annihilation of non-humans is well under way—performances that explore relationships with other animals strike a resounding death knell. Harari is not alone in her experiments, but her compositions are particularly fatalistic. She murders all the mutant flowers at the end of the movie, and then the movie begins again.

For many scientists, we are past the tipping point. No longer a matter of unsustainable, we are simply unsavable. As Roy Scranton sums it up bluntly in his 2015 book on the Anthropocene, “We’re fucked.” Energized by its own futility, art becomes desperate and volatile. Harari’s works are among the best, elegizing the world and the worlds it could have been.

Logan Barry
Logan Barry (he/him/his) lives in Chicago with Eileen Colwell, a hospice nurse and Chomp, a shih tzu. His writing and performances have been featured in Belt Magazine, Mana Contemporary, the Poetry Foundation, the University of Notre Dame, the Old Capitol Building in Iowa City and other places. He is interested in unnatural theater.

Logan Barry
Logan Barry (he/him/his) lives in Chicago with Eileen Colwell, a hospice nurse and Chomp, a shih tzu. His writing and performances have been featured in Belt Magazine, Mana Contemporary, the Poetry Foundation, the University of Notre Dame, the Old Capitol Building in Iowa City and other places. He is interested in unnatural theater.
More from ImpressionsMore posts in Impressions »
More from UndergroundMore posts in Underground »