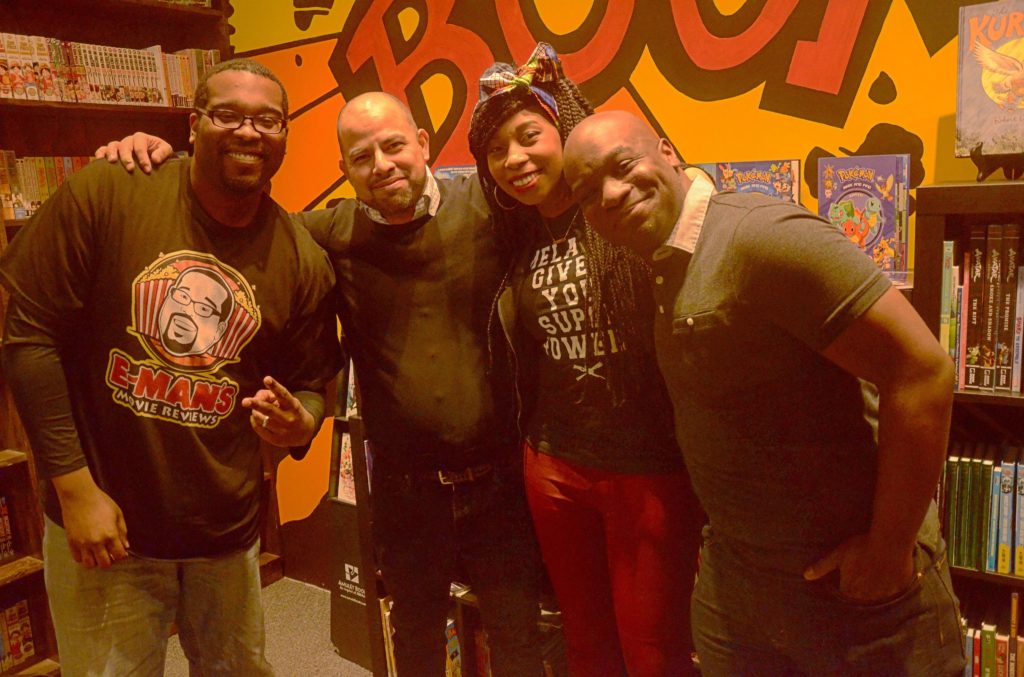 On March 27 community members of Chicago’s 40th Ward met for an open discussion of the record-shattering, cultural phenomenon Black Panther. The conversation was organized and moderated by Andre Vazquez, Executive Director of Chicago Progress and 40th Ward City Council Candidate who, like many of us, felt a strong connection to the movie and wanted to bring his neighborhood together to talk about the impact this story has had on our community and our world. When speaking on his inspiration for the event he touched on different ways to get all members of the community involved.

The well-rounded panel featured professionals from various backgrounds who were able to provide insight from multiple perspectives. The panelists were Ibie Hart, a community organizer with Common Cause IL, Ike Holter, an award-winning Chicago-based playwright, and Emmanuel “E-Man” Noisette, a film critic, blogger, and comic book fan.

The drums of Wakanda began to play as the owners of the venue, Alleycat Comics, opened the discussion with a few words about the comic book world. Even though the Marvel and DC movies have been able to bring some classic comic book characters to a wider audience the genre is primarily fueled by the new work being produced by independent artists. Alley Cat Comics has existed for close to seven years and the largest number of comics they sell are from independent artists.

“[There’s] amazing diversity of stories and characters in the independent section, they can do whatever they want to,” said Selene Gill. “Nobody is telling them no, nobody is censoring them, nobody is stopping them. So, if you are a hard-core Marvel or DC person, maybe you should try a little of the independent.”

Vasquez went on to ask the panelists if they had any initial thoughts they wanted to make sure they covered in the discussion. Hart brought up how one of the big responses to the movie was “black women, they’re so powerful” but “in every day society when we say that we don’t treat them like that.”

Holter wanted to discuss whether T’Challa was truly the hero of the story.“This is one of the rare movies that has this very compelling villain, but at the same time makes you question why the hero is so heroic and if he is.”

Noisette wanted to make sure the panel covered the “unprecedented” cultural impact of Black Panther not just for black people, but for everyone around the world who saw it.

While discussing the women of Wakanda the conversation inevitably turned to Killmonger and whether he was truly a villain or just villainous in his tactics.

“I was a fan of [the female characters] but there was a whole other layer of my Facebook that was like Killmonger is everything, he’s the one that’s tearing down the borders, and I was like, Nakia said that at the beginning of the movie,” Hart said. “She was strategically doing that the whole time versus he just beat a bunch of women.”

In response to the comments on Killmonger’s violence towards women in Black Panther parallels were drawn between him and Nakia. An audience member believed that Nakia’s displays of violence weren’t significantly different than Killmonger’s, but the panelists maintained that Nakia only used violence when necessary and never for the sake of pure terror. However, everyone was able to agree that Nakia and Killmonger’s desire to use Wakandan resources was revolutionary considering the long history of Wakanda hiding from the rest of the world.

The concept of Wakanda choosing to stay hidden spurred an interesting conversation on whether we are truly responsible to other people simply because they share a facet of our identity.

“Looking at it from an American perspective, that conversation is new and has never properly been handled,” Holter said. “I’m used to going into spaces, especially on the Northside of Chicago where I’m one of few people of color here. So, when I see anyone else it doesn’t matter where they’re from, I’m like ‘You’re my people, I’m going to fight for you’. Going to Wakanda it’s like ‘Oh, different rules apply here.’”

In recounting their initial experiences seeing Black Panther for the first time some of the panelists became emotional reflecting on the impact that this kind of representation had on black people specifically.

“It was Christmas for me,” said Noisette. “There aren’t a lot of minority critics. I’m sitting next to all these older, white men and I’m like ‘YES! GO! KICK ‘EM! COLONIZER!’I did not care, professionalism be damned because I needed this moment. Growing up as a young black boy, I felt stupid trying to dress up as Superman or Batman. While my friends could put on the most minimal stuff and everyone would be like ‘Oh, you’re Green Lantern. Emmanuel what are you? Captain Africa…’ Stuff like that matters. Movies play a role in our lives, and depictions play a huge role in our lives.”

You can check out AlleyCat Comics on their website here, Andre Vasquez on his facebook page here, you can check out Emmanuel ‘E-Man’ Noisette’s work here, Ike Holter’s upcoming premiere of ‘Indecent’ at Victory Gardens Theater here, and support Ibie Hart and Common Cause here.

You can listen to the entire conversation here.