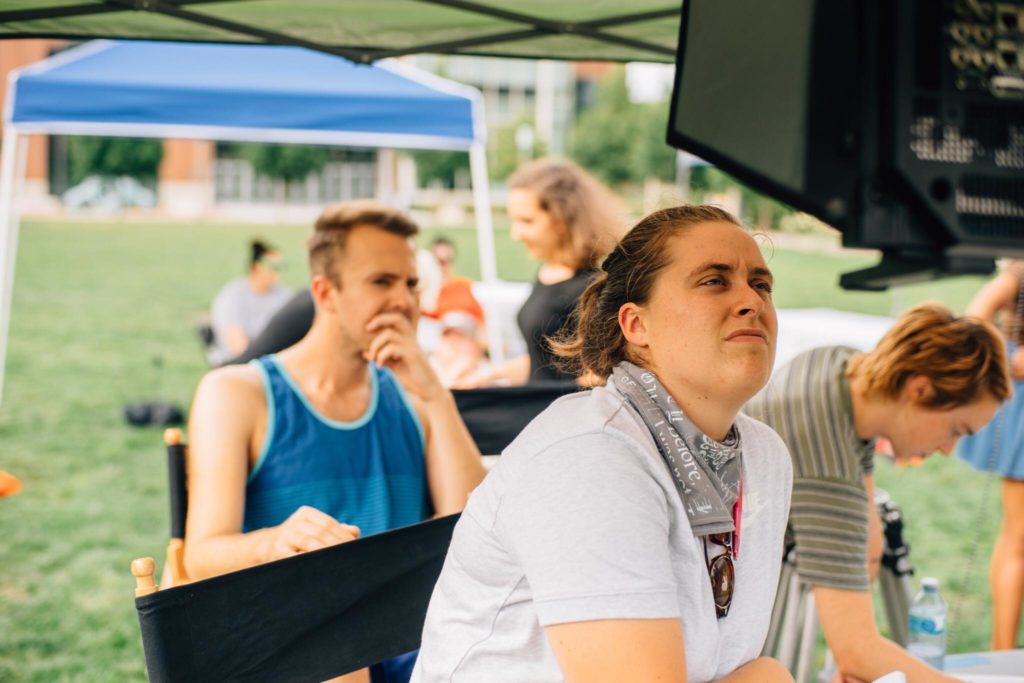 “Even in a time as tumultuous as now, we can still create art that is funny and self-aware,” Welever said.

As a web series made entirely by women and queer folx, Kappa Force promises to be intersectional feminist fun with a literal kick. The photos and clips feature strong women clad in neon and kicking major butt.

“Without fully giving it away, there is an inevitable showdown between good and evil and once sound and VFX and score were added it truly became something transcendent. Also I just love fight scenes and our fight choreographers Kai Young and Jon Beal combined with our DP Taylor Russ created an incredible looking sequence that is truly unbelievable.”Heimann said.

Welever, Creator Addison Heimann and co-producer Emilie Modaff agreed that Kappa Force also features many throwbacks to the campy television shows of the ‘90’s and early 2000’s, while keeping current with millennial topics.”

“Kappa Force is an ode to the ‘90s, with a lot more ass kicking, intersectional feminism and action,” Modaff said. “It’s like Marvel meets 10 Things I Hate About You.

The story of Kappa Force originated in the brain of Heimann in December 2015, when he sat on his couch, eating bowls of Totino’s pizza rolls “like they were popcorn” and came up with a world that he couldn’t get out of his head.

“Kappa Force is the love child of my depression brain and my obsession with strong female sci-fi/fantasy,”Heimann said. “It was the first thing I wrote that I knew I had to make, no matter what.”

Heimann asked Modaff if they would be interested in producing the series with him. Modaff then connected Heimann with Welever, who is Modaff’s “creative collaborator and the love of [their] life.” After Welever signed on, she brought together the team and they began filming within months. For Heimann, however, this project did not become “real” to him until 4:30 AM on the final day of shooting.

“I was half drunk off of champagne and tiredness when I realized that this lonely idiot convinced people who were way smarter than him to make the thing,” Heimann said. “I created the skeleton, but [Welever] and the 80 other people who have now touched it made it fully realized.”

Heimann recognized that Kappa Force might not have the most original concept, but he specifically wanted to highlight its mission of inclusivity.

“Kappa Force is a story that will seem familiar with new faces in the roles of the heroes and the villains,” Heimann said.  “I want to live in [a] world in which a woman can be an incredible hacker and [a] kick-ass superhero, but also spend the entire series wondering why she keeps farting. People contain multitudes, and showing those layers on screen is extremely refreshing.”

In particular, Modaff thought it was important to highlight how women are typically portrayed in media and in life.

“Women are often represented as a monolith,” Modaff explained. “Victims. Sexual objects. Secondary to cis-men. Kappa Force represents all kinds of women, without placing them in stereotypical boxes. I’m done with shows that cast non-white, non-cis, non-straight people and then give those characters a plotline based only on the fact that they aren’t white, cis- or straight. People are so beautifully complex, and I think Kappa Force does a really good job of representing people as people and not as tropes.”

Heimann pointed out that though these stories are more prevalent today, the storytellers still lack diversity.

“I want to see more movies and television that play with the idea of tropey stories retold through diverse eyes,” Heimann said. “The more we normalize this kind of storytelling, the more pervasive it can be.”

Despite the show’s promise to give audiences food for thought and discussion, the team’s main goal is still to entertain.

“I just want people to laugh,” Modaff said. “There isn’t a whole lot to laugh about right now. Though I believe that art should motivate progress and ignite change, ask tough questions and spark difficult conversations, I also think we still need silliness.”

Modaff pointed out how Kappa Force is set within a collegiate and Greek life setting while exposing the “the insidiousness of toxic masculinity and misogyny, all through a lens of parody and farce.”

“It gives audiences a chance to root for the feminist heroes while also laughing at fart jokes,” Modaff continued.

Modaff and the team also root the Chicago-based cast and crew and what they have brought to Kappa Force. They are proud of what the young Chicago artists have created over their week-long shoot.

“Chicago is a powerhouse of a city,” Modaff said. “Most of our cast and crew are based in (or got their start in) Chicago and many of the bands featured on the Kappa Force soundtrack are local Chicago musicians.”

As Chicago-based artists themselves, Heimann and Modaff recall their own challenges in creating a show together and getting their initial starts in the industry, overall.

“Just do it,” Heimann advised other artists. “At the risk of sounding cliche, you just have to build it yourself. Don’t ask for permission. Make the damn thing. It’s so much harder, but also completely worth it.”

While the official release date is still undetermined, the show is in post-production. The creative team is expecting a screening in late April and another public screening in late May. For more information visit kappaforce.com.