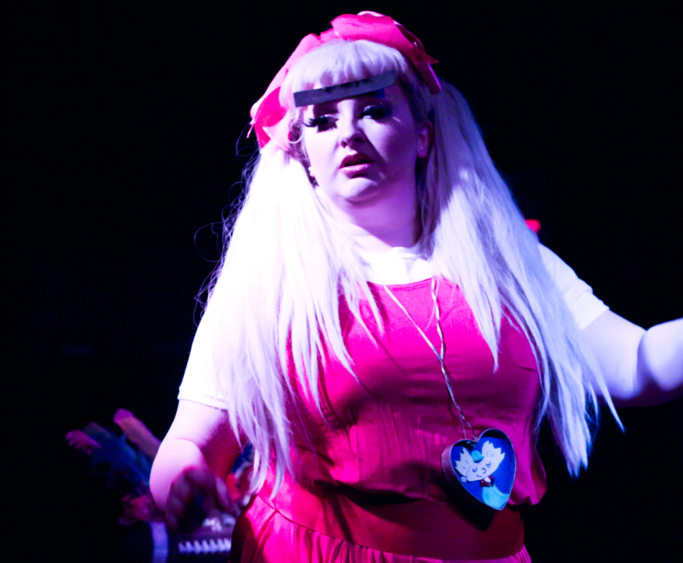 The Sexy, Empowering Fandom: An Interview with Nerdlesque Performers Heather and Lace, Lottie a la West and Stevie Kinks

Growing up, I was a very quiet and extremely introverted person. I didn’t feel beautiful growing up, from reading glamour and fashion magazines and watching reality TV. From looking at those mediums, the only image I had in mind was to be thin and maintain a 120-pound weight. I thought that this standard beauty norm and the only way people would accept me for who I am. As I got older, I was able to break out of my shell and love myself more. I was not going to let magazines and entertainment dictate who I was (and am) and the way I should control my life. In 2014, I moved to Chicago, and it was one of the best decisions I’ve ever made.

I’ve been a part of the burlesque community for two years and because of it, I’ve gained self-confidence onstage and in real life. Unlike strip clubs, burlesque elevates the striptease to an art form. I had never heard of it before coming to Chicago. I auditioned with a burlesque theater company and it was a great decision for me.

Like all performing arts, burlesque has multiple styles to it. This company’s forte is nerdlesque, which is an offshoot of burlesque, in which performers dress up in cosplay as a certain character in TV, film, literature, anime or other types of media. They also build a story with the character and a song. Since the performers come from a theater background, they produce full-length productions that are sexy parodies of popular series like Star Wars, Game of Thrones, and Star Trek.

What I love most about the community is the performers. They are welcoming to everyone, from cis-heteronormative to LGBTQIA+ folx. They don’t care where you come from and they always have your back.

When this company closed due to poor management by an awful human being, the performers and I banded together to form our own company: PS Burlesque. We took our values as performers and brought it to PS. We wanted cis & trans women+ to take charge and make a difference in the burlesque and theater community.

I interviewed fellow PS Burlesque company members, the artistic director Heather and Lace, social media manager Lottie a la West and newcomer to the burlesque scene Stevie Kinks. I spoke with them about what burlesque means to them and how they create their acts.

What does burlesque mean to you?

Heather and Lace: To me, burlesque is empowering. It’s a malleable art form that has a meaning to everyone.

Lottie a la West: Burlesque means finally accepting a part of me that I never believed existed. It’s celebrating everything that makes you shine onstage.

Stevie Kinks: To me, burlesque is sexually infused performance art.

What’s your definition of nerdlesque?

Heather and Lace: Nerdlesque is taking your favorite fandom and giving them the ultimate tribute by taking off your clothes.

Lottie a la West: Nerdlesque is sensually any sort of burlesque act that has a fandom base, so you could really stretch and say it can be anything from a Broadway-style song to your traditional Star Wars/Star Trek characters. This could all be considered Nerdlesque.

Stevie Kinks: Nerdlesque is burlesque inspired by anything in popular culture, whether it be books, video games, movies, etc. I cannot remember who said this quote but they said burlesque is “sexuality with a wink.” And something I love in burlesque, and especially nerdlesque, is finding the humor and sexuality in these characters.

Why do you love it?

Heather and Lace: I’m in control of what I want to do. I get to create and produce my own acts exactly how I want them. And I don’t have to deal with someone dictating me on how I do it.

Lottie a la West: It gives me the ability to delve deeper into some of my favorite characters and play roles that make me super happy. I can develop a part of my burlesque persona that’s a little different, interesting, strange or new.

Stevie Kinks: For me, sexuality and humor aren’t always mutually exclusive—I have a dirty sense of humor and I enjoy mixing that with my sexuality. Confidence and humor are sexy, even if that person is dressed up like a video game character. Also, it can be such a testament to the performer’s imagination, both in a sexual sense and creative sense, but that can be said for all burlesque.

How do you create an act?

Stevie Kinks: If I am starting from scratch, it’ll usually start with the song. I get lost listening to music, and with some songs, I’ll instantly think of a performance idea for it. From there, I’ll listen to the same song 30-3,000 times and will expand those initials ideas into something. I’m a choreographer, so I will think of the movements responding with the music and vice versa—a hip bump on the drum beat, a shimmy on the fast part, a pasty reveal on the end chorus. But truly everything changes once I stand up and practice it with the garments and with the props. From there, I can find more moments (funny and sexy) and get a basic blueprint of what I want the act to be. Realistically though, the act will be different once I’m out on stage. I love the connection to the audience in burlesque—either I’m feeding off of their amazing energy and I’m soaring through the act on that high. Or maybe the audience is a bit shy, so I enjoy getting them riled up.

What’s your favorite act to perform on stage?

Heather and Lace: It’s a new one that I debuted in March 2018: my Lady Amalthea from The Last Unicorn. It was one of my favorite movies growing up. I get to do the pointe technique from ballet, which I’ve done in previous acts, as well. Another new act that I created in March 2018 is called Pointed Lullaby. It’s a darker piece about control performed en pointe.

Lottie a la West: My favorite act is my Charlotte act from Princess and the Frog. She’s kind of a little-known character, so people recognize the story after I explain it. Sometimes, it doesn’t really read through, but it works really well as an act because you don’t have to know who the character is in order to really enjoy it. I love my dress for it because it’s covered in about 20,000 rhinestones and has a hoopskirt. It’s just this huge presence. Every time I do it it’s so goofy and fun and energizing that I love myself so much afterward.

Stevie Kinks: I don’t have too many acts under my belt at the moment, but I want to say my Principal Mullins act because I just recently performed that. But my true favorite was when I played Eleven in Stranger Thongs: A Stranger Things Burlesque. That was my first time performing burlesque and a lot of Eleven’s movements were slow—which is not a speed I’m used to operating at—so it really pushed me to let myself live in the moment and feel my oats on stage.

How do you research an act you want to create?

Heather and Lace: My main source material is watching a lot of clips on YouTube. I would binge-watch whatever I can to get an appropriate representation of the character. For my Marie Antoinette act, I watched a ton of Marie Antoinette documentaries that were streaming on YouTube because I wanted to get her character right. As for designing the costume, I would go on Pinterest and find photos that fit the character the best.

Lottie a la West: I tend to really get an idea for a few different characters at a time. A lot of my songs have come from the Sirius XM channel alt nation; a lot of the songs are super catchy and not super well known, but have a little lyrics that you could relate to various characters. To make my act appropriate, I usually watch or listen to whatever sort of source material I have as much as I can. I look for a few base pieces of costuming and I try to make sure that it’s something that relates to the character I planned out. I start to get a mental picture of what I’m gonna do. I usually look at whatever fandom’s Wikipedia page there is for the character and try to learn as many things as I can in those teeny, tiny details that really, really makes your act stand out. As far as I know, I’m the only person who does Charlotte act, but if there were other burlesque performers doing that character, I would want to make sure that my concept was not too close to theirs, so I could make it my own.

Stevie Kinks: Research for the role is watching the movie (if applicable) and just finding inspiration from there. For my School of Rock Principal Mullins act, at first, I contemplated getting a very similar outfit from the movie and possibly straightening out my hair or even getting a wig. But then I realized I’m playing a character through the lens of Stevie Kinks, so my Principal Mullins was living that 1950’s-uptight-pencil skirt-wearing fantasy with my natural curly blonde hair. I incorporated one or two dance moves based off of her dance movements from the movie as well. Also, realistically, I am at the mercy of the thrift store gods. In the words of Tim Gunn, you just “make it work.”

Burlesque is never a negative experience when you get on stage. You get to show off how beautiful you are from the inside and the out, and that’s the most important thing.

PS Burlesque will be performing as a part of the Chicago Nerd Comedy Festival on Friday, May 18 at 11 PM at Stage 773 1225 West Belmont Avenue. Learn more information about the event at facebook.com/events/174206333240869. PS Burlesque will be having their Pride Prom Cabaret on Saturday, June 9 at 9 PM at Chicago Theater Works 1113 West Belmont. Tickets can be bought at chicagotheaterworksllc.thundertix.com/orders/new?performance_id=2056443. More information can be found on their Facebook at facebook.com/psburlesque.