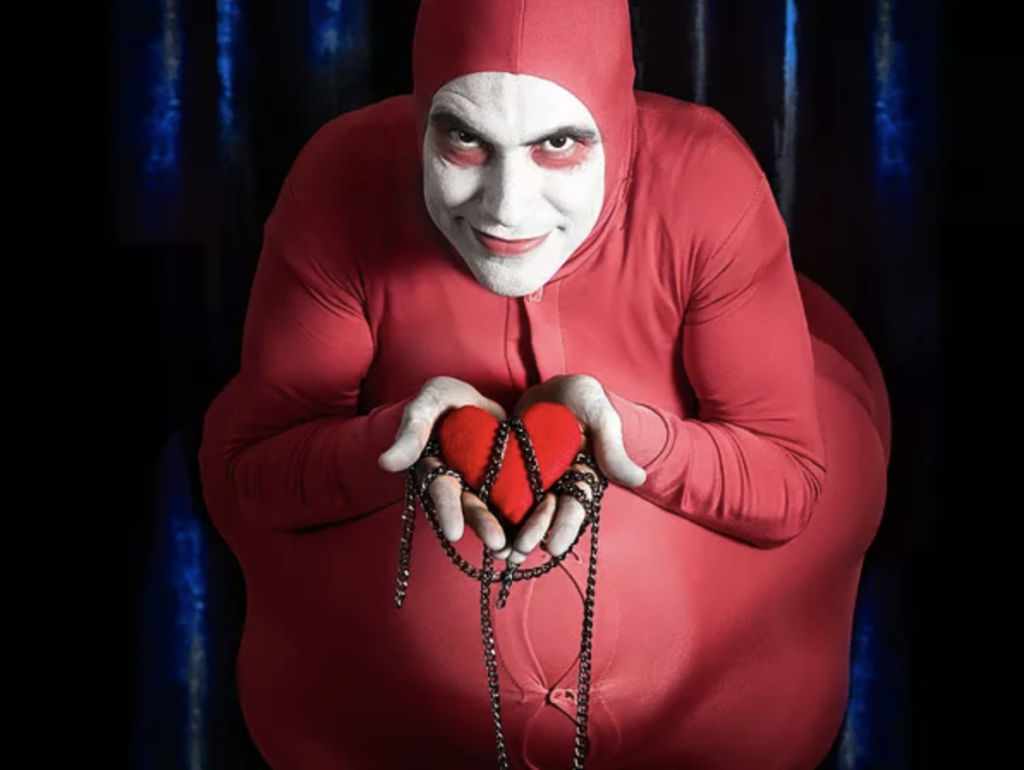 Something is Happening in Chicago: Riding the Wave at Chicago’s Physical Festival

Pictured above: A promotional photo for The Red Bastard: Lie With Me, co-written and performed by Eric Davis and directed and co-written by Aitor Basauri/Photo: Posted by Physical Festival

On Friday night, a misshapen red-eyed clown named “Red Bastard” licked his lips while tearing apart the lies that underpin our conception of love. He was the opening act for the annual international smorgasbord of international theater taking place at Stage 773. [1] From June 1-9, the Physical Festival hosts clowns, dancers and physical storytellers from Chicago and around the world. In doing so, the festival aims to establish Chicago as a destination for the creation and consumption of physical theater.

Before discussing the festival and its founders, it is useful to know a little more about the style of physical theater. This is tricky because as a term, “physical theater” is notoriously hard to define. After all, isn’t all live theater in some way physical? The Festival’s co-artistic director, Marc Frost described it as a style of theater that “communicates through the language of the body in a less word-based way.” However, even he acknowledges that such a dialectic between physical and text-based work is far from clear-cut; one of the headlining acts of this year’s festival is based on the decidedly wordy Don Quixote. Still, the extensive use of the body to communicate across language barriers remains a standard of physical theater.

In the grand scheme of theater history, “physical theater” is far from new. In the East, Noh and Kabuki theater have been performed since the 14th Century. In the West, clown and Commedia dell’Arte–with their emphasis on physical embodiment of archetypal characters–were instrumental in shepherding theater out of the Dark Ages. In fact, one could point to traditions from everywhere from India to Mesoamerica to note that physical theater is both ubiquitous and ancient. Yet, the style is undergoing a major facelift. For several decades, theater companies across the world have been exhuming and repurposing these museum-pieces to find new modes of expression. New schools emphasizing physical pedagogy have emerged from France to rural Northern California. Mask performers tour the fringe circuit. In many ways, the forms that led the West into the Renaissance are undergoing a renaissance themselves.

It is this revolution in theater-making that brought the Physical Festival’s co-artistic directors Marc Frost and Alice de Cunha to Chicago. The two met at the London International School of Performing Arts, where they bonded over a mutual love of physical performance styles such as clown, mask and bouffon. So, they got married–as people who bond over mimes do–and searched for a place to settle down. Though Frost was a native of Chicago, he was at first hesitant to return. Chicago is an improv town, more known for yapping heads than resonant bodies. Frost believed, as many do, that Chicago was a place for people to study comedy, then leave. Still, he returned and set his roots, creating experimental theater vessel, Theater Unspeakable. Eight years later, Theater

Unspeakable has toured the country, performing in venues from New York to San Francisco.

To be sure, Theater Unspeakable was not the first physical theater group in town. Festivals and groups have been popping up for decades. The International Theater Festival of Chicago attracted experimental, controversial work throughout the 1980s and 1990s. Clown group “500 Clown” hosted a festival during the late ‘aughts. Frost describes these festivals as “waves” that incite new performance groups to coalesce, and coalesce they did.

Five years ago, Chicago’s physical theater community was arguably the wave’s trough. The International and Clown Festivals were long since defunct. In the festival’s first year, the Frost and de Cunha feared for the worst. They had just had their first child and were worried no one would come to see it. “We figured if no one showed up, we just wouldn’t do it again,” Frost remarked. “After all, we weren’t doing this for our health.” Through a “mixture of ignorance and arrogance,” they persevered, and people showed up. In their original 50-seat theater, they had to sit people on the floors. Frost and de Cunha “realized that people want this in this community.”

What explains the Physical Festival’s success so far? Frost initially points to the festival’s international appeal. The festival has always emphasized international talent. This year, artists appear from Spain, the United Kingdom, Brazil, France and even New York. Since the language of the body is “universal,” companies can speak a vastly different verbal language and still be understood within the bounds of the stage. In a city as diverse as Chicago, that broad reach is an asset. In a festival from a previous year, for example, Frost recalls a company from Denmark performed.

“We had people come from a Danish retirement community,” he said and laughed. “People were speaking Danish in the front row.”

By elevating voices from other cultures, the Physical Festival mines an audience of people distinct from the diehards with season-tickets at Steppenwolf.

“They come less because they are avid-theatergoers, and more for the culture,” Frost said.

Still, what Frost credits most for the festival’s success is the atmosphere of the Chicago theater community. In Frost’s view, Chicago is uniquely suited among the major American theater cities to incubate devised physical theater.

“It takes more time, and in the busy marketplace of New York, or screen-driven LA, you just can’t afford it,” Frost said. “In Chicago, you can subsist here and start to make work.”

In short, Chicago is more affordable than New York and Los Angeles, and in the economically unprofitable world of professional clowning, affordability is key. Still, Frost mostly credits the adventurousness of Chicago audiences for supporting the work.

“The thing about Chicago audiences is that they will support you and even if it’s a flop, they will come again,” Frost noted. “Having been through that myself… In New York, it’s so hard to get people’s attention and once you have it, you have one shot.”

The Physical Festival is largely dedicated to elevating those voices within the Chicago community. Though many of the headlining acts come from abroad, the center of the festival is the “Scratch Night,” where emerging Chicago theater artists are given ten- minute primetime slots on the festival stage. Additionally, most of the main stage performers teach workshops that are open to the public. In doing so, Frost and de Cunha hope to spark an interchange between local actors and international touring performers.

“We want people to know that there’s something happening in Chicago,” Frost said. “That there’s a community here that not only creates, but also supports physical work. That might be the ultimate mission of the festival.”

Physical Festival Chicago runs until June 9 at Stage 773, 1225 West Belmont Avenue. Tickets are $18 dollars for a single performance or $60 for a festival pass. For more information and the performance schedule, visit physicalfestival.com or call 773-327-5252. For those interested in donating, the festival is currently halfway to their crowdfunding goals. Visit physicalfestival.com/donate for more information.

[1] The author of this piece has always wanted to write “smorgasbord.” He would like to thank the Physical Festival for helping him check that off the bucket list.