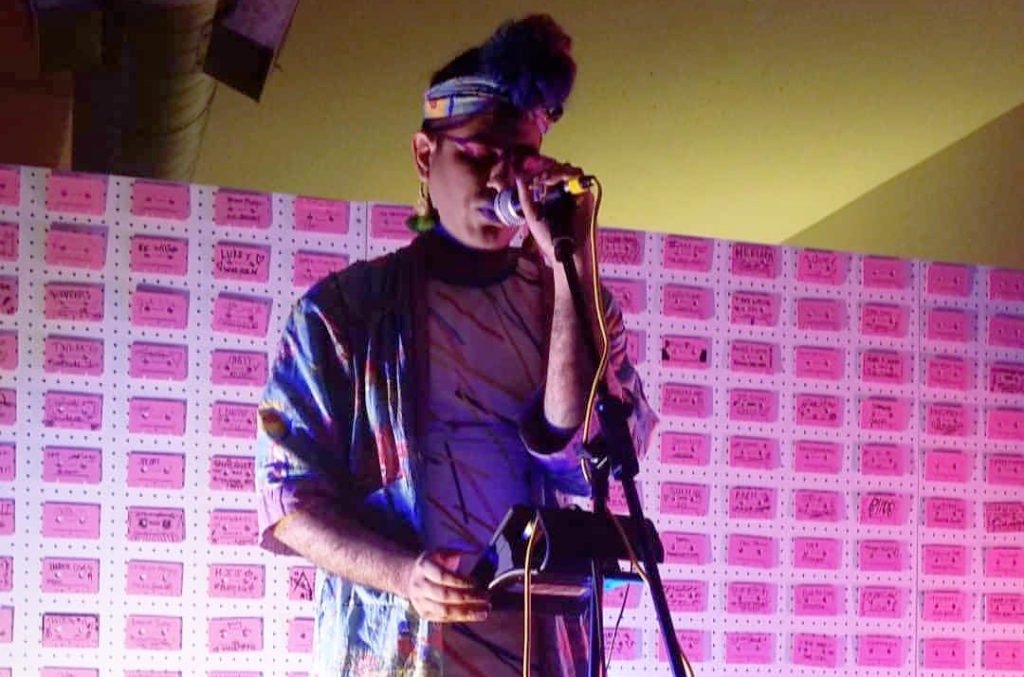 Life as a Form of Art: Meditations on Alok Vaid-Menon and LaSaia Wade’s Femme in Public

On June 19 at AMFM Gallery on the South Side, gender non-conforming writer, educator and performance artist Alok Vaid-Menon and activist, organizer and director of the Brave Space Alliance LaSaia Wade hosted Femme in Public, an evening of comedy, poetry and performance.

The gallery’s walls are covered with art created by emerging and established artists around the Chicago area. Colorful illustrations and powerful words surrounded each audience member as the space packed to capacity at 8 PM. The evening set out to examine the politics, facets, pains, triumphs and ancestral roots of femininity. In addition, many of the proceeds collected from the event went to the Brave Space Alliance, the first Black-led, trans-led LGBTQ Center located on the South Side.

Activist, organizer and director of the Brave Space Alliance LaSaia Wade opened the event with a story of how she became involved in activism. She was accompanied by music and two dancers and performed a piece in which she responded to the audience call “Yes Mother” with their own poetry: “I am mother/I am she who reigns/I am she/I am mother/I am star/I am what came from Earth.”

Vaid-Menon followed Wade’s performance, opening with a moment of silence. Throughout their performance, they incorporated tones, whispers and phrases to repeat on a looping device. Their performance began with a song, in which they repeated the question “where do all the sad girls go?”

Then, they performed a comedy/shade/reality piece in which they paralleled politicians as “drag queens for heterosexuals,” called 2017 the “Year of Face Masks,” called out Hillary Clinton and Hilary Duff, took back chartreuse, dragged white feminists and “equal opportunity war,” called to an end for think pieces and questioned how they could drag Trump without also dragging monsters, animals and aliens.

They seamlessly transitioned in and out of comedy, anecdotal stories (sometimes fictional, sometimes real), poetry and music. The last section of their performance entailed them reading and performing poetry from their newly-released poetry chapbook Femme in Public.

Activism at the intersection of self-expression

Appearance and self-expression as a form of activism is complicated. Both Wade and Vaid-Menon addressed this in their performances at Femme in Public and in interviews prior to the show.

“It is simultaneous, complicated and constantly shifting,” Vaid-Menon said. “Being non-binary is not necessarily about what we look like and what we do, it’s more about who we are in a more fundamental or spiritual sense. What I’m doing with my style and my public visibility is of course informed by my identity, but isn’t synonymous with it.”

For Wade, dressing up the way that they want in their appearance is a form of freedom and self-reclamation.

“I’m a big, black, trans woman!” Wade said. “Out here with heels and a skirt and a dress! That’s enough. My hips are mine, my lips are mine, my body is mine and nose is mine.”

During Vaid-Menon’s performance and in past interviews, they spoke about the reason that they create art, and how it is so intrinsically tied to responding and coping with the pain they experience.

“As an artist, I think a lot about the creation of image and culture—and with my art, including my style, I am actively creating the images I believe that can and do propel social and cultural change,” Vaid-Menon said. “In other words: I am not just trans, I am a trans artist.”

“The reason I am punished so ruthlessly is not just because I am gender non-conforming, but because I am unfettered by social beauty norms, because I am externalizing my creativity and joy in a world that polices it,” Vaid-Menon said. “In this country, we cordon off and privatize creative expression: restrict it to the screen, to the gallery. It’s not allowed to spill out into the public because doing so makes people imagine an alternative to the status quo.”

Vaid-Menon uses their style, modeling and physical self as a part of their art.

“One of the (many) failures of the English language is the inability to articulate ‘life’ as an art form,” Vaid-Menon said. “I’m not just a poet or a performer—my medium isn’t just the page or the stage; it’s the public. The way that I style myself is similar to writing a poem: I’m taking disparate feelings and images, and putting something together something that’s different than the sum of its parts. Life art, as I call it, is the most thrilling form—because I’m able to constantly shift, evolve, transform. It devastates me how this country actively represses, dismisses and degrades creativity.”

Vaid-Menon believes in fighting for the full range of gender and aesthetic expressions. The population size of gender non-conforming, non-binary and transgender individuals in the United States is not well-known, in part because official records, including the US Census, do not include data on gender identity. In their performance, Vaid-Menon performed a story between themselves, Caitlyn Jenner and a train; the story touched on how population surveys taken by even the most left-leaning media outlets often exclude gender non-conforming and non-binary folx because of their inability to label them within the existing binary.

“There is no “one” way to look, be or act non-binary,” Vaid-Menon said. “There are as many as there are non-binary people! The problem is that we eclipse all of the nuance, all of the variance, and we generate popularized renditions of what gender fluidity ‘is’—which is almost always the most palatable (white, thin, hairless, subdued, etc). I believe that we can hold space and admiration for all ways of being!”

Language as a structure of assimilation

Both Vaid-Menon and Wade work with language and communication in their own separate mediums. Vaid-Menon uses language within their poetry and performance art and Wade uses language within her opportunities to collaborate with different artists and activists and as a speaker and community organizer. In the English language, the vocabulary within it can be so entrenched in colonialism, patriarchy, misogyny, racism, etc.

“I say fuck that and fuck you,” Wade said in response to that entrenchment. “I’ve been taught that I’m not supposed to talk urban to their knowledge, to what language is. When I finished college, I thought I was a white woman in a bottle. This is a structure they teach me, teach us to assimilate. To forget the people who are working class, black/brown and poor; language is not accessible to them.”

The disparity of language in academic spaces often translates over to national organizations looking to help or aid marginalized folx, but they often use language that is “very privileged, very inaccessible” to the same people they try to serve, Wade said. Vaid-Menon, too, recognizes that dilemma between the language they use and language that is accessible to queer and trans artists of color.

“We are trying to do the impossible: translate the intangible into something to touch or feel,” Vaid-Menon said. “There is something devastating and, at the same time, so profound about that constant dilemma: approximating the meaning we want, but knowing that we will never actually achieve it. So yes, there is a simultaneity it all: I am using language saturated in destruction to create. But that is the paradox of living, I think. I prefer to think that artists—and especially queer and trans artists of color—are finding ways to repurpose—to take a grammar that was never meant for us, and to use it to undo itself.”

Collaboration is interconnected and necessary

Vaid-Menon is excited about the queer, experimental and political performance art and culture coming out of Chicago.

“There are so many luminaries coming from the Chicago scene that are doing work that is totally out of this world, like Imp Queen and the Vixen,” Vaid-Menon said. “Every time I’m in Chicago I’m immersed with some of the best queer and trans thinkers and do-ers around!”

Wade previously worked with Vaid-Menon when Wade was working in Tennessee. They initially met when Vaid-Menon was working on a project at Vanderbilt University, where Wade was setting it up. They also worked together on a performance in Nashville.

Wade founded the TNTJ Tennessee Trans Journey Project while she was living there, but left Tennessee after years of work that was “fifteen times harder” if you didn’t fit “the social norm.” Vaid-Menon launched a farewell fundraiser for Wade to lead.

“If you’re not a white gay person in Tennessee, you wouldn’t get nowhere,” Wade said. “I moved back to Chicago because I needed an anchor, and it’s where I’m originally from. [Vaid-Menon] had seen that I was not doing well, that the work I was doing was being shut down because the South is very oppressive to people of color.”

Wade feels good to have a friend and comrade in Vaid-Menon, who is always present in the work that they do.

“It feels good that [Vaid-Menon] does not give a flying fuck what people think, but at the same time, they do,” Wade said with a laugh. “I’m happy that they’re always there. We rarely talk much, but when we do, we do a lot of work and talk a lot.”

Vaid-Menon often collaborates with other artists, citing that they are “bad at doing things alone,” which is why they prefer to work with other people.

“I really believe that art is a form a magic—in that we make things with our hands that we can’t recognize with our eyes,” Vaid-Menon said. “When people bring in different experiences and energies—then we’re able to create something we never thought was possible. Besides, it’s a really great way to get to know people—some of my best friends are people who I’ve worked on art projects with. Because yes, we are making a product, but we’re also making our lives at the same time.”

For Wade, it’s impossible not to work and collaborate with other trans and gender non-conforming folx, because everything she does is interconnected.

“I have no other choice, now that I’m moving forward, to help everyone else move forward with me,” Wade said. “When someone gets left behind, then we’re all left behind. We need to understand that as humans, we are not just singular bodies, we’re all intertwined.”

Femme in Public (Chicago) occurred on June 19 at AMFM Gallery 2151 West 21st Street as a preview for Vaid-Menon’s poetry chapbook. You can purchase their collection of poetry by visiting alokvmenon.com/store/femmeinpublic. Vaid-Menon, along with other artists, will be featured guests at Queer Summer Solstice on June 21 at Berlin Nightclub 954 West Belmont Avenue. Learn more about the event at facebook.com/events/128077534732555.