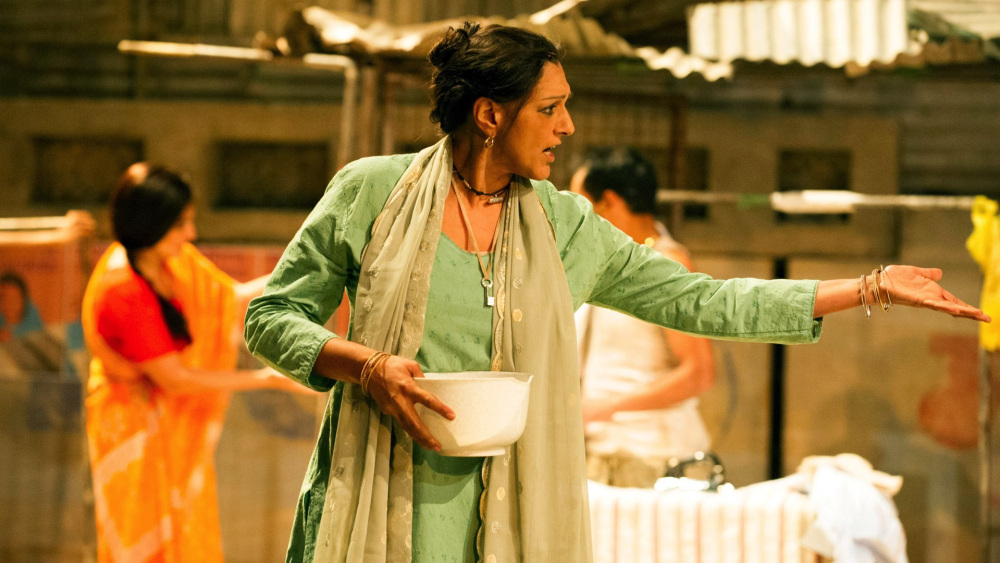 Progressive Cultural Appropriation: The Intersection Between the National Theatre’s “Behind the Beautiful Forevers” and Chicago Theaters

Pictured above: Meera Syal as Zehrunisa in Behind the Beautiful Forevers/Photo: Variety

Playwrights love to give voice to the voiceless. But does it always work in practice? To investigate this question, I examined a play from a few years ago: Behind the Beautiful Forevers by David Hare, and contrasted so-called “voice-giving” in the case of Forevers at the National Theatre, with voice-giving in Chicago, IL, at Free Street Theater.

After three years of living among the people of Annawadi, a slum in Mumbai, India, and recording their stories, Katherine Boo turned the stories she observed into a book. It became a New York Times bestseller.

Behind the Beautiful Forevers: Life, Death and Hope in a Mumbai Undercity was released in 2012. Soon after, a play was pitched to Boo—an idea which she originally turned down. Eventually, she agreed to it, and Forevers was picked up by American producer Scott Rudin to become a theatrical production staged at the National Theatre in London, England two years later. Hare adapted the production and Rufus Norris directed it.

The play unflinchingly exposes inequality and injustice in India. Well-researched and moving, it represents the lives of multiple people living in the slum from Abdul, a pensive trash picker, to Zehrunisa, a fierce matriarch. Work by Chicago theater makers at much smaller theaters like Free Street Theater also exposes inequality and injustice; however, unlike the former, the latter does not represent others but allows storytellers to represent themselves. Theaters like the Goodman Theatre have partnered with smaller theaters like Albany Park Theater Project and given a platform for storytellers to speak for themselves.

Annawadi’s inhabitants are some of the world’s poorest people—some earning $2 a day—and they squat on government-owned land. During Forevers’ journey from book to play, there was a recurring suggestion that Western audiences were hearing from the Annawadians themselves. Yet can you actually hear from those people when another playwright is giving you the final word? It was this suggestion that obfuscated the play’s original sin of cultural appropriation.

Despite my claim, Forevers was widely lauded and thought to be progressive. Sunil Khilnani, a renowned Indian scholar and conveniently, Katherine Boo’s husband, sanctioned Forevers (The Guardian felt it necessary to add a footnote stating “the fact that the author is married to Katherine Boo, in line with The Guardian’s editorial code.”). It was given four stars by Michael Billington of The Guardian who called it a ‘triumph’. An audience member was quoted saying, “Forget Slumdog Millionaire–this is the real story.”

The difference between Forevers and Slumdog Millionaire is that the latter’s makers did not try to make their project appear progressive. In Slumdog, most Indians live in slums and anyone can win in global capitalism. The entire film is an appropriation of an Indian cultural form, the Bollywood film.

Conversely, Forevers is a critical and thoughtful examination of inequality. Principal characters include a disabled sex worker who proudly reclaims her identity, and a young female character seeking to educate herself in resistance to the patriarchy.

Yet while the play itself is thoughtful, the process by which it was made was anything but. It involved the practice of lifting stories from the marginalized for the West’s material benefit. Plays like Forevers are somewhat common in American and British theater and reify a system of material accumulation by excavation of narrative capital from the world’s poor. Plain and simple, it was cultural appropriation.

But it’s difficult to question the validity of high art because of the cultural shield put up by people like Rufus, Norris, Boo and Khilnani (Hare was absent from most interviews): if these elites say it’s an intellectually legitimate piece of art, then it must be, we think.

Boo first admitted she had reservations about the book becoming a play. She said no at first. Then she went out of her way to first ‘check in’ with the residents of Annawadi before pursuing a theatrical version of the play.

In making knowledge of her ‘ask’ public, Boo suggested to audiences and critics that her privileges were set aside for the moment. That by earning the verbal permission of the people the play depicts, Boo’s project passed a test of ethics that canceled out the chasm between her position in life and theirs.

Yet Boo asking for permission was evidence of her privilege, not relinquishment. If the Annawadians had rejected her idea, she still could have pursued the project. Since Annawadians have no material or social clout in the West, no legal or public recourse exists for them to denounce the play after, if, say, they didn’t like how they were depicted.

In addition to Boo’s proclamations about a so-called collaboration, director Rufus Norris just couldn’t keep quiet about the representation in Forevers. What pride he had, remarking, “If you look at the work I’ve done even on this stage, three of the four last one I’ve done here have been very culturally diverse.”

Norris also noted that “it would have been difficult [to do Forevers ten years ago] from the simple pragmatic point of view … there hasn’t been a wealth of strong actors in [the South Asian] community”, implying that marginalized communities will come to the forefront when they are ready. The reality is we will hear from them when institutions like the National are willing to provide them with a platform.

Years before Forevers, David Hare spoke about representation in his play Via Dolorosa.

To justify not casting his play with British-Jewish actors as Israeli-Jews, he commented:

“would seem ridiculous if they tried to enact little dramas opposite, say, a couple of Arabs and the odd light-skinned Pakistani—the only people in London available to play Palestinians. It seemed impossible that it would achieve anything you could call ‘authentic.’ Or ‘real.’”

Here we are caught in an ‘authenticity’ bind: two of the actors in Forevers are Sri Lankan (Thusitha Jayasundera and Hiran Abeysekera). Another is South African, of mixed race (Vincent Ebrahim). And none, in fact, were Annawadian. So Norris’ claim that the National Theatre couldn’t have done a play like Forevers ten years before it was made—because there wasn’t a “wealth of strong actors” in the South Asian community—justifies the National Theatre’s exclusion of South Asian actors, as Hare justified the exclusion of Israeli-Jews and Palestinians in Via Dolorosa.

A more truthful reflection would find that in both cases, representation—or empowering the people whose stories these are to speak them—is irrelevant, except when it benefits Hare or Norris in granting them moral and ethical credit. Norris brings diversity to the National Theatre, and Hare, apparently too concerned about authenticity, prevents a ridiculous-seeming production of his play.

So, despite Boo and Norris’ propagations of the progressive nature of Forevers, at the end of the day, it was high trickery. It was art that very effectively engaged with people on an emotional level, but it robbed the people it purportedly existed to serve.

There was the lingering idea around Forevers’ that this play was an improvement of Western cultural depictions of India, in particular, Danny Boyle’s Slumdog Millionaire. Ironically, Danny Boyle set up trust funds for the slum children of the film. Boo, in 2012, said that she refused to give one of her subjects 10 rupees (15 cents) when she was asked once because it’s ‘a violation of ethics.’

So how is it all to be done? How are theaters to ethically give voice to the voiceless? It’s already being done, whether people realize it or not, at small nonprofit theaters—like Free Street Theater, where creators with underrepresented stories are given the resources to write, devise and act in a show. In doing so, they represent themselves. Take, for example, Free Street Theater’s show DOPE, a play about the marijuana industry which allowed youth of color directly impacted by drug enforcement and incarceration to speak about the issue. Or take Albany Park Theatre Project’s production Home/Land, a play about the violence of borders, which depicted the ensemble’s own experiences with such violence. In this way, the individual is put on the backburner.

We are not doing this to further playwrights and writers—rather, we are doing this to amplify voices that cannot be heard because of a lack of access.

This is when theater is truly revolutionary. How can we culture-jam and hack institutions? By being a sound system. Often, the subjects have already made music, it’s just not being broadcast. They don’t need us to tamper with their music, they just need it sent out on the major airwaves. And who has access to those major airwaves? You.

Institutions that want to hear stories from places like Annawadi should listen more closely and should consider just whom they are listening to. Institutions should take after the theaters in Chicago that put speaking for yourself over speaking for others.

Learn more about the book Behind the Beautiful Forevers by David Hare here and the play Behind the Beautiful Forevers at the National Theatre here. Free Street Theater’s Rest—a new, interactive performance about rest, liberation—will be performed at various parks throughout Chicago starting on July 7 at Gage Park at 2415 West 55th Street, between Western Avenue and Garfield Boulevard. Learn more about the show and upcoming performances at freestreet.org/rest-summer-show.

Dylan Fahoome studied playwriting at The Theatre School at DePaul University. He writes and performs in Chicago. He will play a Lost Youth in Prop Thtr’s production of “Neverland” this fall.

Dylan Fahoome studied playwriting at The Theatre School at DePaul University. He writes and performs in Chicago. He will play a Lost Youth in Prop Thtr's production of "Neverland" this fall.