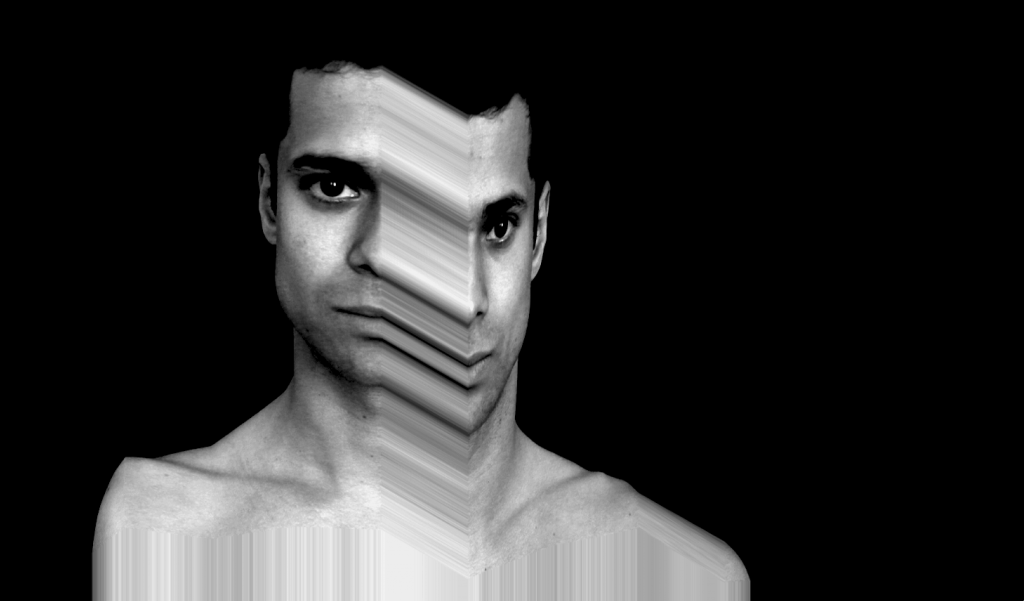 Beyond Form: A Partnership of Spiritual Vision and Brutalist Flesh at Elastic Arts

Entering the performance space was like walking into an auditory Jurassic Park, but if its creatures were mechanical. Electronic chittering, racing zooming sounds, deep growls, the occasional flute interlude: all supplied by DJ Andy Ortmann in his pre-show DJ set.

The schedule for Elastic Arts’ performance series Beyond Form was an experiment in itself.

“The pieces are intentionally reconfigured together,” explained artist Kim Alpert.

From July 27 to 29, Elastic Arts presented two works: Scan Lines by Kim Alpert and FRGMENTS by Julien Bayle. On the first night, FRGMENTS opened the show, followed by Scan Lines. On July 28, Scan Lines opened. And on the last night of July 29, both pieces were performed simultaneously, followed by a moderated discussion with the artists.

On July 27, Bayle’s FRGMENTS was the first performance—the “brutalist flesh” of the series’ title. The video component began with the backs of his subjects’ heads. Slowly, they turned, and the accompanying sound made it suspenseful. There was a sense of something building, of something great and terrible in scope, of chaos unleashed. The portraits spliced themselves, becoming collages of many faces from different angles, divided by lines, all moving independently of one another.

The sound component felt like a physical force— it massaged, pelted, pummeled and grated me. The waves of curated noise with interludes of rhythmic drum beats and cymbal crescendos washed, rinsed and wrung me. There were moments where I wanted to cower under my chair and then others where I wanted to grab the nearest glow stick and rave. Color footage superimposed over black and white footage of the same person suggested life and death.

Bayle described this kind of experimentation with audio/visual feedback as “controlled chaos.”  He created a modular visual system that “was able to play parts of the video.”

“Not just from the beginning and going to the end; it takes specific frames of video,” Bayle said. “This is a dynamic system that is listening to sound. The program is listening to sound and extracting specific features in real time. And I can change it—if I add more noise, the visual system will respond to the noisiness and add more splices to the picture.”

Bayle credits his background in science for his penchant to explore outcomes exhaustively. He approaches the different elements of FRGMENTS—the raw footage, its individual frames, and the splices of the frames, the sound recordings—as building blocks.

“They are like atoms, and you can break them down and make new elements with them.” Bayle said; for him, this project has personal meaning. “I was in a place where there was a lot of disruption in my life. This project is the crystallization, the aggregation of all kinds of disruption into one place.”

“Our process is very related to experimentation,” Bayle said. “We both have created systems that are part-automated. The system can do almost anything at the beginning, and we are choosing and constraining the responses.”

Having only experienced each other’s works for the first time at Elastic Arts, Alpert agreed that the pieces intersected in interesting ways.

“While the pieces have contrast to each other, the style of staging work in different ways, improvisation and the role of the audience in art are areas where Julien and I overlap in our interests as artists,” Alpert said.

Alpert’s piece Scan Lines is a world premiere. Dancers Cristal Sabbagh and Jasmine Mendoza moved in front of a video projection of themselves in real time that was in constant and kaleidoscopic flux. They interacted with unseen forces and obstacles—sometimes flowing, sometimes spasmodically jerking as if their bodies were shutting down.

Between the live dancers, their stark shadows and the video projection, it was like seeing the something exist in at least three different planes of consciousness at once. The waves colorful scan lines that disrupted the projection floated ever upward, and the improvised music (Paul Giallorenzo on keyboard and Anton Hatwitch on upright bass) languidly evolved from low droning to melodic and mournful.

Scan Lines was born of Alpert’s experiences of loss and her search for her own grieving and healing process. She cites being raised with “a deep spiritual consciousness that didn’t root itself in any one religion” as a foundation for her journey.

“For me, we go through so many deaths in our lifetimes,” Alpert said. “We have an amazing ability to become someone new, evolve, change, to and for ourselves or others, we can allow who we were to die and become anew. In the physical form of death, as we know it, my belief is that our energy transfers into another form, but is not gone.”

She said she left it up to the dancers to decide “who was coming and who was going” in their improvised performance.

In the development of her personal grieving process, Alpert experimented with meditation and dimethyltryptamine, a chemical substance that occurs naturally in the human body, and is most notably released during the dying process.  Like other psychoactive substances, it has a history of spiritual and religious use.

One of these meditations experiences directly inspired her performance.

“The concept for Scan Lines came directly from a vivid meditation after the sudden and horrific death of my beloved dog,” Alpert explained, “While I was not allowed to see her before her cremation, I did, in my meditation, hold her as she transformed into light. Perhaps due to being a video artist, this experience was very similar to experiments with analog feedback and cameras I had been doing in my studio.”

Alpert met Bayle while on tour abroad last year, when she visited his studio in Marseilles. When Elastic Arts approached Alpert to do a multimedia project, she drew Bayle into the fold.

“In some ways, they were in sync; in other ways, they complemented each other,” said Elastic Arts director Adam Zanolini. “They have very different levels of energy.”

I asked both Alpert and Bayle what they thought about the order of the performances, which were flipped on Saturday night, and then performed simultaneously on Sunday.

“Having Julien go first, this was more aggressive,” Alpert said of Scan Lines. “I could feel it influence the performers.”

“I’ll be really happy to play [FRGMENTS] again tomorrow because it will have been influenced by Kim’s performance” added Bayle. “Tonight, for me, it was moving me more. I was more inside it.”

Beyond Form: a partnership of spiritual vision and brutalist flesh was presented at Elastic Arts July 27 through July 29. Check out upcoming performances, festivals and events at elasticarts.org/events or email info@elasticarts.org for more information.

Kim Alpert will be collaborate with dancer Jasmine Mendoza again in Beben Von Kobra, an improvising quartet, at Elastic Arts. Alpert will also perform at Sleeping Village as part of Steve Hauschildt “Dissolvi” Release Show, and at Red Bull Music Presents: Round Robin.

Julien Bayle is working on a new installation, Traces, which he plans to bring to Chicago.