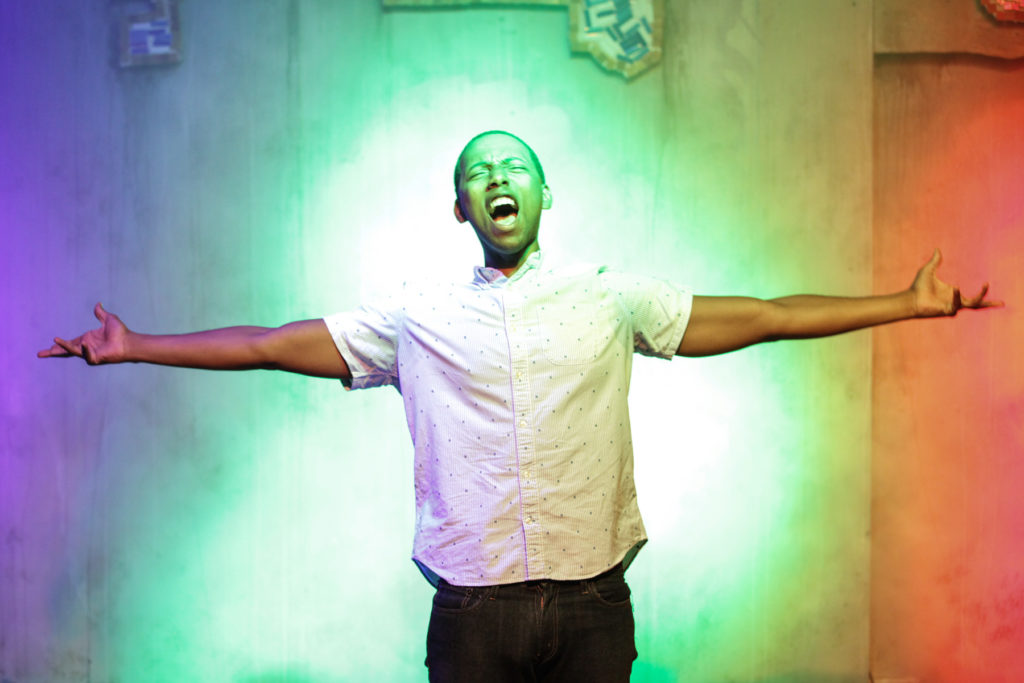 Afraid of What We Don’t Know: A Solo Expression of Defacing Michael Jackson

Editor’s Note: This is an expression by Ellie Danisch in response to Defacing Michael Jackson in a reflective form.

Coming into this production, I had clear expectations of the style, theme and flow of the story. These expectations were produced solely on the small description that was featured on the production team’s website, and I know! It was wrong of me to manufacture so many previous impressions before seeing the actual production but we all do it though….right? Although, the surprise and conscious shock I received watching, Defacing Michael Jackson midway through, did in an odd way, forgive my misdoing.

I think that all of us have had a favorite cartoon or animation that either felt like home or spoke to us on a deeper level that life (in its current moment of existing) didn’t give to us. This a powerful feeling and it may be why some of us turn to art, colors or stories as we grow up, so that the feeling doesn’t leave us.

Not only did the show Defacing Michael Jackson carry this power in its style, for there were numerous amounts of easy-going dance break that lit my face and felt sincere, but it was also indulged for the characters. Each character thrived and healed from the heroic spirit and music mastery of Michael Jackson.

What starts off as a playful, almost party-like atmosphere, alters into a conversation about financial and racial privilege and what it means to live in a black and white world. The set is based in the 80’s, but what’s most interesting (yet not surprising) is that I saw that the stereotypes living in the world of the play are still transcending in the 21st century.

In addition to the conversation surrounding race, what was most beautifully sought out in this production was the idea that destructive people turn others into destructive people. It is a continuous cycle of abuse that families or friends carry down into the next generation. It is a troubling yet true topic that most may not discuss for their own personal demons, yet the main actors in the play, Jory Pender, Christopher Taylor, Eldridge Shannon III and Sam Martin, speak this truth passionately. So how do we remove these violent aspects of ourselves and reflect, rather than continue to hurt somebody else?


This in a way, is the fight for each of the characters. And even though the resolution of the production may be dull or unrealistic, there is something about the violence portrayed and seeing these characters for what they are that is thrilling for the stage. This show broke boundaries and made me uncomfortable during certain scenes, which means, that the actors, directors, producers, and even set designers broke the boundaries for atypical theatre functions. Shoutout to you.

Performances of Defacing Michael Jackson occur at Stage 773 through August 12. For more information and tickets, visit flyingelephantproductions.com and stage773.com.